Netsuke are artistic toggles that originated in Japan in the 17th century. These little figures of people and animals became a Japanese import to the states as early as the 1860s. They were made of many different materials such as ivory, wood, iron, or gold. Easily imported because of their small size, this factor contributed to their status as a very collectible object in America. In Japan, people used them to hang on the ends of their medicine boxes or on their kimonos. The Milwaukee Public Museum's extensive carved ivory collection includes over 300 netsuke, many of them on display in the Asian exhibit. 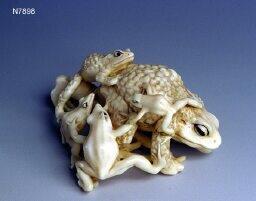