The Riverside site is located in Menomonee, Michigan  just over the Wisconsin border in Upper Michigan. It is a cemetery and village site composed of about 52 burial pits with village material in among the pits. Riverside was first excavated in 1956 and 1957 by Albert Spaulding and again in 1961-63 in a joint excavation by the Milwaukee Public Museum (MPM) and Oshkosh Public Museum. The majority of the finds from the site are now housed at MPM. Over 2,600 items were recovered from the 1960s excavations. The site appears to be transitional from the Old Copper Culture to the Red Ocher Culture, signifiers for each culture being present at the site, radiocarbon dated to 1000-400 BC. Fragments of textiles from one of the burials are the earliest known fabrics from the Great Lakes region. 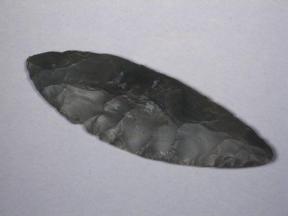