This collection came to the Museum through a 1911 summer expedition to the Hopi reservation in Arizona led by MPM Curator of Anthropology Samuel A. Barrett. The collection consists of about 3,300 items. The collection documents a wide variety of items from baskets and clothing to spiritual items, as well as pigments and tools used in their production.

Highlights from this collection include ceramics, such as the one depicted here, from Nampeyo, or "snake that does not bite," who is credited with revitalizing Southwest pottery during the turn of the twentieth century. Utilizing pot designs from prehistoric Sikyatki earthenware, Nampeyo incorporated her extraordinary abilities as an artist with ancient methods and images.

Barrett traveled to the Tewa village of Hano on the First Mesa in Northern Arizona to photograph and collect some of Nampeyo's work. Due to Barrett's meticulous collecting and recording, the Milwaukee Public Museum houses an extensive assortment of Nampeyo's work, including the materials and tools she used to create her pots.

Several items from the collection are part of the Second Floor Southwest exhibit. 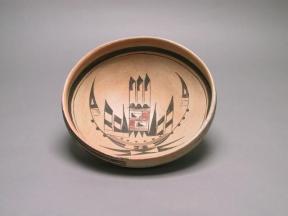