Spiro is an archaeological site in eastern Oklahoma consisting of 12 mounds. Occupied from AD 1100-1450, the site was a ceremonial, mortuary, and trade center. The elite of Spiro had the power to obtain materials exotic to the region from such places as the Appalachian Mountains, the Gulf of Mexico, and the Gulf of California. The site of Spiro Mound was destroyed in the mid-1930s by treasure hunters. Perishable materials such as textiles were well preserved and widely sold and dispersed by the looters to individuals and museums. The severity of the looting left little other than these collections as the basis for any analysis of the site. The Milwaukee Public Museum's Spiro collection is composed of 22 items, primarily textiles and sheet copper fragments. 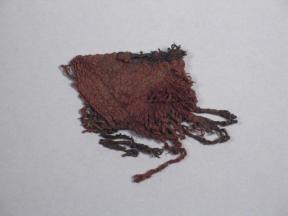