“Zeus, the father of the Olympic Gods, turned mid-day into night,
hiding the light of the dazzling Sun; and sore fear came upon men.”
- Archilochus, writing of 648 BC total solar eclipse 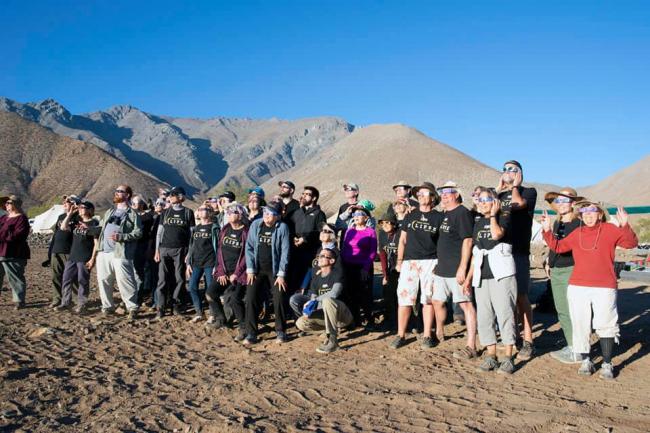 I just experienced my sixth total solar eclipse a few weeks back. It was amazing to be in the mountains near Vicuna, Chile with a group of 40 adventurers. We put this Museum trip together after so many were enthralled by the August 2017 eclipse across America.

I sit here a bit confused, wondering how to describe totality again. Eclipses can do that — leave you a little speechless.

Shortly after totality, I did quickly jot on Facebook how it was all “glorious, amazing...incredibly fortunate to experience another eclipse of the Sun! Perfect day, great people, stunning beauty.” That’s all true of course, but it falls short. It’s not enough somehow. I always feel after an eclipse that people need to know more details. Selfishly, I want to capture their curiosity so that someday they will trek the many miles to behold a total solar eclipse.

As I search for better words, my mind wanders back 20 years ago. It was soon after my second encounter with the Moon’s dark shadow. I remember describing my fleeting, wonderful eclipse moments as being “moonstruck and mesmerized.” I circle back to these alliterative words. I like them. They describe my feelings best. 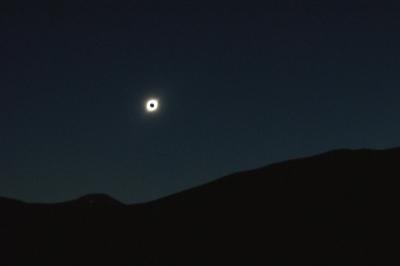 As they say, it takes two to tango. Though one hates to pick sides for an eclipse so beautiful, I will propose eclipse watchers are more moonstruck than “sunstruck.” The day is the Moon’s time to shine — figuratively of course. The Moon is only a small, black hole in the sky, casting a shadowy spell.

It’s the Sun who gets all the attention during an eclipse. Maybe it’s deserved. As a star, it’s immensely more powerful than the cold, dormant little Moon. We worship the Sun, live by its light and heat. Even with the Moon’s interruption, the Sun showcases new marvels.

During totality, the Sun’s majestic and ghostly corona is revealed. This wispy white outer atmosphere of the Sun is millions of degrees hot. It stretches from all around the solar surface with lengths up to 5 million miles. The corona radiates a different dance for every eclipse. One simply marvels at such a splendid sight. 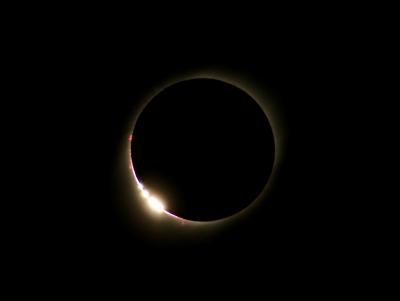 Ruby red prominences are another Sun-wonder when eclipsed by the Moon. While smaller and less noticeable than the corona, and barely glimpsed with the naked eye, these fiery filaments are exquisite through a telescope. The red comes from hot hydrogen plasma. These electrically charged atoms form loops in a tangled and twisted magnetic field powered by the Sun’s nuclear fusion core.

Talented photographers bring these solar storms to life. It’s hard to believe that one solar prominence is bigger than the entire Earth. Some can even make Jupiter look small.

Besides being barren and small, the Moon has another deficiency. It’s not perfectly round. It’s bumpy with lots of peaks and valleys. This allows the Sun to put on another tantalizing show during the eclipse — actually, two of them.

From the Moon’s first contact with the Sun until totality takes over an hour. The eclipse starts slowly. There’s not much fanfare as a tiny bit of the Sun disappears. But then, with about 30 minutes to go, the sky begins to darken slightly. People notice. Anticipation builds. With 10 minutes to go, the pace quickens. The growing darkness creeps in second by second. The sky grows more eerie. Colors change their hues. Shadows are sharper. The Sun’s once dominant face is now a thinning crescent. It looks like a sliver Moon through the eclipse glasses.

Terrifying totality nears. The Moon’s shadow is racing across the Earth, engulfing anxious eclipse watchers. The Sun’s brilliant, bright door is just about to be slammed shut. Hearts race. The last drops of sunlight shine through the lunar valleys with about 10 seconds to go. These dotted sunbeams are called Baily’s Beads. The last gasp of solar radiation through the last valley is called the diamond ring. The spectacle is dazzling, breathtaking. We were mesmerized.

Then it all happens again when the Moon decides it done with the Sun. A second diamond ring appears. Another set of Baily’s Beads appear. The Sun quickly reasserts itself. So much so that eye protection is needed. A pale, human sadness rises with the returning light. Over already?

But this despondency lessens and the joy comes back as minds and hearts realize how incredibly thankful they are to witness a rare total eclipse of the Sun. The celestial show is over, or mostly over. It takes another hour plus for the Moon to completely move on.

Our star had to take a backseat. Sure, it put up a good fight with the Moon. It showed off its amazing corona, powerful prominences and gorgeous diamonds of light. But the Moon won. And we were moonstruck and mesmerized that our little night light could achieve such a feat. 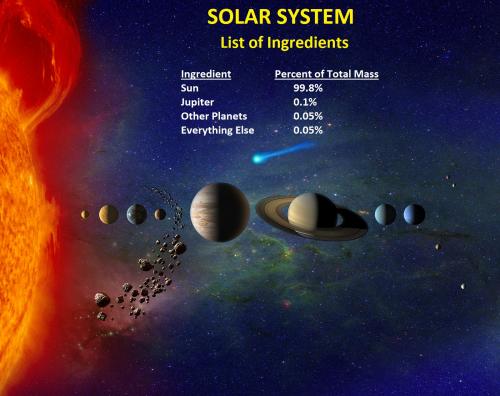 If you took all the comets, asteroids and meteoroids — all the debris in our Solar System — and weighed them all together, they would add up to less than 0.05 percent of the total Solar System’s mass.

This seems very strange when you realize there are trillions of comets, millions of asteroids, and countless meteoroids. The phrase “tons of small stuff” doesn’t necessarily mean it all weighs a lot — at least in the Solar System.

The smallest of these ingredients, the meteoroids, will put on a show this August with the Perseid meteor shower. A warning, though — the Moon is nearing its full phases and will wash out many of the fainter “falling stars.”

Since meteor showers start to ramp up many days before peak, we suggest trekking to dark skies earlier than the Perseid peak, when the Moon sets a little earlier. The peak days are the pre-dawn skies of August 11-13, so it may be worth it to check out darker skies from August 9-10. 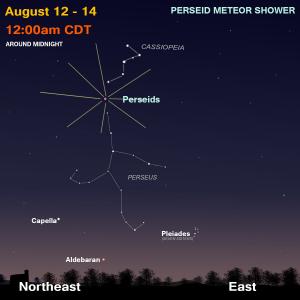 The tiny rocks radiate out of the constellation Perseus. However, don’t look for Perseus to see the meteors. They streak all over the sky. You can trace their origin back to Perseus to make sure it’s a Perseid and not a random meteor.

It’s always best to just lie on a lawn chair or blanket and simply look up. The stars of Perseus clear the horizon by midnight so it’s always best to observe meteors in the morning sky. At 3:00 a.m. or 4:00 a.m., Perseus is even higher and more meteors are visible. The Moon set times for the Perseids are below: 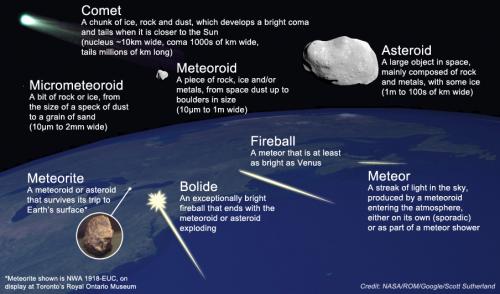 Maybe, hopefully, you will see a bright bolide or fireball. These are extremely bright “shooting stars” and simply take your breath away.

Strange that the bigger debris is the Solar System is more difficult to see. Even the biggest asteroid Ceres is not visible to the naked eye. Also, we have not had a bright comet that you can go outside and easily see since Comet Hale-Bopp in 1997!

There is a connection between comets and meteor showers. The meteoroid debris is knocked off comets as they orbit the Sun. The spectacular Perseid meteor shower is a result of the Earth plowing through the dusty trail left by Comet Swift-Tuttle. This is why meteor showers are at the same time year after year. 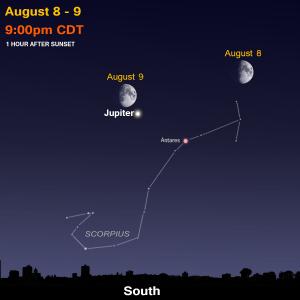 Jupiter dominates the August evening sky. Look for the king planet low in the southern sky with the bright stars of Scorpius. Spot the Moon shining nearby on August 8-9. 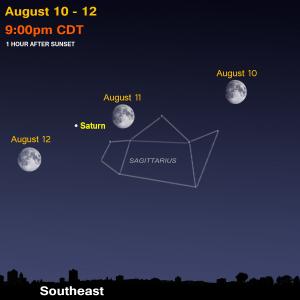 Saturn is getting easier to see trailing Jupiter in the southeast amongst the stars of Sagittarius. The Moon wonders by from August 10-12.

Mars and Venus are not visible this month. However, brilliant Venus returns later in September and grows prominent in the evening sky as 2019 comes to an end. Mars moves over to the morning sky and becomes visible in late September.

Mercury rises one hour before the Sun in early August. A patient planet-gazer can catch the elusive planet very low in the east-northeast sky, below the twins stars of Gemini. 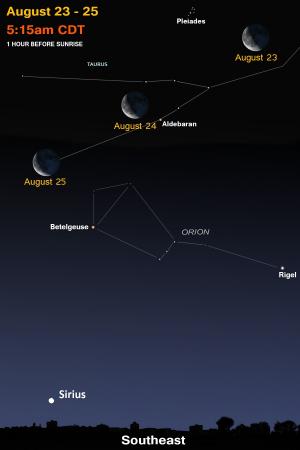 A celestial sign that summer is coming to an end is seeing the constellation of Orion and the bright star Sirius return to the morning sky.