“The remarkable thing about Shakespeare is that he is really very good –
in spite of all the people who say he is very good.”
- Robert Graves, 20th-century English writer

The English writer William Shakespeare was both creative and prolific. He wrote many memorable lines connecting his characters to the heavens above, such as:

“I am constant as the northern star,
Of whose true-fixed and resting quality
There is no fellow in the firmament.”
(Julius Caesar)

“By being seldom seen, I could not stir
But like a comet, I was wondered at.”
(Henry IV)

“O, swear not by the moon,
the fickle moon, the inconstant moon,
that monthly changes in her circle orb,
Lest that thy love prove likewise variable.”
(Romeo and Juliet)

Maybe because of these stellar lines, many of Shakespeare’s characters are now located in the solar system. The sideways planet Uranus has 27 known moons. Twenty-four of them are named after the heroes, foes, lovers, adversaries, and spirits in plays written by Shakespeare (see list below). The other three moons were named after characters from another famous 17th-century British writer Alexander Pope. These are Ariel, Umbriel, and Belinda. 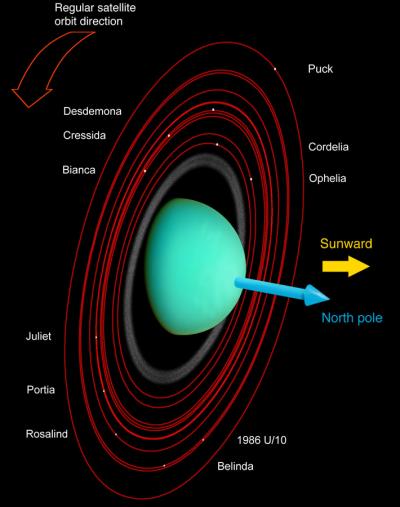 While Shakespeare loved to invoke the sky above, the main reason for naming these moons was because Uranus was discovered by another Englishman, William Herschel, in March 1781. In fact, Herschel first called his new planet Georgium Sidus, or "Georgian star," for King George III. Naming a planet after a powerful ruler worked well for Herschel. Soon after, he was named Court Astronomer by the king. 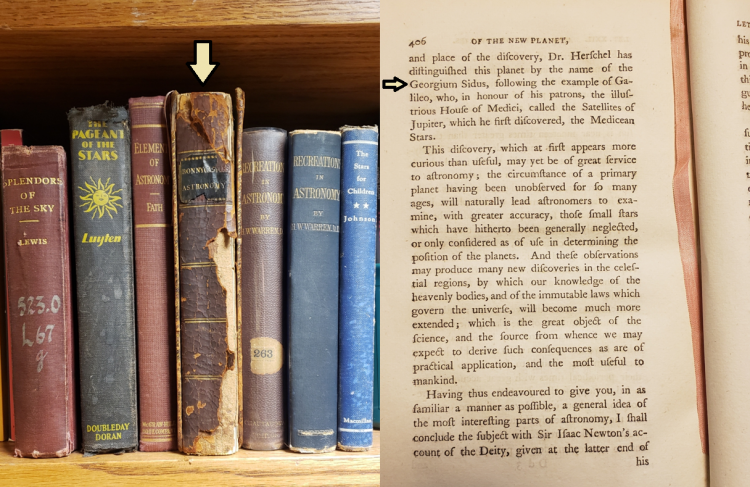 On a personal note, I have a book first printed in 1786 simply called Astronomy, by John Bonnycastle. My edition is a bit tattered, but that made the price from being less outrageous. :) I have to be careful when I pull it off my bookshelf. If you read the words above, you may find it a bit difficult. Notice the “S” is often written as “F” (only after a consonant) in older English.

The 234-year-old book lists the new planet by Herschel’s name, Georgium Sidus. The author goes on to mention that Galileo did the same thing back in 1610 when he discovered the four large moons of Jupiter, originally calling them the Medicean stars for his patron, Cosimo II de’ Medic. Today, we know them as Io, Europa, Ganymede, and Callisto. 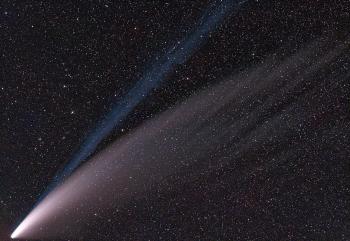 s you might suspect, other countries did not approve of the English-centered name. Uranus, the classical Greek god of the sky (or heavens), was chosen to line up with the known planets. This kept up the tradition of planet names that were originally Greek, but then renamed by the Romans using the Latin language. It took almost 70 years, but in 1850, George’s "star" finally became Uranus.

Sometimes, new discoveries are named according to what they look like. When Neptune was unveiled in 1846, its blue appearance led to thoughts of the sea. We now know the blue is caused by methane gas at the top of this gas planet, not water. Neptune is the Roman god of the sea which they renamed from the Greek god Poseidon. Its moons are named after gods associated with water in Roman and Greek mythology. For example, Triton, Neptune’s largest moon, is the son of Poseidon. 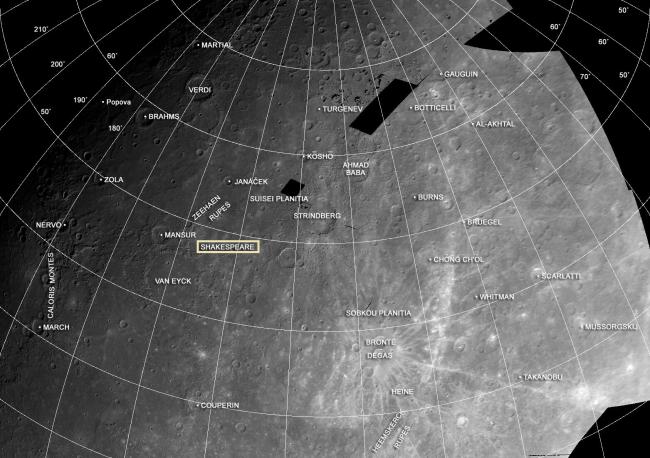 When another new planet was detected in 1930, its dark and distant nature supplied the idea to call it after the Roman god of the underworld, Pluto! Hades is the Greek mythology version of Pluto.

Shakespeare himself has a crater named after him on the planet Mercury, but so do Tolstoy, Chekov, Thoreau, Schubert, and Mozart, to name a few.  All the main craters on this little world are named after famous world artists, writers, and musicians. Mercury is definitely a supporter of the arts! 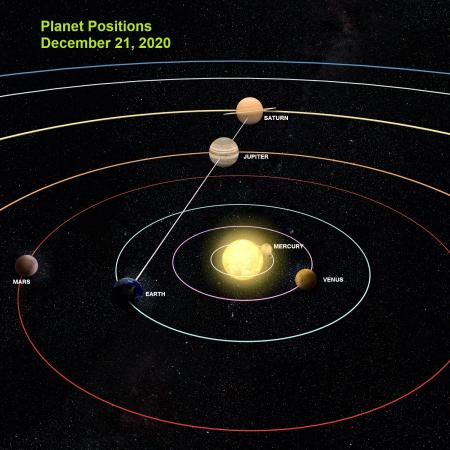 Taking the billion-mile-wide perspective, we see Jupiter and Saturn “line up” this December 21, 2020. They do this every 20 years. This time, though, their alignment is closer than it has been in almost 400 years!

This planet conjunction makes it difficult to comprehend how far apart the planets really are from each other. Jupiter and Saturn look close together in this wide-view picture taken with computer software. Even in the real sky, looking at two planets with our own eyes, the close pairing is misleading.

Think of it this way. If we took one of our best spaceships and headed off into space, it would take us about…

Enjoy the views of Jupiter and Saturn as they align in the night sky -- but take a deep breath and ponder the depths of space. 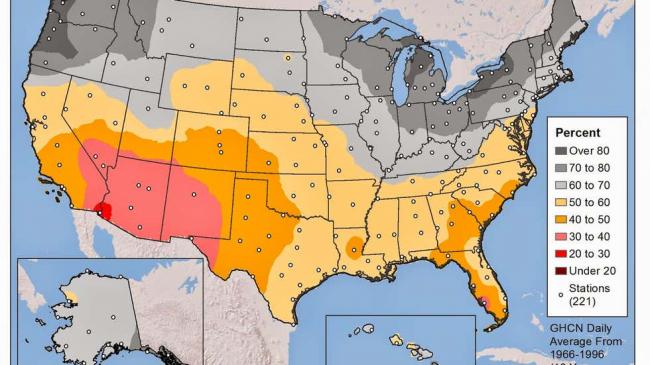 November can be a tough month. Not only do the heat and light lessen, but the stars, planets, and moon do, too. For the northern states, November grows murkier with more cloud-cover. According to meteorologists, the jet stream sinks south from Canada and more storms and bad weather increase for us in the north.

If you look closely at the chart, your chance of experiencing a sunny day or a clear night is about 20% to 30%. Ouch! Statistically, November tops the list as the cloudiest month of the year, according to Dr. Brian Brettschneider, a climatologist with the University of Alaska-Fairbanks. 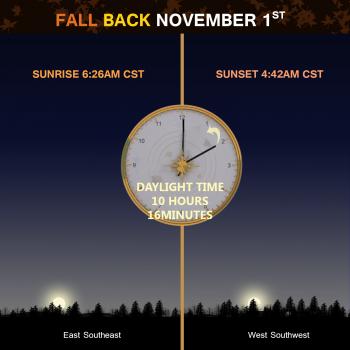 Halloween night will last an hour longer this year! We “fall back” on the first Sunday in November which is November 1.

A quick survey of recent polls reveals that 54% and 74% of us want to end changing our clocks twice a year. Seven state legislatures have asked the US Congress to stop the practice. Presently, only Arizona and Hawaii keep the same time all year long. 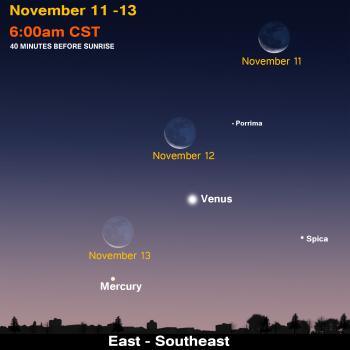 Venus still dazzles in the dawn skies, but it is moving back toward the sun. The bright planet still rises about three hours before sunrise. The Moon joins Venus—and Mercury—from November 11-13. The smallest planet will be much more difficult to spot. 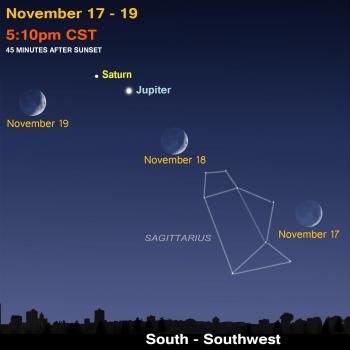 Jupiter and Saturn start November five degrees apart. By November 30, they will be 2.3 degrees apart—more than twice as close. You can measure this degree distance by using your finger. Hold one finger out in front of you. The width of your fingernail at arm’s length is about two degrees. The full moon is half a degree wide, so you can easily cover the moon with one finger.

The two gas giants will be at their closest on December 21. They will be only 0.1 degrees apart! That is 20 percent of the full moon’s width. Your eyes will barely discern them as two separate planets. Jupiter’s brighter light will make spotting Saturn difficult. A pair of binoculars will definitely enhance your view.

Watch the Moon pass these converging planets from November 17-19. 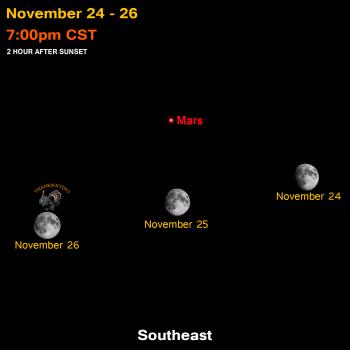 Mars is high in the southeast a few hours after sunset. At the start of the month, it rivals Jupiter in brightness. However, by November’s end, it dims significantly as its distance from Earth increases. Watch the Moon pass the red planet from November 24-26. 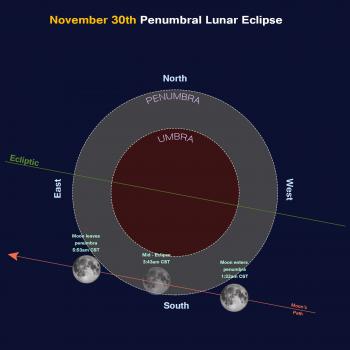 There is a very faint penumbral lunar eclipse on Monday, November 30, but it’s in the middle of the night. If your cosmic curiosity rises—or you can’t sleep—the Moon will darken slightly. Our moon puts on a more spectacular show when it passes through the Earth’s much darker—and colorful—umbral shadow.