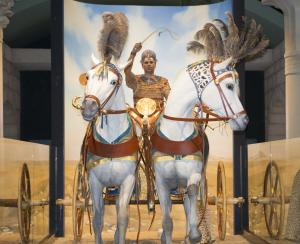 Created by MPM artist Craig Yanek in 2014, this chariot is an exact replica of one found in King Tutankhamun’s tomb. Yanek also created the forensic reconstruction of the king. The life-size Arabian horses were produced by Museum artist and taxidermist Wendy Christensen. King Tutankhamun, his chariot and horses are part of the Milwaukee Public Museum’s exhibition Crossroads of Civilization: Ancient Worlds of the Near East and Mediterranean. 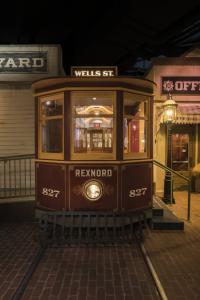 The new Rexnord streetcar entrance sets the mood for the visitor as they enter the Streets of Old Milwaukee. A showcase of the time, place, and ideas in Milwaukee at the turn of the 19th century, the streetcar helps the visitor transport to the mindset and feel of the 1900s. 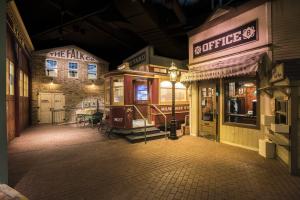 The streetcar entrance leads into the new courtyard created for the Streets of Old Milwaukee’s 50th Anniversary. The courtyard is made up the Falk Company, North Side Lumber & Fuel, the Rexnord streetcar, the Sendik’s fruit and vegetable cart, and the streetcar garage barn. 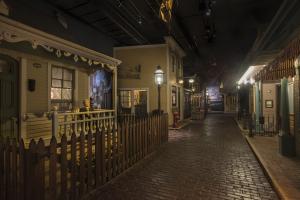 Granny’s house has been a fan favorite since the Streets of Old Milwaukee opened in January 1965. During the Streets’ reimagining, Granny’s house was fitted with a 1905 Badger water meter in the basement window, signifying water becoming available to the most affluent homes. 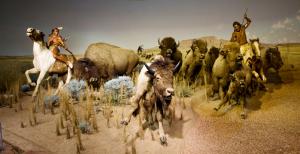 The Bison Hunt on Horseback diorama portrays an event that was a regular part of life for the American Plains Indians. The bison hunt on horseback was common from the late 1700s until the late 1880s, when the commercial hunters had nearly exterminated the bison. This diorama is in the North American Indians wing on the  Second Floor. 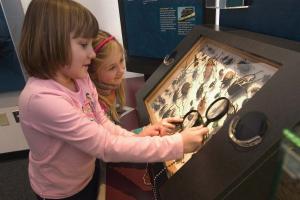 The Exploring Life on Earth exhibit explores biological diversity-the variety of life on Earth-and how it has changed over time. This exhibit is in the Herzfeld Hall of Science on the First Floor. 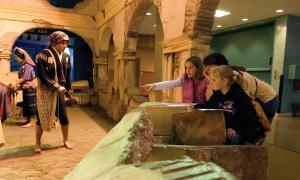 The Antigua, Guatemala - The Public Market diorama depicts Mayan Indian villagers of the southern highlands of Guatemala visiting the market for staple items such as beans, corn, chili peppers, coffee, rice and bananas. A moment from the mid-20th century is frozen in time -- the women are depicted in traditional clothing rarely seen in present times due to the influence of the modern world on the Indians' culture. This diorama is in the Middle, Central, and South America wing on the Third Floor. 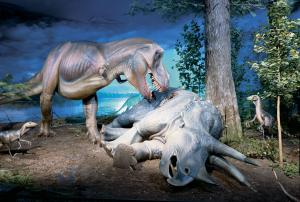 In this life-size re-creation of a lowland forest floodplain, Tyrannosaurus rex feeds upon a dead three-horned Triceratops. Three small Dromaeosaurus dinosaur wait patiently nearby to scavenge its share. This dinosaur diorama portrays eastern Montana 66 million years ago. Milwaukee Public Museum scientists documented the plants and animals depicted in this diorama from their expeditions to the Hell Creek Formation in eastern Montana. This diorama is in the Third Planet  gallery  on the First Floor. 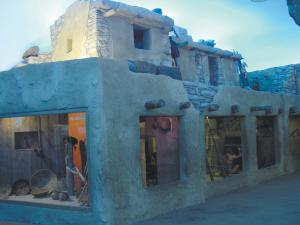 The Milwaukee Public Museum's Southwest Indian dioramas, also fondly called The Hopi House, are part of the Museum's world-renowned style of experiential exhibits, which allow visitors to feel they are part of daily activities of the Indian culture including weaving and meal preparation. This diorama is in the North American Indians wing o the Second Floor. 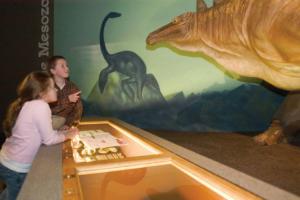 Dinosaurs -- perhaps the all-time favorite attractions of Museum visitors --are found in the Third Planet  gallery that explores the origins of life here on the third planet from the sun. Earth has been home to many life forms over the millions of years of its existence. This exhibit takes you on a journey through geologic time (measured in eras and periods) to see many of the life forms that have appeared and disappeared due to the forces that have changed the surface of the Earth over time.