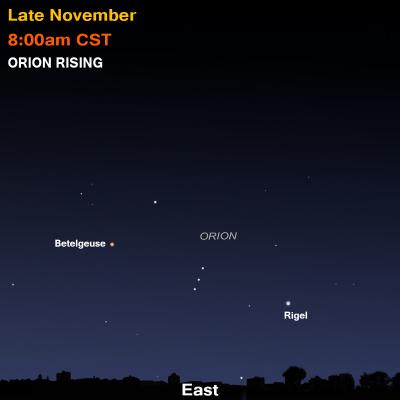 A celestial sign of colder nights is the brilliant constellation of Orion the Hunter. In late November, take notice of the three stars of Orion’s Belt rising in the east around 8:00 p.m. local time. To the right of the belt, spot blue-white Rigel, the seventh-brightest star at night. Left of the belt is orange Betelgeuse, the tenth-brightest star.

While these colorful stars are close in brilliance and dominate a winter’s night, they offer curious comparisons.

Rigel marks Orion’s left foot. The star is a blue-white supergiant 70 million miles wide. But Rigel is very distant at 800 light years away. See Rigel tonight, and you are looking 800 years back in time, or the year 1219. If Rigel switched places with Sirius at 8.6 light years away, it would be brighter than Venus and visible in the daytime! Sirius, or the dog star, can be located directly below Orion’s belt and rises about an hour later.

Betelgeuse represents Orion’s right shoulder.  It’s a red supergiant star, 520 light years distant. It’s so large that if you placed Betelgeuse at the center of our solar system, it would engulf the Earth, Mars, and Jupiter. Its diameter is about 700 times the size of the Sun, or 600 million miles.

While Betelgeuse is about 10 times bigger than Rigel, and closer, it is dimmer in the night sky. If you put these two stars right next to each other, Rigel would be six times brighter! This is called a star’s absolute magnitude, which denotes their brightness if they were all the same distance away.

Strange to think that both of these blazing behemoths could be considered baby stars. Betelgeuse is 10 million years old. Rigel is around 8 million years. Compared to our Sun, which is 5 billion years old, these two stars are very young! The dinosaurs on Earth were dead for 55 million years before these stars were born!

Rigel and Betelgeuse have another similarity. They will die young. Their hugeness means they exhaust their nuclear fuel quickly. They are destined to go supernova. Betelgeuse is on the cusp of this violent end. It could happen tonight, or thousands of years from now. Rigel is following a similar life -- like Betelgeuse, it too will balloon into a red giant star and go supernova in a few million years.

Just something to think about as you gaze at brilliant, colorful Orion in a winter night’s sky. 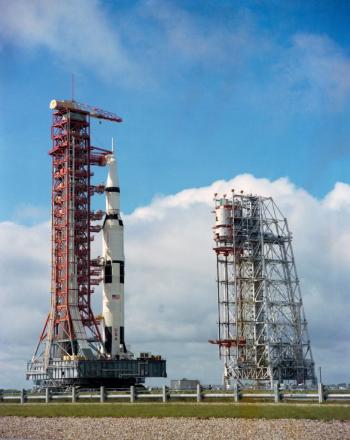 The landing site on the Moon was the Ocean of Storms. Nearby, about a quarter-mile away, was NASA’s Surveyor 3 robotic probe, which had landed on April 20, 1967. Conrad and Bean wandered over and retrieved some of the probe parts to bring back to Earth.

Apollo 12 brought the first color television camera. Unfortunately, TV transmission was lost after Bean accidentally pointed at the Sun and rendered it useless. 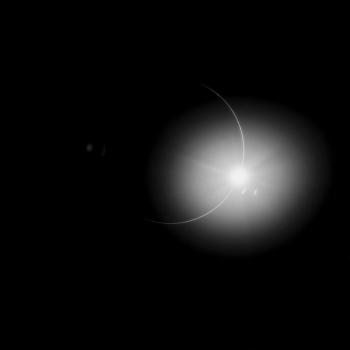 On the way back home, the astronauts got to witness a solar eclipse from space. After visiting the Moon, they saw it block the Sun’s light. “We saw this bright spot moving across the Earth and we didn't know what it was, but we could see that it was moving rapidly across the planet." The Moon’s shadow races over 1,000 miles an hour across our planet. 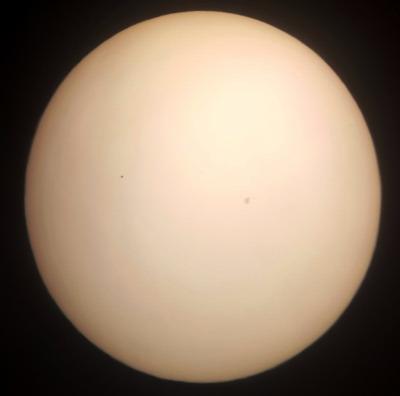 Can you find Mercury on the Sun in the picture above? It’s the little black circle to the left of center. It was taken on May 9, 2016, the last time Mercury lined up with the Sun. A Mercury transit was first observed in 1631, and was predicted by Johannes Kepler, the discoverer of the three laws of planetary motion.

This unique sky event occurs again on November 11, 2019. Telescopes with special safety filters will be available here at the Museum starting at 7:30 a.m., clear skies permitting. This will be the last Mercury transit in Wisconsin until May 7, 2049 -- almost 30 years from now! And this event will again occur in 2032 and 2039, but will not be visible from Wisconsin.

Mercury is small; a telescope is needed to spot Mercury’s silhouette on the Sun. In fact, 287 Mercuries could fit across the face of the Sun. The bigger blob-like feature to the right is a sunspot, a temporary surface feature caused by magnetic field disturbances that restrain normal solar convection. Most exoplanets are discovered when a distant planet passes in front of a distant star and its light output dims by a tiny, but detectable, amount. 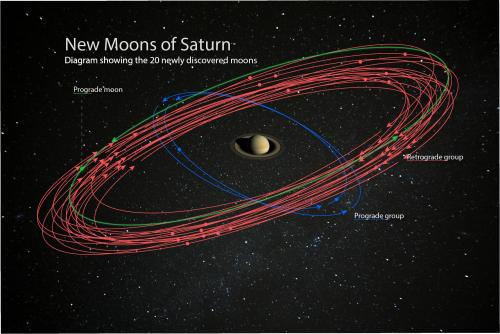 Take a back seat, Jupiter! Astronomers recently discovered 20 new moons orbiting Saturn, making this gas giant number one in the “moon race.” Saturn’s total number of natural satellites now stands at 82; Jupiter is currently at 79. Who knows if one of these planets will reach 100 moons?

These new worlds are pretty small at just a few miles wide. They help scientists figure out the chaotic origins of our solar system. Back in the day (some 4 billion years ago), the beginnings of cosmic neighborhoods were tumultuous. This swirling debris cloud meant there were constant cosmic collisions. Objects that didn’t fall and crash into the Sun and planets were left behind and became the moons, comets, asteroids, and meteoroids. 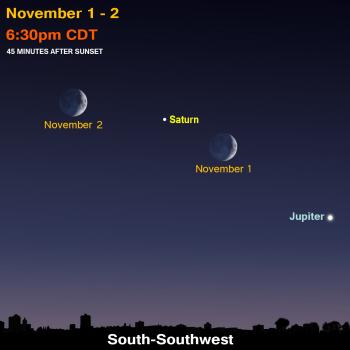 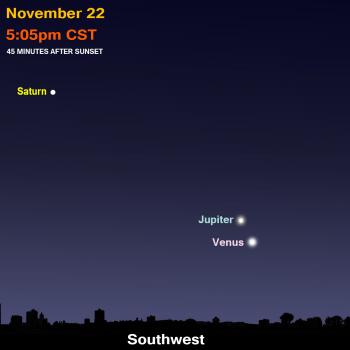 Jupiter and Saturn are sinking lower in the southwest each evening. Catch them while you can, especially with the Moon passing by twice from November 1-2 and November 28-29. 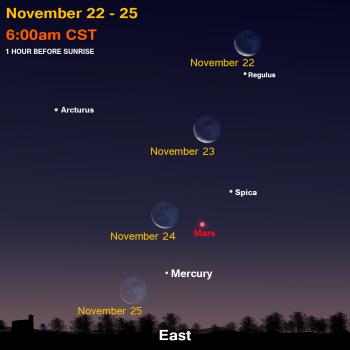 Mars and Mercury can be seen in the morning sky. The red planet will be tough to see at month’s start but climbs higher each morning. By Thanksgiving time, the “red star” will be no problem. A waning crescent Moon helps locate both planets from November 22-25. 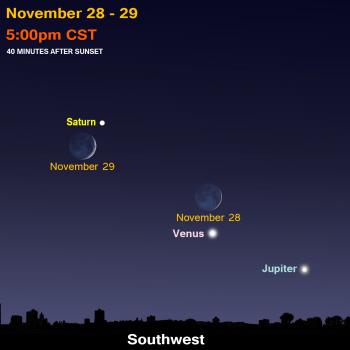 Venus joins the two gas giants at the end of November. The hottest planet joins Jupiter on November 22. As the nights progress, Venus will climb higher and be easier to see, while Jupiter will move lower and eventually disappear behind the Sun.