Dating to 1895 and depicting "Venus instructing Cupid," the Northwood Cameo Plaque is unique. Although George Woodall is considered the greatest carver of English cameo glass, John Northwood was one of the first to carve this type of glass and is known to have made only seven works on cameo glass. He sparked a period of Greco-Roman recreations on glass and revitalized British interest in Greco-Roman glass works. 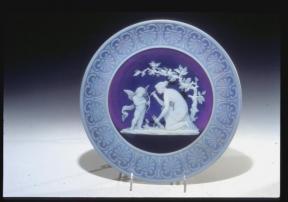