One of President Franklin Delano Roosevelt's New Deal administration policies, the Works Progress Administration, offered jobs to keep people employed during the Great Depression. At the Milwaukee Public Museum, Director Samuel A. Barrett wanted to keep his staff employed, so he designated space for murals throughout the Museum to depict different exhibits and periods in world history. This endeavor allowed the current Museum staff to stay employed during a time when many people were losing their jobs. This mural shown here is by Albert O. Tieman and is titled Milwaukee Workers Being Paid by Check in 1937. 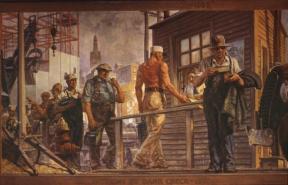