In the late 1870s, U.S. Senator Daniel Voorhees was given a Mandan man's shirt by a member of an Indian delegation to Washington D.C. The shirt was later passed on to Professor John D. Mack of the University of Wisconsin at Madison, who sold it to the Milwaukee Public Museum in 1921. This elaborate tunic style garment consists of two buckskins sewn together. Four large extensions of fabric hang down from the central and most decorated portion, and extensive bead and quillwork adorn the shoulders of the garment. Based on the amount of porcupine quillwork versus beadwork present, it can be determined that this shirt was made prior to the reservation period of the Mandan people, probably between 1845 and 1879. 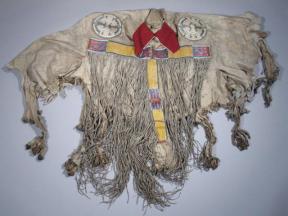