This belt was obtained along the Kuskokwim River in southwestern Alaska. The Unegkumiut, Kiatagmiut, and Ingalik groups are the most likely sources for its production. Three hundred and fifty one sets of caribou incisor teeth are attached to leather, with a fringe of Russian trade beads and fox canine teeth. The belts were made by men but worn by women as displays of the man's hunting ability. Each set of teeth represents one caribou. These belts were usually family heirlooms that were thought to have curing powers which increased with the age of the belt. This belt, the only one of its kind in the Milwaukee Public Museum's collections, is approximately 300 years old. 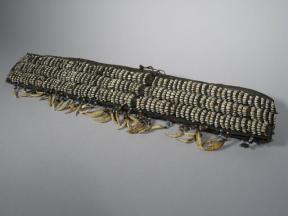