“I think you should always bear in mind that entropy is not on your side.”
- Elon Musk

Death of the Universe 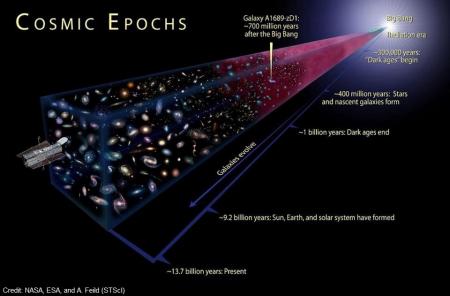 Entropy can be scary. It basically states the universe will all run down eventually. There will be no stars or planets.  Everything will be a cold, dark, diffused gas. This obviously is not a “feel good” start to this month’s Starry Messenger, so we’ll be sure to finish on a more positive note.

Entropy comes from the 2nd Law of Thermodynamics and measures the amount of disorder in a closed system such as the universe. It says that over time, an isolated system will always degenerate. Since its start with the Big Bang billions of years ago, the universe has been growing colder and more disordered.

One day — trillions upon trillions of years from now — the universe will grow dark. No stars will shine. A universe that was once inconceivably hot at its start 13.8 billion years ago will now be cold and dead. Nothing can come together to make anything new. The universe has reached thermodynamic equilibrium, or maximum entropy. This is often called “the heat-death of the universe” or the “big chill.”

This distressing fate of the universe doesn’t mean stars have stopped forming; billions of these nuclear furnaces start up every year, millions per day -- they’re just doing it at a much slower rate. A recent team of astronomers estimate that star formation is currently only one-thirtieth of what it was at its peak, and that this decline will continue. This study’s leader was scientist David Sobral of the University of Leiden in the Netherlands. According to Sobral, “The production rate of stars has dropped by 97% since its peak 11 billion years ago.” 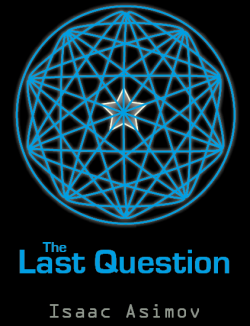 This entropy evidence shows star death is slowly taking over in the universe. Our Sun will suffer its demise in approximately five billion years. In one billion years, the Sun will grow so hot it will make life on Earth as we know it impossible.

The unease of entropy hit me personally at age 18. I had just seen a planetarium program called The Last Question. It was all about the end of the universe and was penned by Isaac Asmiov, a prolific writer of science and science fiction. The program was narrated by Leonard Nimoy of Star Trek. Asimov’s imagination took the audience to different times far into the future. At each stop, the future humans asked their computer how to reverse entropy, or, is there any method to stop the heat-death of the universe? Each time, their computer stated there was “insufficient data for a meaningful answer.” 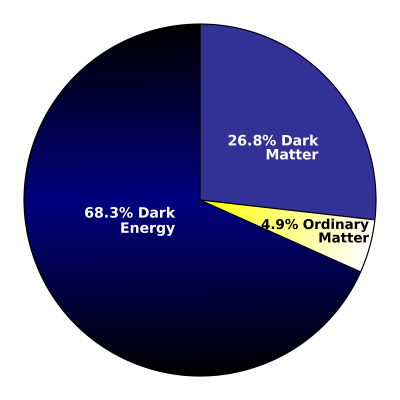 Notice the answer in The Last Question was neither yes nor no. We simply don’t know how to stop the universe from becoming more disordered, according to our present knowledge -- but our understandings always change.

Our cosmic composition pie chart is always changing. Currently, we don’t know what makes up 95 percent of the universe. Recent discoveries of dark matter and dark energy tell us there’s a lot to learn. Some physicists even speculate on multiple universes with different physical laws. Who knows? One day, we may figure out how to travel to another universe where entropy does not exist. There -- a positive ending. We did it!

Guess how many working spaceships are exploring Mars?

The answer is eight! 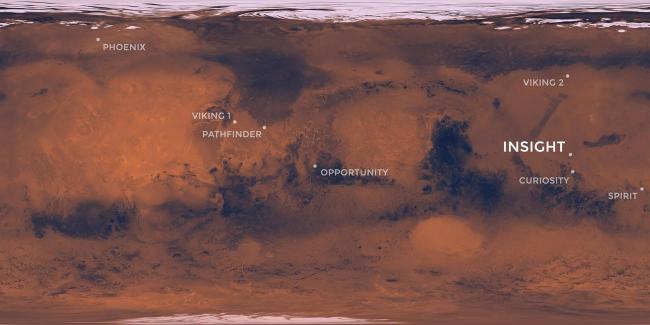 Two are on the surface and six are in orbit.  Though we should mention that NASA lost communication with the rover Opportunity on June 10, 2018 when an intense Martian dust storm flared up. Project scientists are hopeful it can be revived.

Soon, the number of robots exploring Mars will be nine, if all goes well with NASA’s InSight Lander. The craft was launched back on May 5 and is scheduled to land on November 26 — a 205 day journey.

InSight stands for Interior Exploration using Seismic Investigations, Geodesy, and Heat Transport.  Its landing spot is near the equator to maximize its energy from the Sun from its solar panels.  InSight will be just over 300 miles from the rover Curiosity which is still going strong since August 2012. 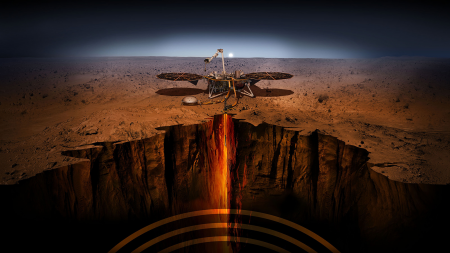 InSight is a lander, not a rover. It sits solid on the red planet.  Its grapple (think of the “claw” at the arcade) will set out all the scientific instruments. The key one is the Heat Flow and Physical Properties Probe, or HP3 for short. It will tunnel straight down for 16 feet (deeper by far than any red planet digger). The goal is geology. Besides figuring out the subterranean composition, InSight will take the temperature of Mars and learn how it formed and evolved.

Mars was active long ago but now has basically settled down into a fairly sedated world. There are Martian tremors, or Marquakes, deep inside the planet. InSight should be able to detect this seismographic data. All these underground studies will give insight on the origins of Mars and all the inner rocky worlds including Earth. 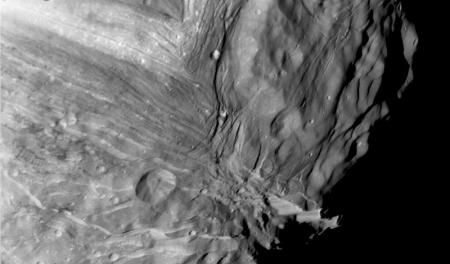 Miranda is a bizarre, mysterious world. This moon of Uranus has a 12 mile-high cliff and a strange chevron feature on its ice-rock surface. The little world orbits its gas giant parent every 1.5 days at almost 2 billion miles from Earth. The moon is only 300 miles across.

The mixed-up terrain signals an active, turbulent history. One theory says liquid water descended and froze beneath the surface. Then, it expanded as ice does, causing surface separations, or grabens. This process is similar to the potholes that form in our roads as ice expands.

Miranda is named after the daughter of the magician Prospero in William Shakespeare's play The Tempest. Most moons in the solar system were named after Greek and Roman gods but the moons of Uranus come from classic literature, namely from characters from the plays of Shakespeare. 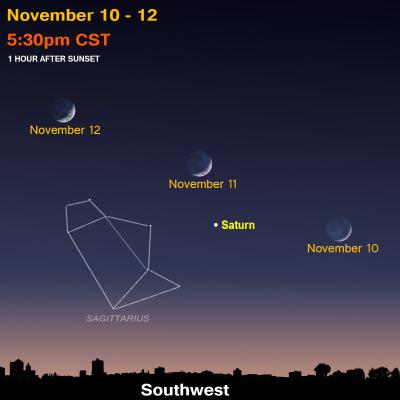 Saturn slips lower each night in the southwest.  A young Moon will help you spot the ring world on November 10-12. By the end of 2018, Saturn will be lost in the Sun’s glare. 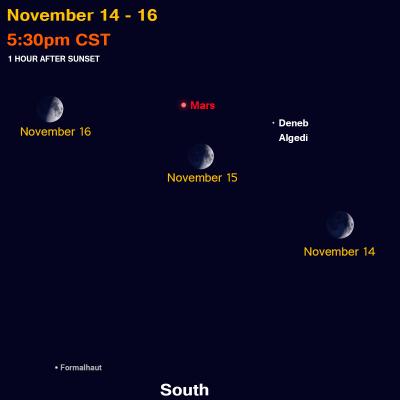 Mars dims again this November. It will shine brighter than any star until the dog-star Sirius rises later in the night. It resides among the dim stars of the constellation Capricornus. The Moon glides by the red planet on November 14-16. 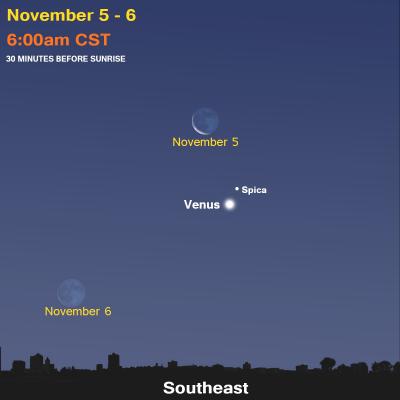 Venus returns in the morning sky for early bird stargazers. On November 1, brilliant Venus rises 35 minutes before the Sun. Try to catch it near a sliver Moon  on November 5-6. By November 30, Venus rises over three hours before sunrise and will be unmistakable in the southeast sky.

Jupiter lines up behind the Sun on November 26 and is invisible all month.  You can spot near the end of the year rising a few hours before the Sun.

Mercury is too difficult to spot this month. 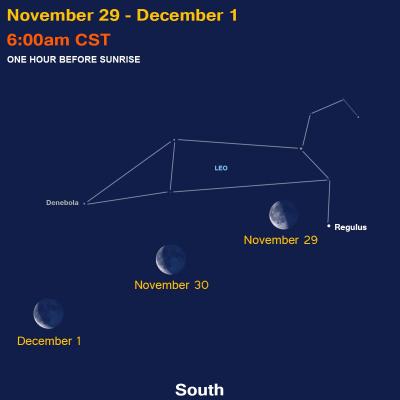 If November gets too cold and you need a reminder of spring, look for Leo the Lion in the morning sky. A waning crescent Moon will help you spot the “backwards question mark” that marks Leo’s head and heart. By March 20, Leo shines bright in the east shortly after sunset marking the start of spring in the night sky.