It wasn't long ago that clocks decorated the streets of Milwaukee. As the city grew, buildings became modernized and development continued; the street clocks were greatly reduced in number. Most clocks were removed, as they were an obstruction to urban development. Milwaukee mayor Sherman M. Becker, known as the "Boy Mayor," found the clocks to be particularly bothersome and took matters into his own hands by ordering their destruction. One morning in 1907, he and a team of firemen destroyed most of the city street clocks. In 1976, Milwaukee had only one remaining, located on the corner of South 16th and Washington Streets outside of Jensen Jewelry. Upon his retirement in 1972, Jensen donated the clock to the Museum. Thomas J. Bliffert, president of Granville Lumber and Fuel Company, donated the funds for the clock to be restored. After hard work by the Museum staff, the clock now stands outside the Museum entrance on Wells Street. 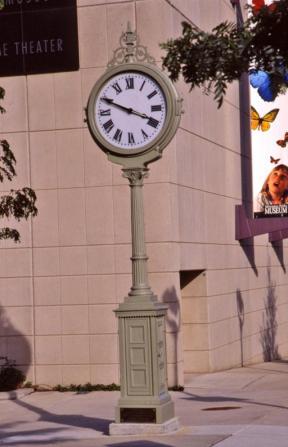 Catalog Number
N/A
39
Back to Top of Page