This first edition Darwin book, published in 1854, was originally cataloged in the San Francisco Library collection. By good fortune, the book was checked out during the 1906 fire that destroyed the building and made its way to the Milwaukee Public Museum's library a few years later.

The publication of this work not only established Darwin's reputation as a biologist, but as a result of the research, he discovered that barnacles represent a transitional stage between hermaphroditism (individuals with both male and female sex organs) and sexual reproduction. This strengthened an important insight of Darwin's – that sexual reproduction was essential for variation in species – and in natural selection, his central mechanism for evolution. 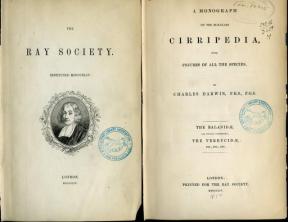 Catalog Number
N/A
42
Back to Top of Page