Park City was the original name of Kenosha, Wisconsin and the Park City Grays were the local militia. The group was mustered into the Wisconsin 1st infantry at Milwaukee and sent, wearing their gray coats, to guard Washington, D.C. at the outbreak of the Civil War. Before the Civil War, the color of the 1st Wisconsin Militia (as well as many other states) was gray. However, gray was the color of the Confederate Army as well, and at the beginning of the Civil War, the Union quickly changed their color to blue. This coat was worn by Sergeant Warren Graham in 1861. Graham, a Milwaukee native, was the first casualty of the Civil War to be buried in Wisconsin. 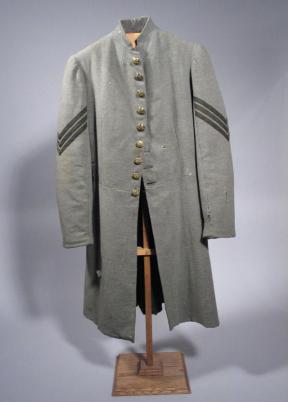