This Mitchell Civil War uniform, part of a larger group of Mitchell militia material, belonged to John Lendrum Mitchell, son of prominent Milwaukee banker Alexander Mitchell. John served in the Wisconsin 24th Infantry and rose to the rank of 1st Lieutenant. After the Civil War, John was a gentleman farmer and had a large estate in what is today West Allis, Wisconsin. He was very well educated and served in the Wisconsin legislature and later served as a United States Senator. John's second son, William, rose to prominence in the U.S. Army Flying Corps in WWI and was a strong proponent of American air power and founder of the modern Air Force. Mitchell International Airport is named for him. The Mitchell family is recognized as one of Milwaukee's first families. 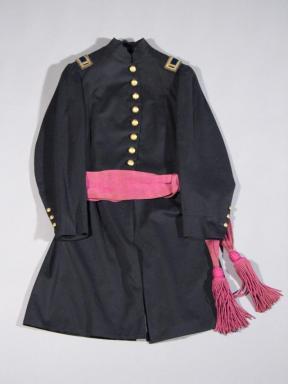