Paintings from the 19th century Plains tribes serve as narratives of important historical events. This piece was made at Standing Rock Agency (now Reservation) in North Dakota. Painted on a large sheet of muslin, 19 male figures and 15 horses are complemented by an additional 35 horse heads in the lower left-hand corner. Each individual figure appears to float on the surface of the muslin, as there is no evidence of a horizon. The scene represents the heroic deeds of the members of a Sioux group known as Gall's Band, one of the last American Indian bands to surrender to the US army, as they waged hand-to-hand combat with a group of Crow warriors. 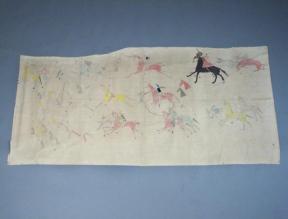