This rare thunderbird suit was acquired by Milwaukee Public Museum Curator of Anthropology Samuel A. Barrett during a 1914 - 1915 expedition to the Kwakwaka'wakw (Kwakiutl) territory on northern Vancouver Island and the adjacent mainland of British Columbia, Canada. The mask and leggings are mostly wood, while the headdress and suit are primarily eagle feathers. The thunderbird is an important figure in the Kwakwaka'wakw culture and is considered an ancestor in some tribes. The suit is displayed on the Second Floor in the Northwest Coast exhibit. 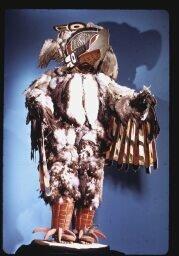