Where applicable, the classification of lamps in this collection is based on type designations that were developed by Siegfried Loeshcke, Oscar Broneer, and J.W. Hayes.

The earliest and most rudimentary clay lamp form in the MPM Mediterranean oil lamp collection is the round saucer. Saucer lamps initially were made by hand-molding but were later wheel-thrown. These lamps employed a free-floating wick until the Middle Bronze Age when saucer lamps with nozzles in the form of pinched or folded rims appeared in Egypt and the Syrio-Palestinian area. The pinched nozzle was a technological advancement that, by holding the wick in place, prevented the wick from sinking or burning up, and provided a means for focusing light. Lamps with folded rims are often referred to as “cocked-hat” lamps.

By the Late Bronze Age, the use of open-saucer lamps had spread to Greece and the surrounding areas including the Phoenician and Punic regions. During the Hellenistic Period (third to first centuries BC), Palestinian saucer lamps became more enclosed with the rims being folded to the point of overlapping. Such lamps are known as “Hasmonean” lamps, named after the dynasty that ruled Judea and the surrounding regions at that time. A large portion of the MPM oil lamp collection is made up of open saucer and pinched nozzle lamps.

Padlock lamps emerged in Greece around the seventh century BC and are named as such because of their resemblance to a padlock. They are characterized by a shallow, open body, a longer nozzle, and a horizontal handle which, coupled with their rounded bodies, gives them the appearance of a padlock. Padlock lamps were wheel-thrown, and later examples of this lamp type were made with clay slips to prevent oil seepage. 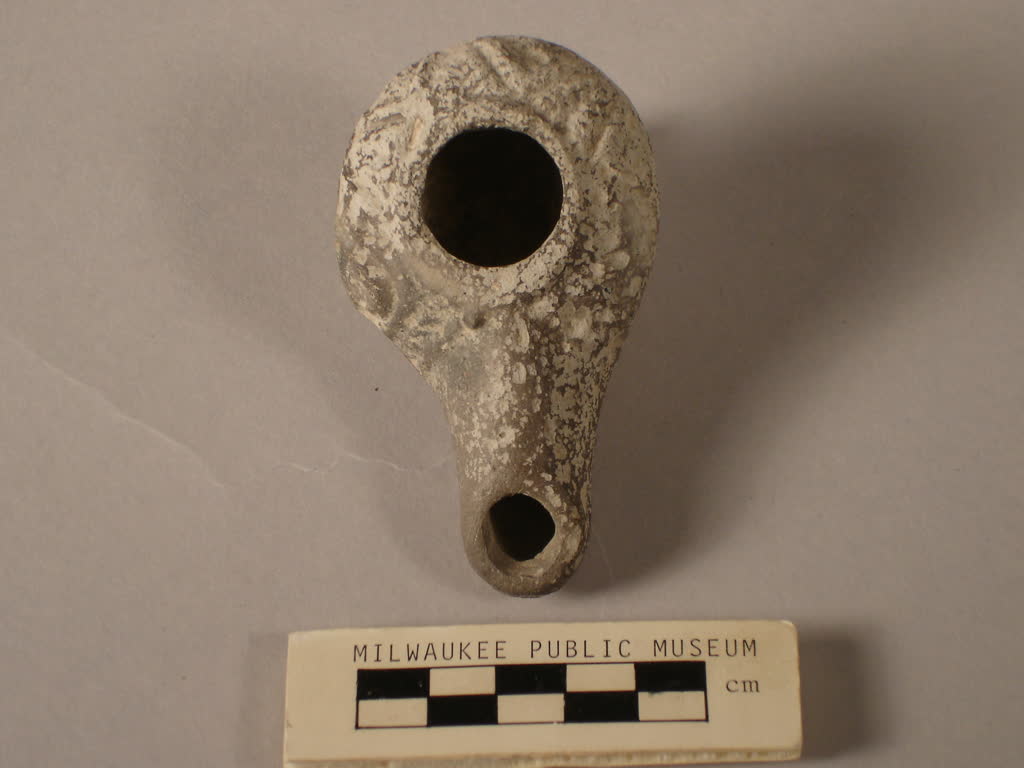 By the first century BC, Early Roman lamp makers were producing mold-made lamps with features similar to those of Hellenistic Egypt and Asia Minor. The Early Roman lamps had the same round, enclosed body and side lug as Hellenistic lamps, but with the addition of a handle. They also typically had a clay slip.

Another style of Roman lamp produced in the first century BC has been attributed to Malta, an island off the coast of Italy. Maltese lamps were wheel-thrown and are distinguished by a sunken discus with multiple air holes and a pointed nozzle.

During the Imperial Period, lamp makers throughout the Roman Empire were producing several different styles of lamps. One such style was the Birds’ Heads lamp. This lamp style had an enclosed body and a vertical handle. It gets its name from the two birds’ heads that appear as a decorative element between the nozzle and the discus of the lamp, although this area was sometimes decorated with schematic lines, instead, sometimes called a “candle-stick” motif. Birds’ Heads lamps were popular from 100 BC to AD 100.

A lamp style known as Howland 50c was common in the Eastern Mediterranean from 50 BC to AD 50. Howland 50c lamps were similar to Hellenistic lamps, with round enclosed bodies and elongated nozzles, plus the addition of a handle.

One of the most prolific lamp styles of Imperial Rome was the Factory lamp which originated in Northern Italy near the end of the first century AD. Factory lamps were mold-made and uniform in shape with a sunken discus surrounded by a rim and a channel between the nozzle and the body. Some had handles, though most did not. They were produced on a massive scale and exported all over the Roman Empire, thus earning the designation of Factory lamp.

Another type of mold-made lamp that was mass produced in the Imperial Period was the Discus lamp. Like Factory lamps, Discus lamps emerged in Italy around the end of the first century BC. The most distinctive features of a discus lamp are its large, concave discus and its voluted nozzle. These lamps appear both decorated and undecorated. Decorative content includes a wide range of topics, from geometric motifs to mythical scenes. The prevalence of this lamp type is evident by the number of examples found in MPM’s collection.

The MPM collection includes a number of non-type specific lamps and lamp fragments that can be attributed to the Roman Empire and date to the Imperial Period.

Several styles of Imperial Roman Period lamps in the MPM collection have been attributed to Egypt and North Africa. Two of these lamps are examples of a style known as Plastic. They are not made of plastic, but instead get their name from their decoratively molded shapes. Plastic lamps were primarily produced between the first and third centuries AD and were typically molded into the shapes of heads, animals, and boats, much like the two examples in the MPM collection.

Faience is the term used for glazed earthenware that was common throughout the Mediterranean and especially Ancient Egypt. It was usually used for beads and jewelry as well as small pottery objects. The MPM collection contains a single example of a Faience Glazed style lamp which, based on its decorative attributes, was produced during the Roman Imperial Period.

Egyptian Frog lamps originated in Egypt during the third and fourth centuries AD. They get their name from the frog decoration that often appears in relief on the upper portion of the lamp.

In the fourth or fifth century AD factories in Northern Africa, specifically the Carthage region, began to produce molded lamps that were stylized by a red slip and thus called North African Red-Slip lamps. They had large, closed bodies, elongated nozzles, and solid vertical handles. The large discus area of these lamps allowed for a multitude of decorative motifs.

The MPM oil lamp collection contains one additional North African lamp that does not fit into any of the previous categories. The presence of a cross on the channel of the lamp suggests that it was produced during the Byzantine Period.

Near the end of the Roman Period, a new style of mold-made lamps came into production in and around Samaria. These Samaritan lamps had vertical handles and, instead of a discus, a pronounced shoulder with decorative motifs. They have been further subdivided into Early Period (second to fifth centuries AD) and Late Period (sixth to seventh centuries AD) types. Early Samaritan lamps were characterized by a small, round body and short, wide nozzle which was concave and often decorated with a ladder motif. The shoulder decorations varied widely, from religious motifs to representations of everyday items. Late Samaritan lamps were teardrop shaped with larger fill holes and geometric or plant designs on the shoulder. They also lacked a nozzle termination. Both types are represented in the MPM collection.

Beit Natif is a site located in southern Judea where a workshop dating to the fourth and fifth centuries AD has been excavated. The lamps found at the site were mold-made and similar in design to Samaritan lamps in that they had a round body, concave nozzle, large fill hole, and decorated shoulder, generally with geometric or floral motifs. In some cases, Beit Natif lamps were produced with a red slip. MPM has three examples of the Beit Natif lamp style.

Nabatean lamps were produced during the first and second centuries AD in and around Jordan. They were mold-made and had thick sides and a short, voluted nozzle. There are several different types of Nabatean lamps; however, only one of those types is represented in the MPM collection. 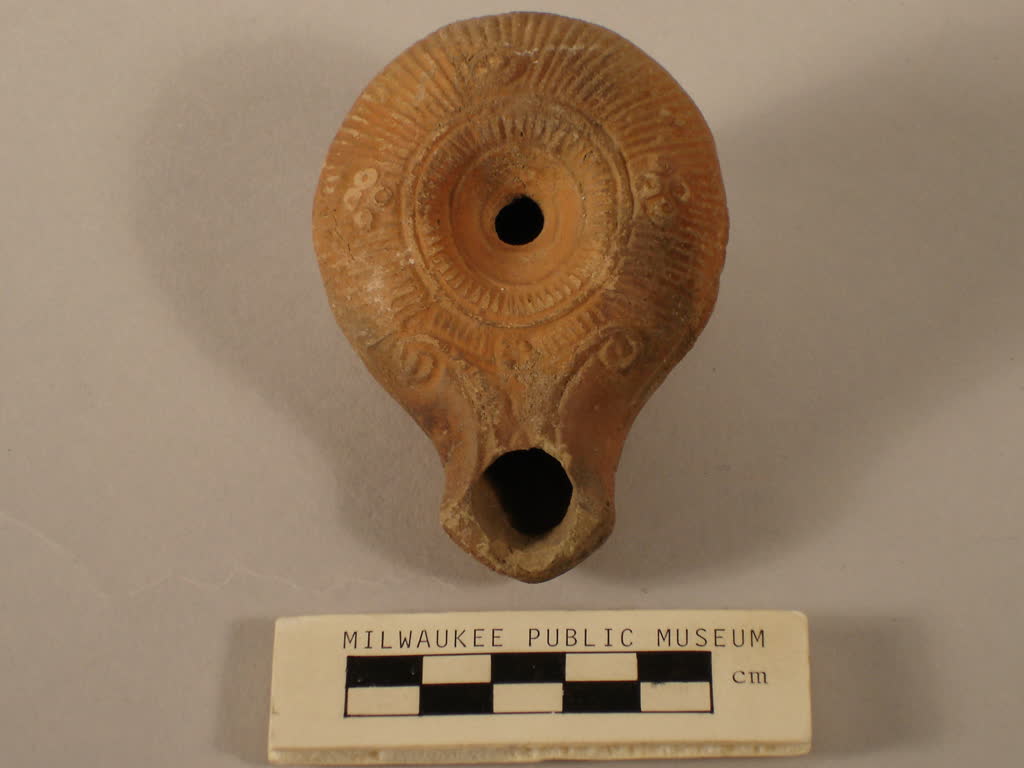 The appearance of Herodian lamps coincided with the reign of “Herod the Great,” thus earning their name. These wheel-thrown lamps had a round body and a large fill hole. The nozzle had a spatulate, or splayed shape with concave sides and was made separately before being attached to the body. The seam where the nozzle met the body was then smoothed with a knife. Herodian lamps were most commonly used in Judea between 25 BC and AD 150.

Not all of MPM’s oil lamps from the Levant fit into a specific category. There are eleven such lamps in the MPM collection. These lamps all have attributes that are indicative of their Levantine origin.

Byzantine Slipper lamps became popular in the Judean and Samaritan regions during the fourth and fifth centuries AD, near the end of the Roman Empire. Their name comes from their shape which resembles a slipper or teardrop. They were mold-made, lacked handles, and usually had a large fill hole surrounded by one or two ridges. The most common decorative motifs found on Slipper lamps are crosses, palm branches, candlesticks, and radial patterns. The three slipper lamps in MPM’s oil lamp collection are excellent examples of this lamp type.

Although most lamps of the late Roman and Byzantine Periods were mold-made, some were wheel-thrown. There were two variations of Byzantine wheel-thrown lamps, only one of which is present in the MPM collection. This variation had a ridged, cone-shaped body that tapered upwards. The other variation had a smooth bulbous body and a flared rim. Both varieties had a looped handle and projecting nozzle. Byzantine wheel-thrown lamps have been attributed to the Samaritan region and date to the third and fourth centuries AD. 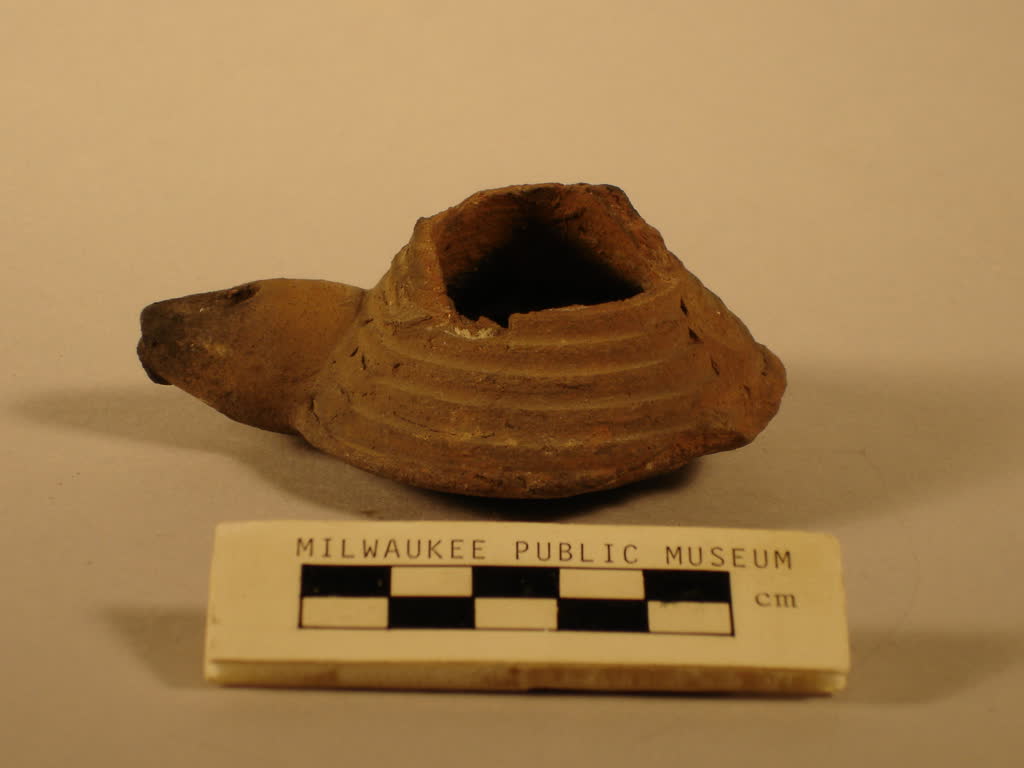 There are five unusual Roman clay lamp in the MPM collection that cannot be attribute to a particular type.

Unlike clay lamps, metal lamps produced in the ancient Mediterranean have not been divided into types. They were popular during the Hellenistic, Roman, and Byzantine Periods and are generally divided into these categories. The decorative elements of metal lamps vary greatly, especially in their lids, handles, and discus areas.

The use of stone lamps in the Mediterranean dates back as far as the Upper Paleolithic. While stone continued to be used, it became less popular with the advent of ceramic technology. The single example of a Mediterranean stone lamp in the MPM collection is believed to have had a different purpose before becoming a lamp. When objects broke they were often reworked into something new. In this case, the lamp was probably used as a censer to burn incense before it broke and was later transformed into a lamp.