Ancient burial mounds of the Hopewell culture were excavated on the Knight family farm in western Illinois. These mounds, dated to AD 150-400, contained human remains and six naturalistic ceramic figurines. These rare figures include four female individuals, two of which hold infants, one male, and one that cannot be accurately identified. It is believed that all were likely made by a single artisan. The figurines are intricately decorated and painted, revealing important details about Hopewell dress and adornment. Some scholars believe that these figurines may symbolize the importance of human and agricultural fertility, but they may also be portraits of deceased individuals. 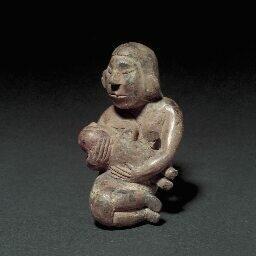