“In the year 1456...a Comet was seen passing retrograde between the Earth and the sun...
Hence I dare venture to foretell, that it will return again in the year 1758.”
- Edmond Halley 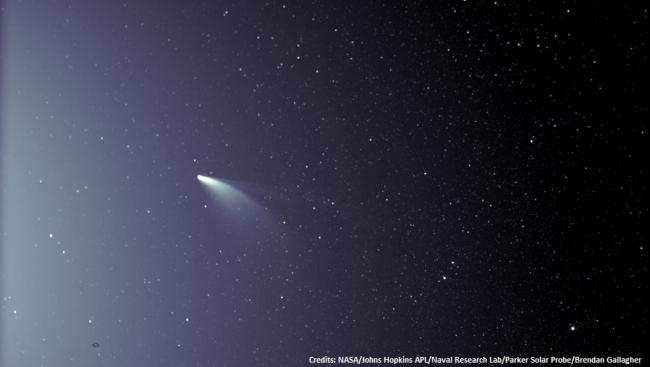 A few weeks ago, my 11-year-old grandson called me and proudly noted Comet NEOWISE was moving 42 miles per second through space. He added accordingly that we couldn’t see that motion because the comet is so far away—around 70 million miles. I replied somewhat honestly, “Really? I didn’t know that. Cool!” I was on vacation and too busy trying to photograph the comet to know many details on what I was looking at.

We kept comet-rambling for a while, both of us inquisitive. So I thought it’d be fun to share other fun facts of the brightest comet in 23 years!

Here are my top-10 ramblings about the big dirty iceberg in the sky: 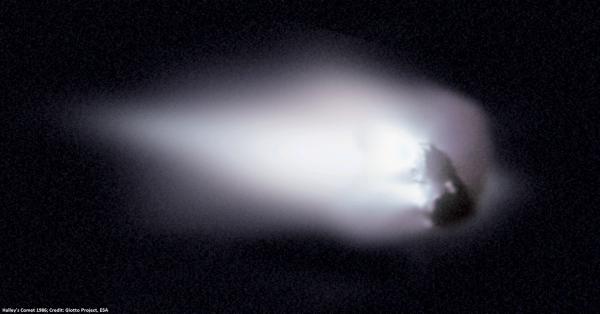 10. Comets are often described as “dirty snowballs.” But snowballs are puny—a few inches across. Comet NEOWISE’s solid nucleus is three miles in diameter. The famous Comet Halley (due back in 2061) is around seven miles across. These are not huge sizes, but they are much bigger than a snowball! So I like to call comets dirty icebergs. Comets are usually equal parts dirt and ice. By the way, Pluto’s composition is similar to a comet!

9. Comets are gargantuan if you include their coma and tails. The coma is a comet’s atmosphere. It’s a cloudy mix of gases from ices—such as water, carbon monoxide, and carbon dioxide—that have been sublimated, or turned straight from a solid to a gas. The coma of Comet NEOWISE is estimated to be the size of Uranus or Neptune, AKA 30,000 miles across. 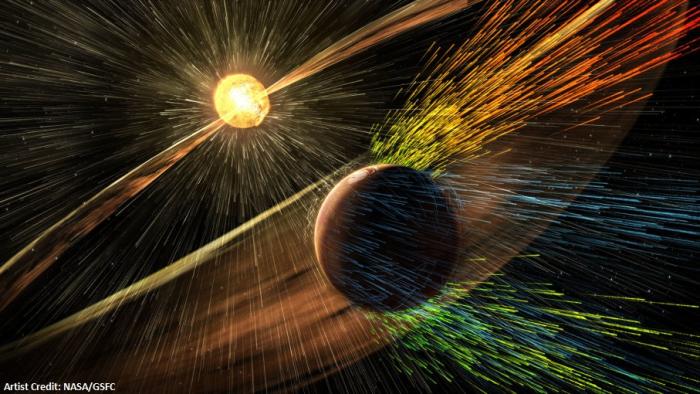 8. A comet’s tail results from the solar wind. This incessant bombardment of invisible, subatomic particles vaporizes the comet’s frozen gases and releases the dust within. This is why a comet grows two tails; the gas tail streams directly behind the comet while the dust tail is denser so it lags behind. The tails stretch millions of miles across the inner solar system. Bursts in the solar wind from solar storms can disrupt communications on Earth and cause the beautiful aurora borealis. 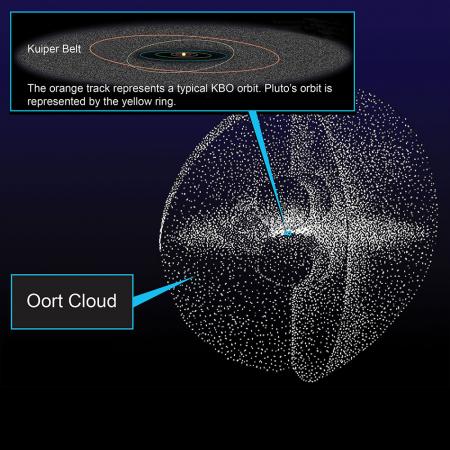 7. A trillion comets are thought to comprise the Oort Cloud. Named after Dutch astronomer Jan Oort who predicted it, Comet NEOWISE originated here. It’s located at the outer edge of the solar system, almost a quarter of the way to the nearest star.

6. Comet NEOWISE orbits the sun every 6,800 to 7,000 years. Its closest approach to the sun was on July 3 and is now racing back toward the outer solar system, but at a slower speed as it climbs out of the deepest part of the sun’s gravity well. Its orbit is highly elliptical, or oval-shaped.

5. This comet is a very old comet, though it was just discovered on March 27, 2020, only four months ago. Comet NEOWISE was born, along with most comets, as frozen leftovers from the formation of the solar system roughly 4.6 billion years ago. 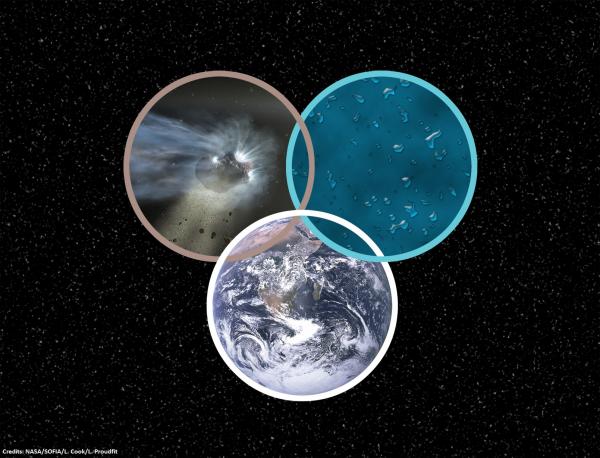 4. Ocean water on Earth may have been seeded by comets. Data collected from NASA’s SOFIA (Stratospheric Observatory for Infrared Astronomy) airplane telescope studied Comet Wirtanen back in 2018 and discovered it contains “ocean-like” water. 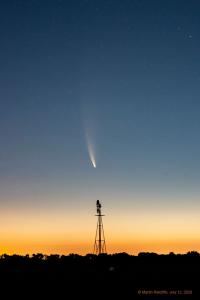 3. Comet Hale-Bopp was that last bright comet 23 years ago. Back in 1997, anyone who went looking for it, saw it. You can’t say that about Comet NEOWISE; it lacked Hale-Bopp’s awesomeness. Still, it was amazing, though difficult, to spot observe when it was at its brightest! 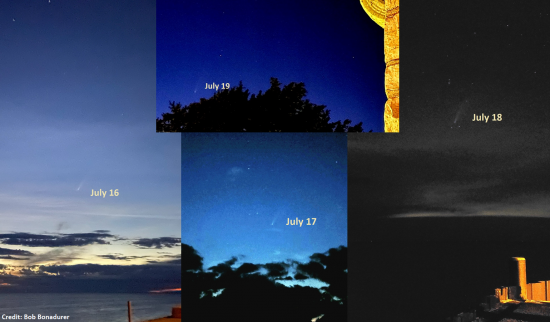 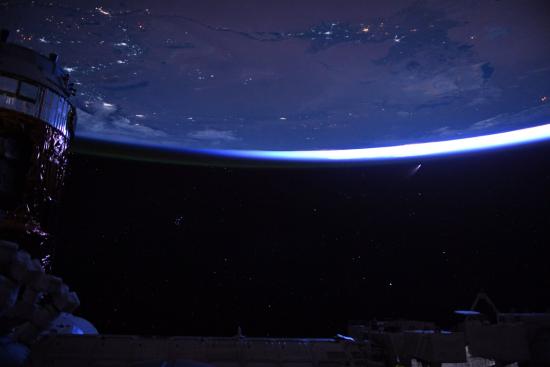 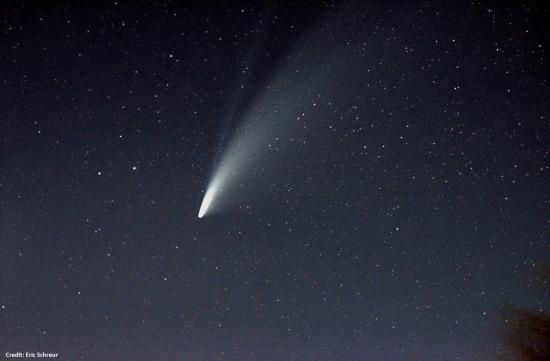 2. Comet NEOWISE has to be the most-photographed comet, so far. With good cameras on our smartphones and the advanced capabilities of amateur and professional photographers, Comet NEOWISE’s photo gallery is an endless treasure trove of cosmic delight. The shot from the International Space Station is one of my favorites.

1. Bright comets are rare. When will the next one arrive? History tells us they come along once every 10 to 20 years, depending on how you categorize their brightness and easiness to spot. It could be a while. Paradoxically, there are always accessible comets in the night sky, but they are faint and you have to be a skilled and dedicated observer with good binoculars or a telescope!

Comets, asteroids, and meteors are all extremely plentiful in our solar system. There are trillions of icy rocks or comets. Over a million asteroids exist—mostly between Mars and Jupiter, and there are countless tiny dust grains—or meteoroids—floating around. When these little specks encounter the Earth’s air, we call them meteors, or “shooting stars.”

Yet, if you gathered up all this scattered debris and placed it on a giant weight scale, it would only comprise a meager .001% of the solar system. Stacking all eight planets up on the scale, you’d get a paltry 0.14% of solar system’s mass! 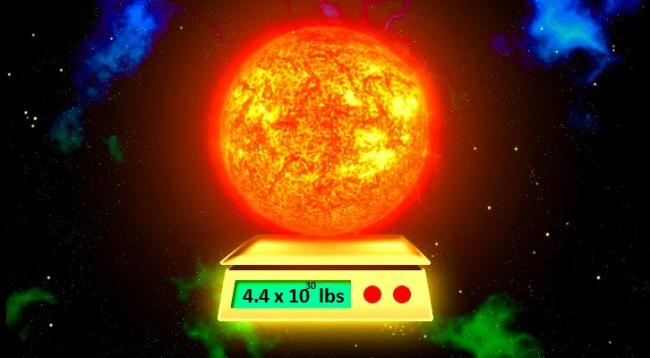 Where is it all the mass? The sun! Our star is 99.86% of the solar system by weight. On a scale, that would be 4.4 nonillion pounds! Don’t let the small percentages mislead you, though. Comet Halley still weighs over a hundred trillion pounds! 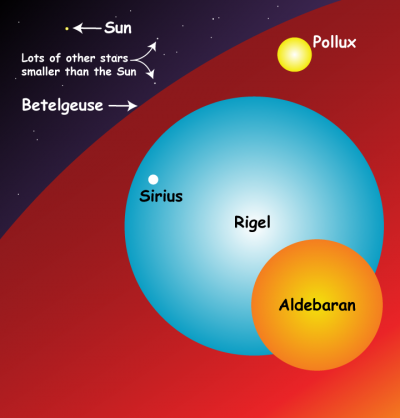 Sure, our sun is incredibly massive, but remember it’s lightweight compared to some other stars. Look for the constellation of Orion and its massive stars Rigel and Betelgeuse in the August morning sky. 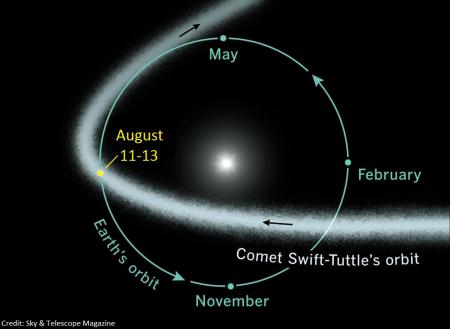 The best times to watch the Perseids this year will be the mornings of August 11-13, though there is increased activity of meteors a few weeks before and after these dates.

The Perseids dart across the night sky when Earth runs into tiny debris left behind by Comet Swift-Tuttle. This dirty iceberg is rather large at 17 miles wide. Its solar orbit is once every 133 years. The last time it neared the Sun and Earth was 1992.

A last-quarter Moon rises at 1:41 p.m. CDT on August 11 and an hour later the following two mornings. The extra moonlight will interfere and wash out the fainter meteors.

To see the best meteor shower possible, we recommend: 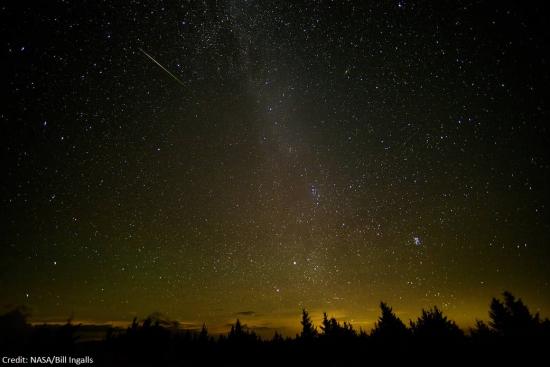 If you’re under dark-enough skies, you should witness a “falling star” every two to three minutes on average. The celestial streaks will be seen all over the sky. However, if you trace back their starting point, they originate from the constellation Perseus, located high in the northeast in the early-morning sky. 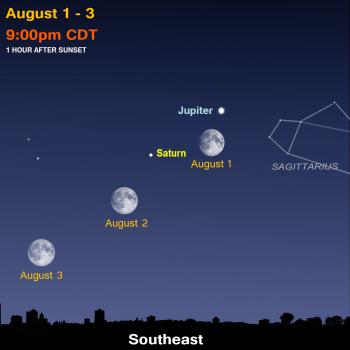 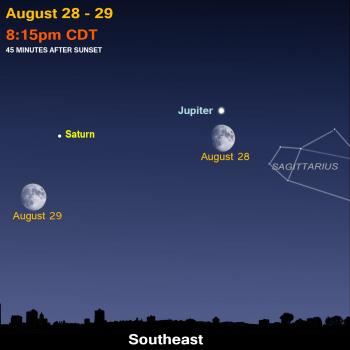 August starts with a great conjunction of the Moon, Jupiter, and Saturn. Watch the Moon slide by again from August 28-29. 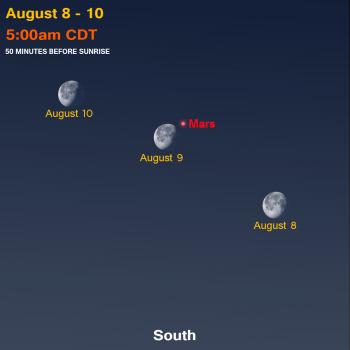 Mars rises just after 11:00 p.m. CDT at the start of August and by 9:00 p.m. at the end. Hopefully, the rover Perseverance will be on its way to the red planet arriving in February 2021. See if you can notice the fourth rock from the sun getting brighter as it nears the Earth this October. The Moon passes Mars on the mornings August 8-10. 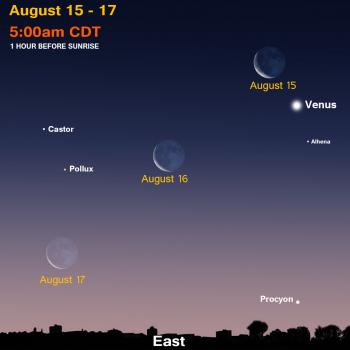 Venus is still blazing bright, high in the east before sunrise. The hot planet has left Taurus the Bull and moves in front of the stars of Gemini. The Moon joins Venus from August 15-16.