We’re exploring the space where science and culture intersect, and we’re doing it over drinks.

Grab a brew (or root-brew!) and meet us online OR onsite. This Carpenter lecture series features some of the best minds in science. From the sensation of being hugged by an octopus to quantum mechanics, Science on Tap looks to answer questions you never knew you had! 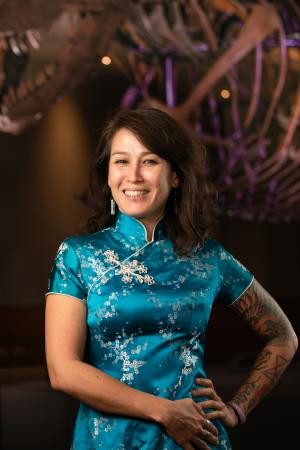 The idea that birds are living dinosaurs dates back to the mid-late 19th century, yet was not widely accepted until the discovery of feathered dinosaurs in China in the late 1990s. Attempts to understand which group of dinosaurs is most-closely related to birds is hindered by the distribution of bird-like features in dinosaur clades. New evidence suggests that many of these avian features are better considered aerodynamic features, and the difficulty in understanding which group of dinosaur birds evolved from is due to the fact that multiple groups of dinosaurs – not just birds – evolved flight.

About the Speaker
Jingmai O’Connor is currently the Associate Curator of Fossil Reptiles at the Field Museum of Natural History in Chicago. O’Connor was introduced to paleontology by Dr. Donald Prothero while at Occidental College (class of ’04) and did her PhD studying Mesozoic birds at the University of Southern California (2009) with Drs. David Bottjer and Luis Chiappe (Los Angeles Natural History Museum). Her research explores the evolution of flight in the Dinosauria, the dinosaur-bird transition, and the biology of stem-avians, not through any one aspect but exploring Paraves through feather origin and other topics as exceptional specimens arise. She has published more than 120 papers, some of which have appeared in top journals. In 2019, O’Connor was awarded the Paleontological Society’s Schuchert Award for excellence and promise in a paleontologist under 40.