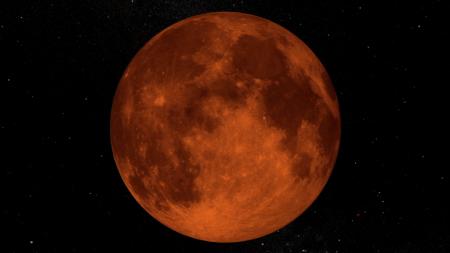 All eclipses are spectacular, but the total-lunar variety is slowly mesmerizing and subtle.

The Moon’s gradual disappearing act takes place on the night of January 20-21 -- cross your fingers for clear skies. The whole cosmic process takes over three hours! The Moon vanishes at a leisurely pace because of our great distance from it; however, the Moon is actually speeding quickly at 0.63 miles per second.

During the partial phase starting at 9:33 p.m. CST, the Moon will grow dark starting from its lower left position. The Earth’s shadow will creep up and to the right, slowly engulfing our night light. About 10 to 20 minutes before totality at 10:41 p.m., you will notice the Moon turn a slight orange-reddish color.

For the 62 minutes of the total lunar eclipse, take time to observe the changing colors. The darker red will be on the lower part of the Moon as it is deeper in the Earth’s shadow. Lately, people have been calling this part the Blood Moon. The red color is caused by the Sun’s light being refracted and dispersed by the Earth’s atmosphere. Only the longer energy wavelengths of red reach the lunar surface. 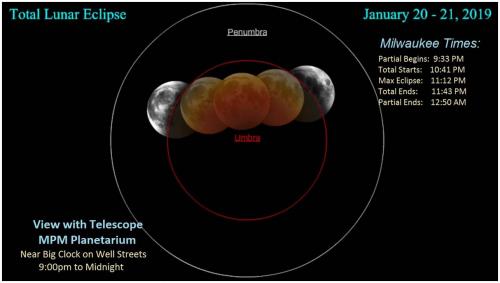 As the total phase nears its end, watch the Moon grow brighter toward its upper right. At 11:43 p.m., the Sun’s light once again reveals the familiar white-gray glow of the Moon. You can still notice some orange and red light from the partially eclipsed Moon for another 10-20 minutes.

Bundle up and visit us at the Museum in downtown Milwaukee -- we will have telescopes set up to view the heavenly show. Clear skies only!

The last time we saw all of the total lunar eclipse in Wisconsin was over three years ago on September 27, 2015. The next complete cosmic conceal for the Moon is May 16, 2022.

On the Far Side of Pluto 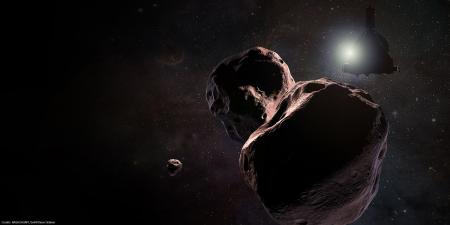 In July 2015, NASA’s New Horizons thrilled the curious with the first close-up pictures of distant Pluto. It took the speedy spacecraft almost 10 years to rendezvous with our favorite former planet. After another three-and-a-half years, it will encounter another cold world a billion miles beyond Pluto: On January 1, 2019 New Horizon will meet Ultima Thale.

Ultima Thule is a tiny, icy orb 4 billion miles from the Sun and only 25 miles across. No wonder it remained out of sight until 2014! The Hubble Space Telescope tracked it down by intentionally looking for Kuiper Belt worlds so New Horizons would have something to visit after Pluto. (The Kuiper Belt is like an icy rock asteroid beyond Pluto.)

Ultima Thale is a nickname, stemming from ancient Greek lore. It is the furthermost-north place beyond the known world. Its official name is 2014 MU69.  It will receive an official name based on the new pictures that will be taken by New Horizons as it zooms on by. The closest snapshot will be from only 2,200 miles away. 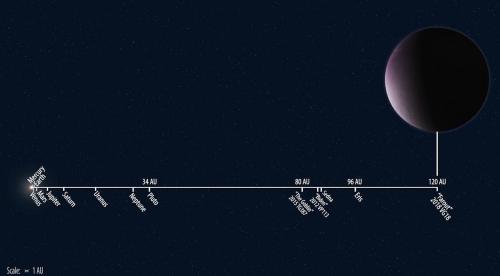 It would be logical to call every space discovery “far out,” but the newest one just announced two weeks ago seems to work.

Astronomers have uncovered an object (“Farout”) in our Solar System that’s farther than anything previously discovered. Farout is a temporary nickname by the scientists; officially, its moniker is 2018 VG18. Rough estimates put its size at 310 miles in diameter—which is big enough to pull itself into a somewhat spherical shape. By analyzing the dim light, scientists believe it glows with a pink hue color. The picture seen here is an artist’s rendering. 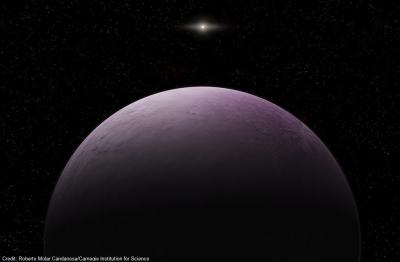 The newly uncovered world is 120 Astronomical Units (AU) away, or 11.2 billion miles, three-and-a-half times more distant than Pluto! One AU equals 93 million miles, the distance from the Earth to the Sun. Pluto is only 34 AU away, on average. Think of Farout’s great distance this way: Say we had a leftover probe ready to go and launched it tomorrow -- it would take about 40 years to get there! (And Farout is within our Solar System!)

January 3: Earth at perihelion, closest point to the Sun

May 4: 30th Anniversary - Start of five-year Magellan mission to Venus

June 9:  Jupiter’s opposite the Sun, up all night

July 4:    Earth at aphelion, the farthest point from the Sun

July 8:   Saturn opposite the Sun, up all night

September 23:  Fall arrives with the autumnal equinox at 2:50 a.m. CDT 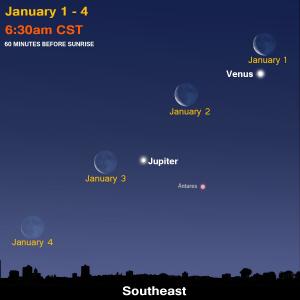 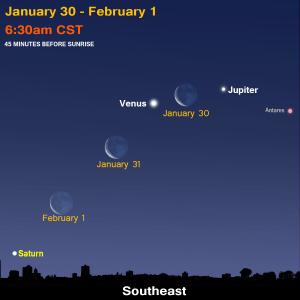 Jupiter, Venus, and the Moon put on two great shows this January! Look southeast each clear morning and enjoy the views. See them all together on the first mornings of the new year, January 1-4. Then watch the three brightest night lights repeat this dazzling show January 30 to February 1, but with Venus and Jupiter in reversed positions. 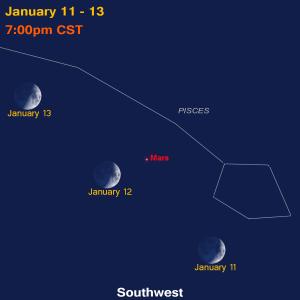 Mars is now all alone in the evening sky. You can see it easily among the dim stars in the constellation Pisces. As the red planet moves even farther from the Earth, it will dim even more in the sky. If your mind’s eye recorded its red brilliance back in July, it is quite a drop-off in brightness. The Moon swings by from January 11-13. 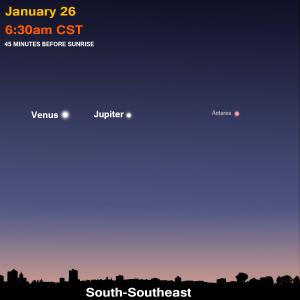 Watch each January morning as the two brightest planets slowly pass each other. They never get super close but they will captivate your celestial eyes.  Their closest approach will be the morning of January 22. The two planets form a straight line with the red star Antares on January 26.

Saturn  is in conjunction with (behind) the Sun in January as Earth passes it on the Solar System racetrack. By month’s end, the ring jewel becomes barely visible, rising at 5:43 a.m. CST, over one hour before the Sun comes up at 7:08 a.m. CST.

Mercury  is out of sight all night.