“Black holes are the seductive dragons of the universe, outwardly quiescent yet violent at the heart, uncanny, hostile, primeval, emitting a negative radiance that draws all toward them, gobbling up all who come too close…”
- Robert Coover, American Novelist 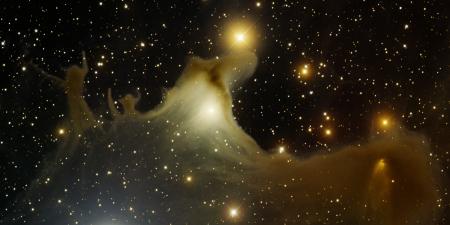 This picture features the ghost nebula. If you look closely to the left, you can spot a couple of ghosts dancing for joy. See them? Then you’ve just experienced pareidolia — a human brain-game where we conjure up familiar images where none actually exist. The ghost nebula is a vast space cloud comprised mainly of hydrogen. It’s located 1,500 light years away in the constellation Cepheus the king. The nebula is over two light years wide. 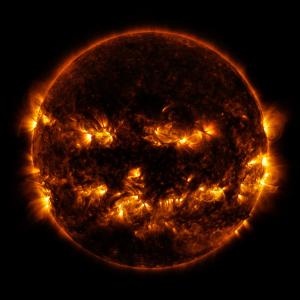 The “pumpkin sun” is another great example of some Halloween fun. It was taken by NASA’s Solar Dynamic Observatory in space.  The bright “facial features” are markers of intense magnetic fields in the Sun’s outer atmosphere, or corona. Corona is basically plasma, the fourth state of matter. It’s so hot that electrons can’t stay attached to the atomic nucleus. The corona extends millions of miles into space and is millions of degrees hot. The Sun’s corona is hotter than the solar surface, which is about 10,000 degrees Fahrenheit.

What’s Halloween without a witch? Can you spot the witch’s face in this distant cloud of gas and dust? The witch head nebula is a long-ago supernova relic illuminated by the supergiant star Rigel in Orion. The witch head is next door in the constellation Eridanus the river. Its distance from Earth is almost 1,000 light years.

Someone dressed as a vampire for Halloween can be a bit scary. The cosmic counterpart for the dreaded Dracula is the ultimate sucking monster—the black hole! Gravity is so severe here that nothing can escape if it wanders past the event horizon. Not even light—the fastest thing in the universe—can survive its voracious pull.

What would happen if a curious astronaut drifted too close to the sucking pull of a black hole? Spaghettification! The immense gravity would yank on whatever body part is closer more than what is farther away and stretch the poor space person like a piece of spaghetti. Death by black hole! 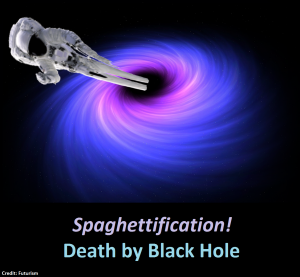 The last cosmic Halloween connection is the date, October 31. This is known as a "cross-quarter" to the Celts of the British Isles. Halloween is approximately halfway between the fall equinox and the winter solstice. Long ago, the Celts used cross-quarter days to mark the beginnings of seasons. Halloween marks the end of the harvest and the start of the dark time of the year — winter. They called it “Samhain” and celebrated it with a festival complete with bonfires.

With all these cosmic connections to Halloween, our Planetarium just had to create a new show! Come see Spooky Space, premiering on the big dome screen on October 13. 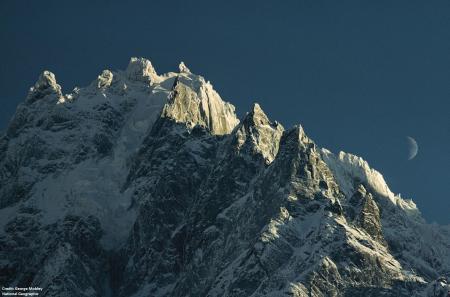 We all make shadows. The Earth casts a pretty big shadow -- we call it nighttime!

It’s fun to watch our planet’s shadow slowly descend at sunset. We witness the tops of mountains, trees, or buildings catching the last rays of the Sun before we are engulfed into night’s darkness. Objects that are really high up, like satellites, are best seen reflecting sunlight within an hour or two after sunset or before sunrise.

Shadows are always opposite the light source. To spot Earth’s shadow, look to the east after sunset or west before sunrise. It takes on a darker blue color than the brighter blue of the sky’s twilight. Sometimes, you will see an arc of pink light separating the two blues. This is called the “Belt of Venus.” This soft glow stretching across the twilight sky is an atmospheric marvel caused by sunlight being refracted by the fine particulates in the air. 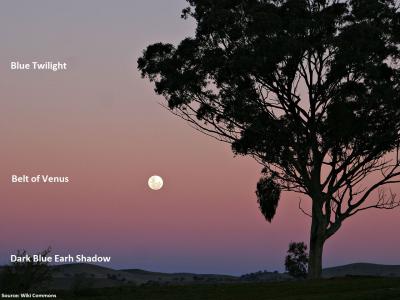 The Belt of Venus name comes from the fact that Venus is always between us and the Sun. This means we can only see the brightest planet in the general direction on the sunset or sunrise. In other words, we never see it opposite the Sun, where the Belt of Venus is located.

This backscattering of the Sun’s light is similar to the red light cast onto the Moon during a total lunar eclipse. At almost 8,000 miles in diameter, the Earth throws a pretty big dark shadow called the umbra. It extends 870,000 miles into space. Since the Earth is round, the shadow is cone-shaped. Think of it as a red ice cream cone with the big blueberry Earth on top. The penumbra is a partial shadow and does not block the Sun’s light completely. This lighter shadow barely dims the Moon and is difficult to notice for the casual observer. 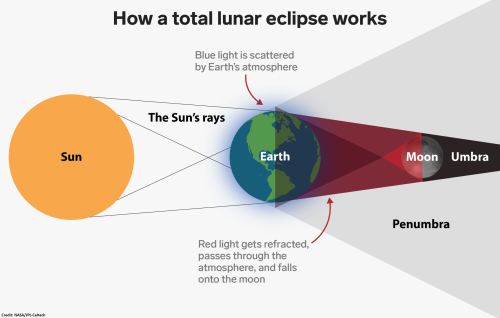 The lunar eclipse occurs when the Moon passes through the Earth’s shadow, but only when Sun, Earth, and Moon align in space. The Moon turns “blood” red because a tiny amount of sunlight gets refracted (bent) by our atmosphere. Recall the prism and how white light can be broken up into its spectral colors. These colors represent different energy levels and wavelengths of the Sun’s light. Only the longer wavelengths of red reach the Moon; the other colors scatter out at shorter distances. 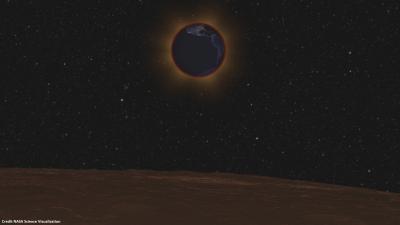 Our lunar eclipse is the Moon’s solar eclipse. Imagine you are an astronaut on the Moon. You would be bathed in this red shadow from the Earth! Looking up in the lunar sky, you would see a red halo surrounding the Earth and Sun’s wispy corona.

Mark your calendars for the next lunar eclipse coming to a sky near you on January 20-21, 2019. If clear, we will have telescopes set up here at the Planetarium to see the eclipsed Moon up close. 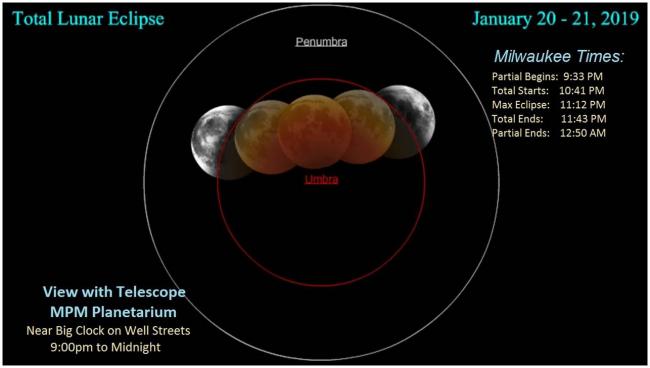 “This Month’s Moon” is a short new feature for the Starry Messenger. After all, our word “month” comes from the Moon. They use to be called moonths, because it takes a month for the Moon to orbit the Earth. 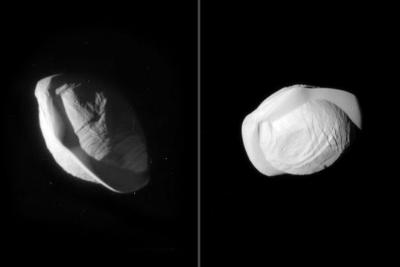 With over 300 moons in the Solar System, it will take awhile before we peruse the entire list. By that time astronomers will surely discover the first exomoon—a moon orbiting an exoplanet. And the journey continues…

You have to love the shape of this little moon Pan. It looks like a flying saucer.  It is the closest moon to Saturn with a name. Being so near to the big gas world, it has to orbit quickly—once every 14 hours. The icy rock is as wide as Milwaukee at about 20 miles, but it would be 14 miles high! The US Bank building at 41 stories is only 0.11 miles up. The name comes from Pan, the Greek god of the shepherds. Pan acts like a shepherd; it uses gravity to create a gap in the ring system of Saturn. 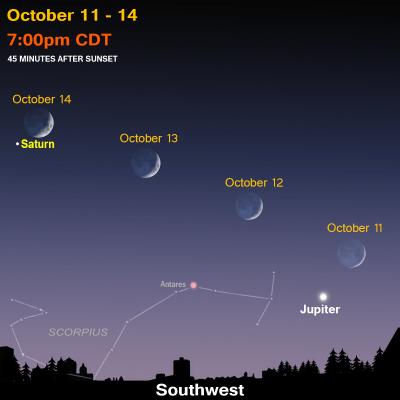 Jupiter hangs on all October, dominating the southwest sky after sunset.  It sets quickly, though—about 90 minutes after sunset. The king planet will leave our evening sky about mid-November. Catch the Moon passing by on October 11-12. 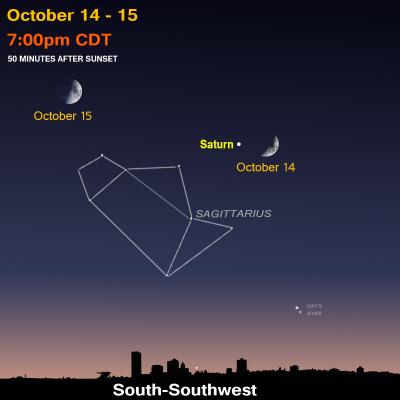 Saturn is higher and easier to see in the southwest, but it’s not nearly as bright as its bigger cousin Jupiter. Saturn is fast leaving our evening sky, too. It will slowly start disappearing in mid-December. The Moon can be seen near the ring world on October 14-15. 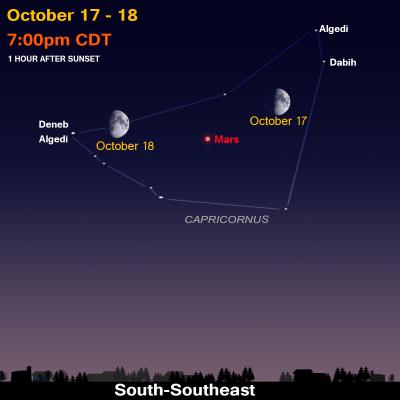 Mars keeps fading but still shines brighter than any star in the evening sky. Spot the red-orange rock-world in the south sky after sunset. The Moon moves over to join Mars on October 17-18.

Venus orbits between the Earth and Sun (inferior conjunction) on October 26. If you are very dedicated and have an unobstructed view to the southwest sky, you may catch the hot planet barely above the horizon right after sunset.

Mercury is too difficult to spot this month. 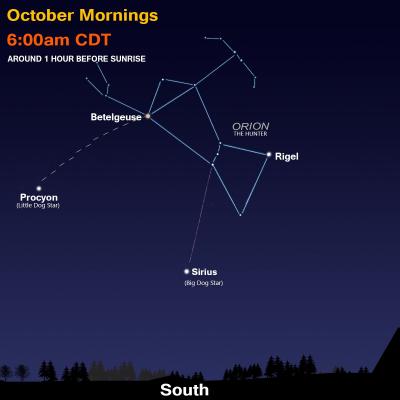 Brilliant Orion can be observed in the south sky any clear October morning. Follow the belt straight down to the night’s brightest star Sirius, the big dog star. Follow Orion’s shoulder stars to Procyon, the little dog star. 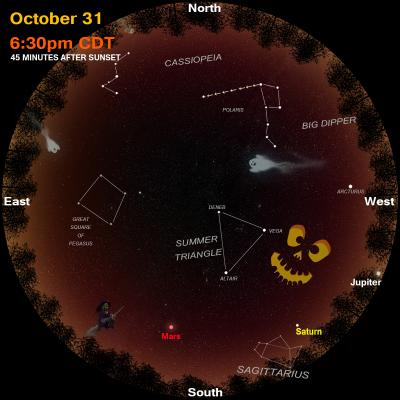 Look up on Halloween night -- you never know what you might see!

Visit  the Planetarium to see one of our two Halloween shows. For families, we have Spooky Space. For adults looking for a macabre--yet educational—experience, check out our Death of the Universe show.