"A good friend of mine / Follows the stars,
Venus and Mars are alright tonight”
~ Paul McCartney, British Singer 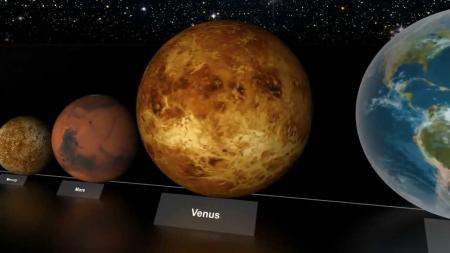 Mars is smaller than Venus; on average, it’s twice as far from Earth. Yet, Mars is the place to go. It definitely rules over Venus when it comes to robot visits. Currently, there are 8 active spaceships exploring the rocks and atmosphere on the red planet. Another one will arrive in late November — the INSIGHT Lander.

NASA has no active probes at Venus right now. They haven’t had one since the Magellan orbiter, which probed this hot blistering world from 1990 to 1994.  Since then, Europe put the Venus Express into orbit for eight years starting in 2006. Japan, after some early troubles, was finally able to get its Akatsuki spacecraft into orbit and uses infrared cameras to study the atmosphere of Venus. 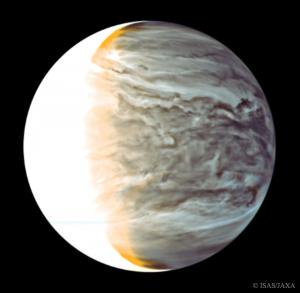 This lack of exploration of our sister planet (because Venus’s size is similar to Earth’s) is certainly a crushing blow to scientists curious about this world -- but it might be understandable.

Venus is a harsh place. Temperatures hover around 900 degrees Fahrenheit. A thick carbon dioxide atmosphere traps solar energy, like car windows parked in the sun. This roasting planet means only a few spaceships have landed on Venus. What is the record time of survival on the surface? Only 127 minutes by Venera 13, a Soviet spacecraft.  No lander has touched down on Venus since the 1980s. America has never done it. 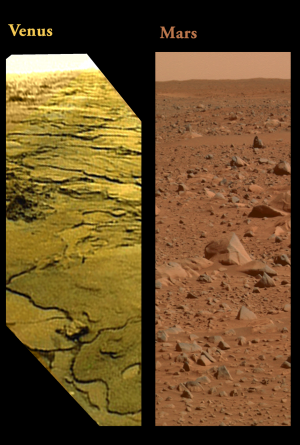 Now let’s compare the scant Venus missions to Mars. The Opportunity Rover landed in 2004 and has been going for over 14 years! However, there is a sad update to report—a recent Martian dust storm caused the rover to “fall asleep.” NASA might not be able to wake it back up. Stay tuned.

Mars has a carbon dioxide atmosphere like Venus, but it’s much thinner. The surface temperature at the equator can be 50 degrees Fahrenheit, but just five feet higher it can be 20 degrees colder. Billions of years ago, Mars had a much thicker atmosphere which made the planet warmer and wetter. Evidence for water on Mars is widespread. In late July 2018, new evidence showed the possibility of an underground lake of water beneath ice at Mars's south pole.

Where there’s water there could be life. It is an alluring possibility. Water is the key molecule because of the simple fact that all living creatures on Earth are over 50% water by weight. Does that hold true for extraterrestrial life?  One of NASA’s exploration goals is to “follow the water.”  Naturally, though, we humans have always been searching for water. It’s essential for our survival.

Does Venus have water? What are life possibilities for this hot, hellish world? 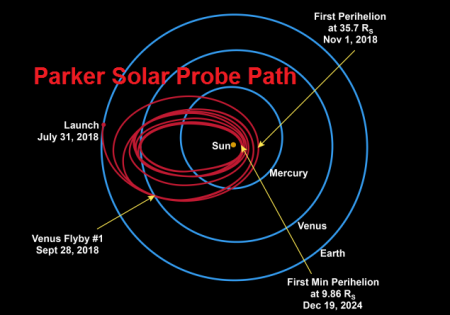 Billions of years ago, Venus may have had a watery surface like Earth and Mars, according to some scientists. However, lava flows have covered most of the planet’s surface and volcanism may still be active. So even if we could design a landing probe that lasted more than a few hours, it would have to dig deep into the ground to find any clues of possible water or life. The cost factor for this herculean endeavor sends ideas for more Venus missions to the backburner. So Mars is the big winner today! But back in the 1960s when the space program was just getting started, Venus was victorious. Almost twice as many spaceships targeted Venus than Mars in those first 10 years. The two planets were at a draw in the 1970s. Venus was back on top in the 1980s, winning by a landslide. By the mid-1990s, Mars pulled away and has been the planet champion by far.

The Venus drought will ease a little soon (sort of). NASA’s Parker Solar Probe was just launched last month. It will eventually move within 3.9 million miles of the Sun’s surface in 2024! This proximity to our star is seven times closer than any probe has flown before.  To achieve this, Parker has to slow down by using the gravity of Venus — seven times! The first swing past Venus will be later this month. Unfortunately, no images are planned from the Parker probe.

We have reached all the planets in our Solar System with our robotic emissaries. We even visited a few of the dwarf planets. Voyager 2 is now 11.7 billion miles from Earth after 40 plus years, the farthest a spacecraft has ever flown.

Our telescopes have stretched our vision back to when the universe first became detectable, roughly 380,000 years after the Big Bang. This distant “light” is called the cosmic microwave background radiation, about 13.8 light years away in all directions. 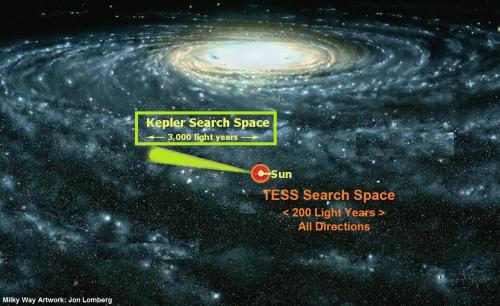 Looking at it one way, our astronomical accomplishments are vast. Looking at the rate of uncovering exoplanets, the numbers can seem a bit lackluster. We have identified over 6,000 distant worlds. That may seem like an impressive figure, especially when you consider that 25 years ago, our exoplanet count was zero. But a few thousand planets beyond the Sun is a pittance compared to the billions of planets we expect to uncover someday.

Our exoplanet progress is slow. We need to remain humble and patient. Stars are simply too bright and planets too small and feeble to detect easily. Our telescopes have to search close to home.

The drawing of our Milky Way galaxy above reveals the small area of our investigations. The Kepler telescope looked fairly far (about 3,000 light years) but only in a small swath of the sky toward the constellation Cygnus the Swan. Kepler has served us well. It has confirmed the vast majority of exoplanets. But Kepler is finally running out of observational steam after nine years of glorious discoveries. 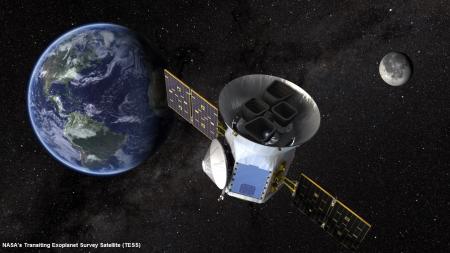 Stepping in to take over is TESS — or Transiting Exoplanet Survey Satellite — which was just launched in April 2018. TESS will look only 200 light years outward from Earth, but in every direction. In its first two years, TESS will examine the light of 200,000 stars for a slight drop in brightness. This transit method type of search is caused when a tiny planet blocks the star’s light by a tiny fraction on a regular basis. TESS will spot planets ranging from the size of Jupiter or bigger to the Earth-sized worlds.

TESS will be exciting; new worlds will be identified soon. But when the survey is all said and done, the exoplanet total will still be modest. As astronomer Carl Sagan once said, "The surface of the Earth is the shore of the cosmic ocean … We have waded a little out to sea. Enough to dampen our toes or, at most, wet our ankles. The water seems inviting." 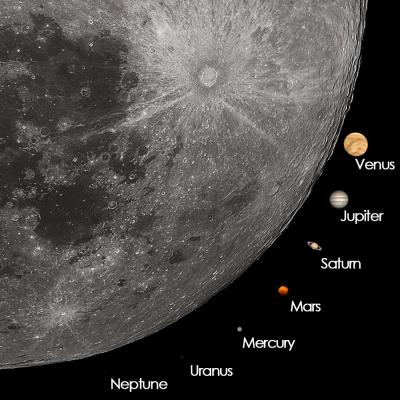 t’s back. The bizarre claim that Mars will be as big and bright as the Moon is floating around the internet. We had many inquiries here at the Planetarium.  I am never sure what to say when a Planetarium visitor seriously asks me if this will be true? I can just say, “No, of course not,” and leave it at that; but as an educator, I want to explain more, and if their eyes display curiosity, I do.

The Mars-hugeness hoax started back in 2003 when Mars was closer to the Earth than it been in 60,000 years. This means it would have been brighter than it’s been in a long time. That’s amazing and spectacular news, but it doesn’t mean Mars will enlarge to Moon-size.

With Mars being in the news and people getting excited to see the red planet, somehow, somewhere, someone started an email stating Mars would be as bright as the full Moon. Some say it was an honest mistake, misinterpreting a news story or someone’s email. To add to the hoax, people made pictures of Mars and Moon at the same size and the whole thing went “viral,” as they say. But this one has lasted 15 years! 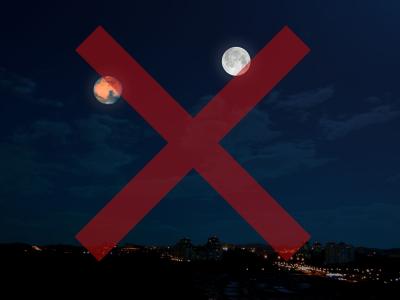 I like to think the popularity of the Mars hoax is simply a reflection of peoples’ inquisitive natures about the planets and the universe. They want to know more. So when Mars enthusiasts come to the Planetarium, we show them the striking features of the red planet—and point out its true size. 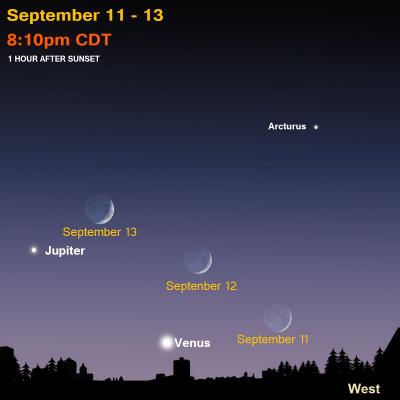 Say goodbye to Venus this month. It sinks lower each night in the western sky. Your best chance to see its brilliant light is September 11-13 as a skinny Moon slides by.  Venus will reappear in the morning sky by early November. 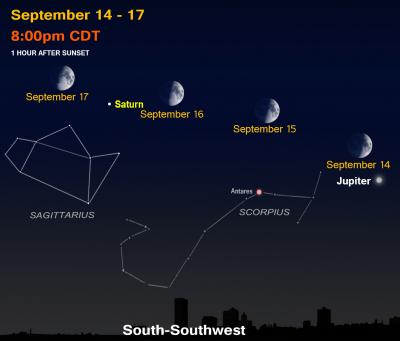 Jupiter is also sinking lower each night, but it’s much easier to locate than Venus. By early November, the king planet will be very difficult to spot low in the southwest. At month’s start, Jupiter sets around 10:00 p.m. and then by 8:00 p.m. at the end of September. 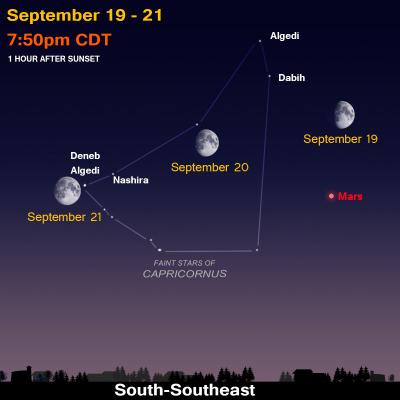 Mars is still bright, but it’s fading a bit over the month as the faster Earth pulls away from the red planet. The  Moon passes by on the nights of September 19-20.

Mercury is too difficult to see easily this month.

The autumnal equinox marks the arrival of the fall season on September 22 at 8:54 p.m. CDT. This is when the Sun is directly over the Earth’s equator and everyone experiences 12 hours of daylight and 12 hours of nighttime.

The Harvest Moon is the full Moon closest to the first day of fall. This year it will be the night of Monday, September 24.