The Ivory-billed Woodpecker (Campephilus principalis) is one of several species whose numbers have dwindled to the point where it is uncertain how many remain. The species is listed as critically endangered and possibly extinct by the International Union for Conservation of Nature (IUCN).

In 2003, sightings, sound recordings, and videotapes confirmed the presence of a male Ivory-billed Woodpecker in the Big Woods region of eastern Arkansas. The U.S. Fish and Wildlife Service, the Nature Conservancy, the Cornell Lab of Ornithology, and other state and federal agencies have established the "Big Woods Conservation Partnership" to preserve a 120 square mile area of forest for the species.

The Milwaukee Public Museum has four Ivory-Billed Woodpeckers in its Vertebrate Zoology department collections. The first one was donated to the Museum in 1888. 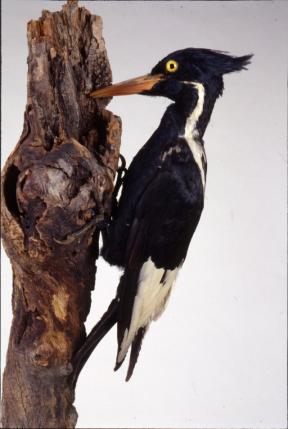 Catalog Number
N/A
17
Back to Top of Page