The Waiwai are a native Amerindian group living in southern Guyana (formerly British Guiana) and northern Brazil. There are approximately 200 Waiwai living in Guyana and 2,000 in Brazil. Of the native groups in Guyana, the Waiwai have remained the most traditional, but have still been influenced by missionaries to the region. The 33 items in this collection mainly represent everyday items such as basketry, bow/arrows, and body ornamentation. The collection was acquired in 1965 on an expedition led by Lon W. Mericle, a Museum Research Associate in Anthropology. Few museums in the United States have material produced by this tribe. 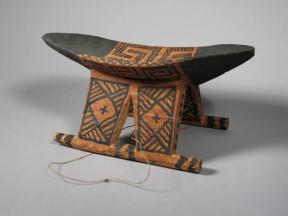