“One thing is certain and the rest debate.
Light rays, when near the Sun, do not go straight.”
-  Arthur Eddington, English Astronomer 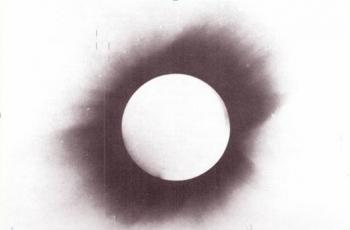 What was the most influential total solar eclipse ever? Arguably, it was 100 years ago! On May 29, 1919, the Moon eclipsed the Sun and the results caused a science revolution. Newton’s theory of gravity, while brilliant, was overthrown after 250 years.

Albert Einstein's new theory of relativity said the stars, when lined up behind the Sun, should be in a slightly new position because their light will bend as it follows the warping of spacetime by the Sun. The only time you could photograph stars behind the Sun was when the sky grew dark during a total solar eclipse. 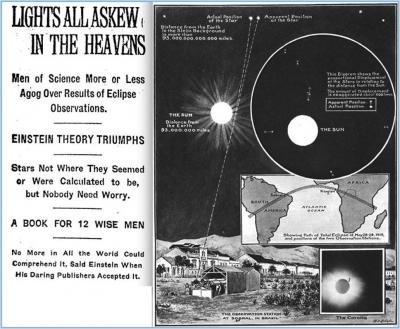 Two English scientists traveled over a thousand miles to Africa and South America to carry out this task. These scientists — Arthur Eddington and Frank Dyson — published their results almost six months later in November, and they showed the stars had shifted. Einstein was right! These eclipse results catapulted Einstein into a science celebrity practically overnight. Totality vaulted him and his theories straight to the front page.

Another result of the eclipse revealed that light has weight. Before Einstein, Isaac Newton said gravity would not have any effect on light. Einstein said that any amount of mass bends spacetime. A really massive object like the Sun will curve spacetime enough to be detectable. The 1919 eclipse proved that light is redirected by gravity. The light from distant stars did not go straight over the gravity well, but followed the curved path caused by the Sun’s mass. Light always takes the shortest path -- this time, the path happened to be curved. 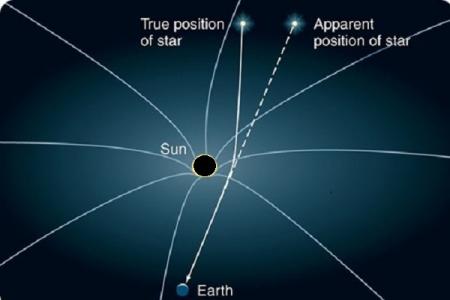 Now, you might be saying, “Light is comprised of photons and they do not have mass! So that means light has no mass. It can't weigh anything.” Correct, photons have no mass but they have energy. So, think of the world’s most famous science equation. What did you come up with? How about E=mc²? Also discovered by Einstein, this cosmic recipe says energy is equal to the mass of a body, multiplied by the speed of light squared. Einstein showed energy and mass could be the same thing. A planetarium filled with light weighs more than an empty planetarium with no light. All forms of energy have weight — radio, infrared, UV, x-rays, and gamma rays. The reason this makes no sense is that under everyday human conditions, the weight of light or energy is mind-bogglingly insignificant compared to the weights from the mass all around us. 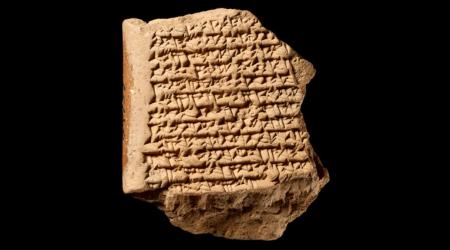 Think of a number between one and 10. A favorite of many is the number seven. Gamblers think it’s lucky. It’s popular all over the world and was also deemed a fortunate number back in time. A few examples include the seven wonders, the seven sisters (the Pleiades), the seven dwarfs, seventh heaven, and the seven days of the week.

Seven’s popularity may stem from the seven “planets” from ancient Babylonia. These long-ago sky watchers saw the seven objects move through the sky. They changed their positions against the more-distant fixed stars. Five are actually planets as we know planets today. They are Mercury, Venus, Mars, Jupiter, and Saturn. The other two were the Sun and Moon. Back then, some 3,000 years ago, all these worlds were seen as a “planet” — a Greek word for “wandering star.”

These elite orbs made the number seven significant -- and holy -- for the Babylonians. Historians surmise they needed a regular time cycle for their daily lives which was shorter than the month, which came from the Moon’s cycle through the sky. Seven must have been seen as a good number, and they could honor their gods at the same time. These special seven wanderers were seen as deities by many cultures all across the Earth.

Imagine if their sky surveillance was a little keener. The Babylonians might have noticed the planet Uranus moving in the sky. Uranus is barely visible under perfectly dark skies. But this “star” moves incredibly slowly (84 years to orbit the Sun), so no ancient observer ever realized it was a planet. If so, we might be living with an eight-day week. 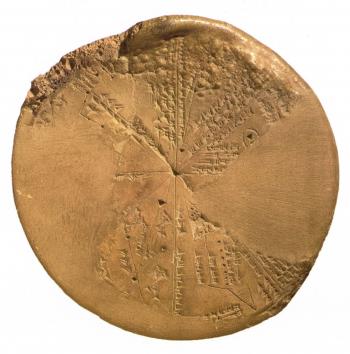 Around 2,500 years ago, the ancient Mesopotamians were a powerful, influential society. Many of their ideas spread across the land and were used by other cultures. Many adapted the seven-day week. No one knows exactly why. The Romans originally had an eight-day week. The Egyptians had a 10-day week.

Another Babylonian measuring tool, the 360-degree circle, eventually led to two units of time we live by constantly — minutes and seconds. The origin of the 360-degree circle is thought to have come from the 365 days of the year. The Babylonians also liked the number because it was easily divisible by many other numbers. Like the week, the circle was adapted by many other people long ago. It became the dominant way to measure a circle, and about 400 years ago, it gave us our 60 minutes and 60 seconds.

When the Rome Empire fell and power shifted in Europe, the Norse mythology god names ended up supplanting most of the Roman names for the seven days of the week. For example, take Mars and Tuesday: Tiw is the Norse god of war while Mars was the Roman god of war. So Tuesday is also “Mars” day. Another example is Thor and Thursday: Thor is the Norse god of strength, thunder, and lightning. His counterpart for the Romans was Jupiter, or Jueves in Spanish, a Latin language. So Thursday is “Thor-day”! 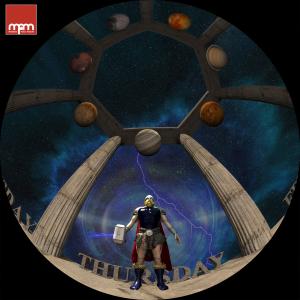 If you grow more curious about the seven wandering wonders that gave us the week — and want to want see Thor on the big dome - -come see the Planetarium’s newest production, It’s About Time! Cosmic Cycles We Live By, opening June 15. 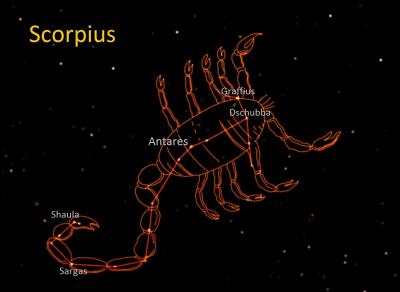 While the Sun reaches its highest point at the summer solstice to mark the official start of summer in the northern hemisphere, the night sky’s summer sign is Scorpius.

This bright constellation crawls above the southeast horizon as the Sun sets in June. The Scorpion always stays near the southern horizon as it traverses across the sky. Think of the Sun’s low path during winter. The Sun is “in” Scorpius as our cold weather takes hold in late November. If you live in America’s southern states, you would see these stars higher in the south. If you lived at the equator, they would shine very high up!

The brightest star in this stellar group is the red star Antares, the Scorpion’s heart. The name Antares is a Greek word that merges “anti” and “Ares,” meaning “rival of Mars.” Antares is often mistaken for Mars in the sky. While Mars is red because of the iron in its rocks, Antares is red because it’s cooling and expanding into a red giant star as it slowly runs out of nuclear fuel. Antares is over 600 light years away from Earth. 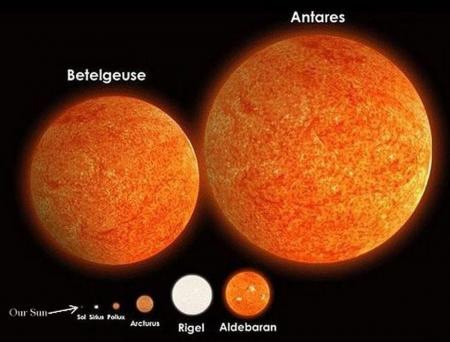 Even lower in south sky is the Scorpion’s stinger star, Shaula. It’s the second brightest star, and, like Antares, big and far away. The sky’s 24th brightest star is hot and glows a blue-white color. It is 11 times the mass of the Sun. Shaula has two companions that make it part of a triple-star system — though human eyes can’t spot the other two stars. Its distance has been hard to pin down, but recent estimates put it at 365 light years away.

The Scorpion is always being chased by Sagittarius the centaur. We’ll take a closer look at this constellation next month. 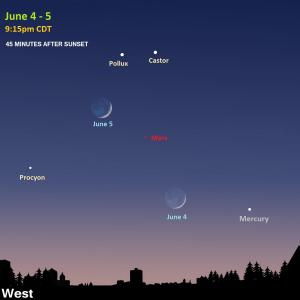 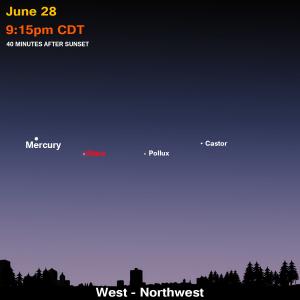 Mars and Mercury switch places this month in the west after sunset. The “M” planets will not be an easy sight, but can be viewed with a little patience and an unobstructed view to the western horizon. Use the Moon as your guide June 4-5. 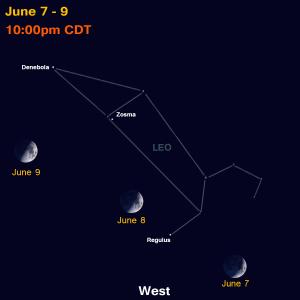 After encountering the “M” planets, the Moon passes in front of the zodiac constellation Leo from June 7-9. Losing Leo in the western sky is a sky time sign that the full heat of summer is soon to come. 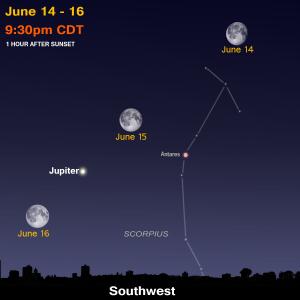 Jupiter is at opposition on June 8, meaning opposite the Sun, like the full Moon. The largest planet rises at sunset and sets at sunrise. Look for the Moon shining nearby on June 14-16.

Saturn doesn’t reach opposition until July 8, so it rises about two hours later than its bigger cousin Jupiter. On June 1, the distant gas giant rises about 11 p.m. CDT and on June 30 it rises at 9 p.m. CDT. The Moon shines very close to Saturn on June 18. 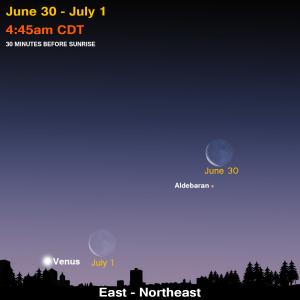 Venus will be a challenge to see before sunrise, but the Moon may help on the very early mornings of June 30 and July 1.