The U.S. Lifesaving medal was established in 1874 for anyone who saves or attempts to save a drowning person from a shipwreck or any other type of water-related danger. It was originally granted by the U.S. Life Saving Service through the U.S. Treasury Department (now the United States Coast Guard) and is only awarded to United States citizens whose act of bravery occurs in U.S. waters. Citizens can be awarded a gold or silver medal. Anton Oleson was the head of a lifesaving station in Milwaukee's harbor when, on September 9, 1875, the bark "Tanner" was sinking in the harbor. Oleson saved the lives of several people onboard, for which he received this rare silver medal, one of the earliest awarded. 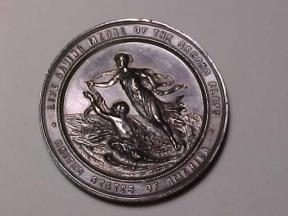