The Navajo rug collection is the largest museum-held collection of its type in the state of Wisconsin, comprising over 200 rugs representing all major types, ages, and styles. As early as the 1800s, the Navajo were recognized for their high quality of weaving by both neighboring American Indian groups and the Spanish. The changing designs of the rugs have been influenced by trade and later, tourism. Several examples of these rugs can be seen in the Southwest exhibit on the Second Floor. 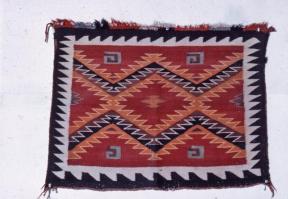