Milford Chandler was an automotive engineer and collector of American Indian material. He did most of his collecting between 1915 and 1926 while living in Chicago. The Miami material was collected by him in Peru, Indiana. The material includes a woman's robe, a pair of woman's leggings, a pair of men's leggings, and a hair ornament. The majority of the Miami were relocated in the 1800s to Oklahoma. Those who stayed in Indiana became largely acculturated into American society; as a result, material culture from the Indiana Miami is quite rare. 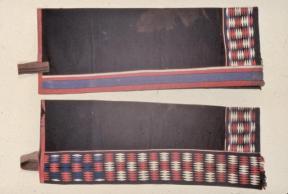