George West, a Milwaukee lawyer with a strong interest in archaeology, helped found the Wisconsin Archaeological Society in 1903. West also served on the Board of Trustees of the Milwaukee Public Museum for 32 years, for most of which he was president. Particularly interested in Native American pipes and smoking customs, West began collecting pipes around 1873 and continued to do so for several decades. The West pipe collection consists of 516 pipes; the majority are Native American. They represent all typical pipe styles found in the United States, three-fourths of them from Wisconsin. His is the largest single collection of Wisconsin pipes, and his two volume set Tobacco, Pipes, and Smoking Customs of the American Indians is still a primary reference. 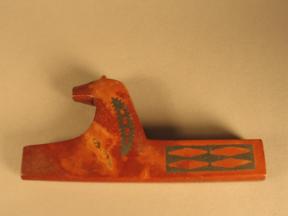