The Swiss Lake sites were first excavated in the mid-1840s and popularized by Swiss archaeologist Ferdinand Keller. Their interpretation as villages located over the lakes brought them much acclaim and made the collections from the sites' excavations much sought after by museums worldwide. Today, it is known that some, but not the majority, of these sites were built over water. They date from the Neolithic through the Bronze Age (4000 BC-700 BC). The sites are known for preservation of organic materials such as plant remains, wooden artifacts, bone, and textiles, like the one depicted here, that do not usually survive in the archaeological record. Most of the Swiss Lake collection at the Milwaukee Public Museum comes from the site of Robenhausen, Switzerland, located east of Zurich. 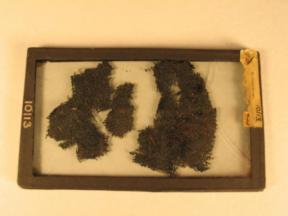