The Carl P. Dietz Collection of business machines currently numbers approximately 1,200 machines of which 900 are typewriters. The collection reflects the diversity of typewriter manufacturers and the development of machines from the 1870s to the late 1980s. The Dietz Collection holds Museum-made models of the earliest typewriters designed by Christopher Latham Sholes, post-1873 Remington production models, and many seminal typewriters of the late 19th and early 20th centuries. The business machine collection is supplemented with a collection of typewriter trade literature (manuals & advertisements) and the James Densmore Papers related to the refinement of the Sholes typewriter.

Carl Praetorius Dietz (1875-1957) came to Milwaukee with his German immigrant parents in 1881. Dietz worked in various business endeavors before his election as justice of the peace in 1902. A well known socialist party member, he later served as an acting judge and City comptroller. He left office in 1912 to develop an insurance agency and was again elected to public office (10th Ward Alderman) in 1918. Dietz served on the board of the Milwaukee Public Library, was a Mason, a Knight of Pythias, and a member of the Old Setter's Club of Milwaukee. Carl P. Dietz worked with the Milwaukee Public Museum from the 1920s until his death to build a collection of typewriters memorializing the work of Sholes and to place the typewriter squarely in Milwaukee and American history. 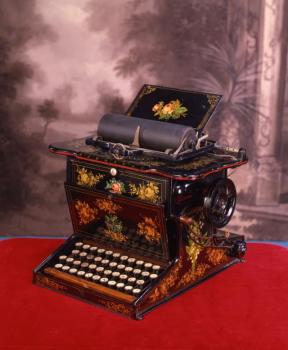