Found less than 30 miles from the Milwaukee Public Museum on a farm in the small town of Paris in Kenosha County, the Hebior Mammoth is among a group of important finds that help date the early presence of humans in North America. 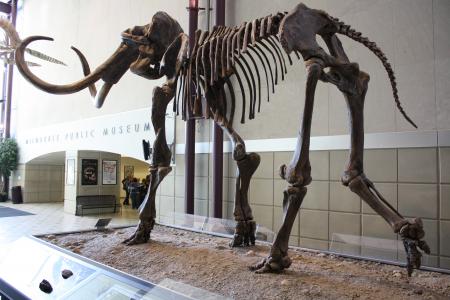 In the early 1990s, a group from Marquette University, led by David Overstreet, was excavating a different mammoth in Kenosha County when John Hebior, a farmer living near the excavation site, approached the researchers with a large bone found on his property in 1979 that he had kept because of its unusual size.

The researchers knew on sight that what Hebior had was another mammoth bone, and they soon began excavations on Hebior's property.

The Hebior Mammoth is significant for several reasons: 85 percent of the bones are present and intact, a rarity for such a find in North America, and there are visible butchering marks apparent on some of the bones.

These marks are very important because of the age of the bones: carbon dating places the mammoth's death at 14,500 years ago, which proves man existed here 1,000 years earlier than previously established by 13,000-year-old artifacts and specimens excavated elsewhere. Although the existence of older sites had always been theorized, it wasn't until the Hebior Mammoth and other sites in southeast Wisconsin were excavated that such proof was found. In summary, the Hebior Mammoth site, and the bones themselves, are among the oldest evidence of human habitation in North America.

In June of 2007, the Museum's acquisition of the Hebior Mammoth was made possible by a gift from the John J. Brander and Christine Rundblad Family.