“It’s like winning a lottery. Although the odds are astronomical, most weeks, someone hits the jackpot.”
- Stephen Hawking, British Physicist 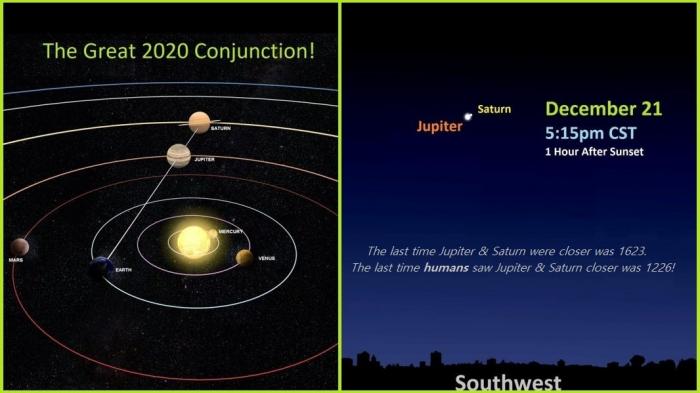 Every clear night this December, step outside and treat your eyes to an unfolding sky event. Shortly after sunset, watch Jupiter as it gradually nears Saturn low in the southwest sky. December 21 will be the big night: Human eyes will see Jupiter and Saturn shine very close-together, closer than anyone has seen since the year 1226 almost 800 years ago. 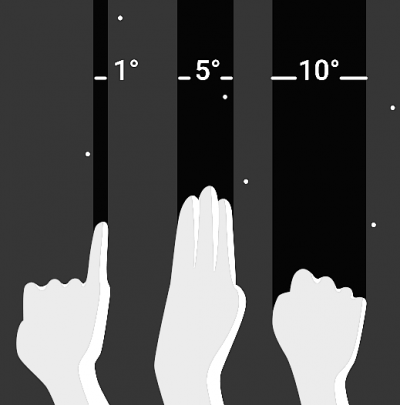 In 1623, these two planets were closer. Unfortunately, no one could see them as they were too close to the sun. Research shows the last time Jupiter actually totally eclipsed Saturn was 8,000 years ago.

How close will these two giant worlds be in the sky? The answer is 0.1 degrees apart. That is one-tenth of your pinky finger held out at arm’s length. Another way to estimate is using the Moon; it is 0.5 degrees across. So the planets will be one-fifth the width of the Moon apart. Your eyes should see this tiny gap, but it will not be easy. Why? Jupiter shines about 12 times brighter than Saturn!

Jupiter and Saturn “get together” in the sky once every 20 years. It’s the rarest of bright planet conjunctions because these two are slowpokes. Saturn takes nearly 30 years to go around the sun, while Jupiter takes almost 12 years. Therefore, it takes 20 years for Jupiter to pass Saturn, as seen by us on Earth.

As you enjoy the planet sights, remember the illusions of this great conjunction. First, while the changes of the planet positions from night to night seem slow, these worlds are moving crazy-fast around the sun. Jupiter moves eight miles per second and more than 8 million miles every Earth-day. Saturn travels a little slower—about four miles per second. Second, when Jupiter and Saturn are lined up, there are 407 million miles between them. When they are opposite from each other (different sides of the sun) they are 1.4 billion miles distant.

The Odds Are Astronomical 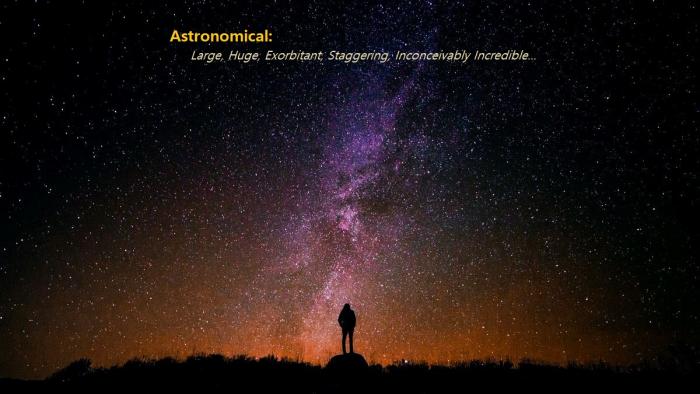 I often hear the word “astronomical” tossed around in everyday conversations. It makes sense. Many of our Earthly experiences are hard to understand. Certain events we encounter have numbers that are hard to fathom. How, then, can we expect to comprehend the immensity that lies beyond the Earth—the truly astronomical?

Let’s start with a common expression: “The odds of winning are astronomical.” As I checked Google this morning, the current chances of winning the Powerball Lottery are 1 in 292,201,338. These odds are determined by taking the possible winning numbers and then dividing that by the total number of possible numbers. 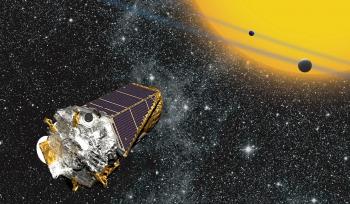 It turns out that 292,201,338—call it 300 million—is also the recent estimate of the number of Earth-like planets in the Milky Way galaxy, give or take.

All these possible Earth-type exoplanets come from the Kepler telescope. All told, this eye on the sky discovered more than 4,000 exoplanets. Though the mission is done, scientists scoured its data to find the number of planets going around a sun-like star in its habitable zone—a place where liquid water should exist.

Astronomers agree almost every star has planets, but only four percent of the stars in the Milky Way are like the sun. Taking this information, and data from other telescopes, they conservatively estimated the 300 million Earth-like planet number. Higher end estimates put the number over a billion, easily. 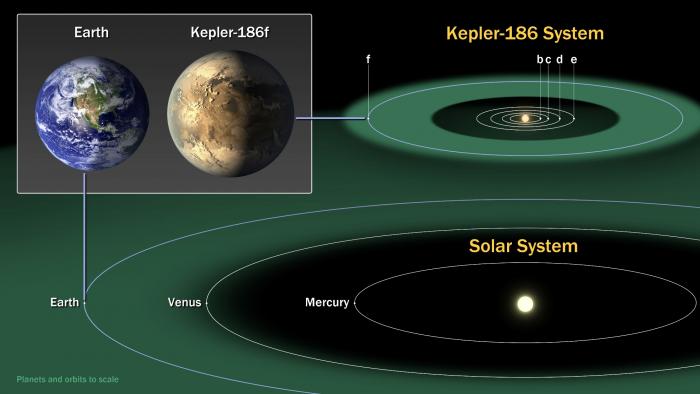 One of the 300 million Earth-like planets is called Kepler186f. It is the first validated Earth-size planet to orbit a distant star in the habitable zone. We do not see this planet directly. The picture above is an artist’s drawing. Still, research shows it is 10 percent larger than Earth, and rocky. Kepler186f orbits its sun-like star once every 130 days. Its distance from Earth is about 500 light-years.

Based on their estimate, the Kepler team calculated an Earth-like planet could be located only 20 light-years from us. They also surmise four of these planets could be within 30 light-years.

Most astronomers gauge the number of stars in our galaxy is between 100 billion and 400 billion stars. If we call it 300 billion, then one star out of a thousand might be like Earth and perhaps has a good possibility for life. Since we only see 1,000 stars on a clear night far from city lights, then one of those stars we gaze upon might have a planet like ours. Maybe...

We have been estimating the odds of faraway Earths (and possible intelligent life) ever since we pondered the starry skies. As our science and discoveries grew, our guesses gained a little more relevance. The Drake equation started 60 years ago from astronomer Francis Drake. It is simply a way to quantify someone’s estimate of intelligent life beyond Earth. They are all personal conjectures, of course. You can do it yourself. I did it once and came up with 100 intelligent civilizations beyond the Earth. What are the odds I’m right? Well, that’s truly astronomical!

Each year, our telescopes probe further and grow a bit more sophisticated. Our “guesses” get a little better. In my view, the Kepler people have produced a very solid estimate of 300 million Earth-like planets in our galaxy, astronomically speaking.

Eclipsed by the Virus 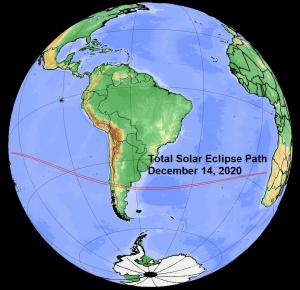 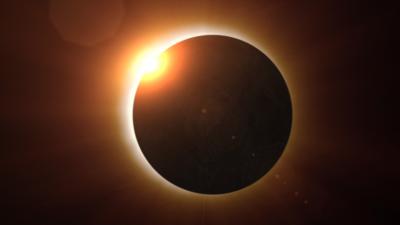 Many eclipse chasers (myself included) were ready to venture thousands of miles to experience the eerie splendor of a total eclipse of the sun on December 14. However, COVID-19 travel restrictions have put almost all of these plans on hold.

Still, people can watch totality on the internet. The Exploratorium will host an eclipse viewing from Patagonia in Argentina. More information at their website. Another online viewing is by CosmoSapiens. 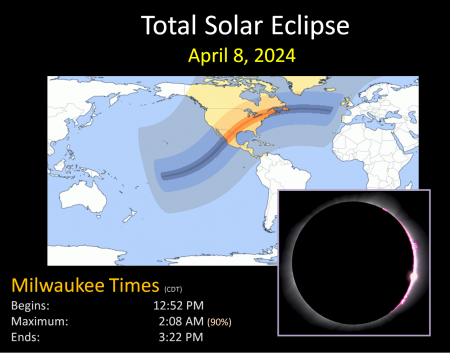 Don’t forget to mark your calendar for the next big total solar eclipse across America on April 8, 2024. While people in Milwaukee can see 90% of the sun eclipsed, it is best to travel to totality and see 100 percent! 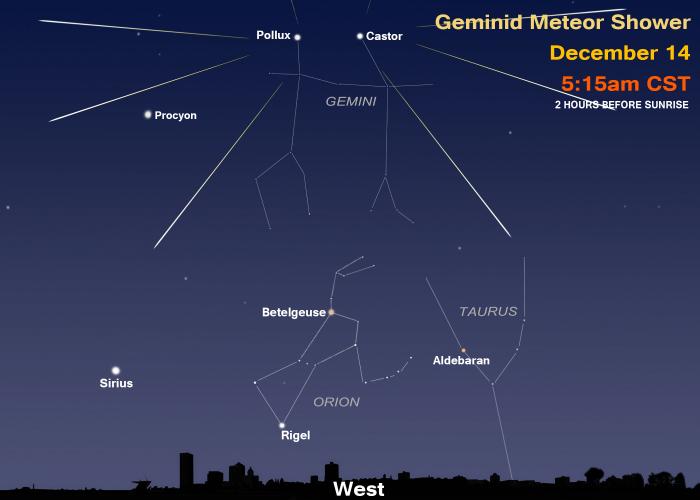 The Geminids in December have as many meteors as the Perseids in August—about 50 to 60 meteors per hour. The trick though in our more northern climate is to head far from streetlights, brave the cold, and watch the “falling stars.”

If clear on the morning of December 14, find a nice dark spot, lie on a blanket, lawn chair, or snow, and start counting meteors. The streaks of light will radiate from the stars of Gemini. At about 5:00 a.m. CST in the morning, this constellation will be high in the west.

Most meteor showers are a result of the Earth passing through comet debris. As the icy rock nears the sun, rock and dust comes loose as the ice sublimates near the sun. The Geminids are different. They originate from an asteroid called 3200 Phaethon. Of all the named asteroids, this one comes closest to the sun, allowing small dust grains to separate. Some scientists call it a "dead comet" or sometimes a "rock comet." 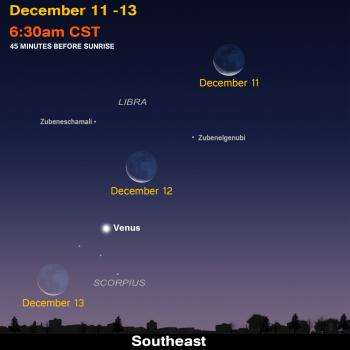 Venus blazes bright before sunrise in the southeast skies. The scorching hot world rises two hours before the sun at the start of December and one and a half hours at the year’s end. The Moon joins Venus on the cold mornings from December 11-13. 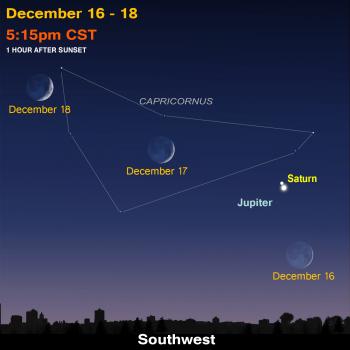 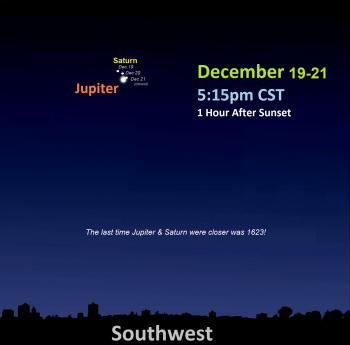 Jupiter and Saturn start December only two degrees apart—four full moon widths. From December 12-29, they are within a degree of each other. On the winter solstice, December 21, they will shine almost as one. Remember, a pair of binoculars will definitely enhance your view. The Moon orbits by from December 16-18. 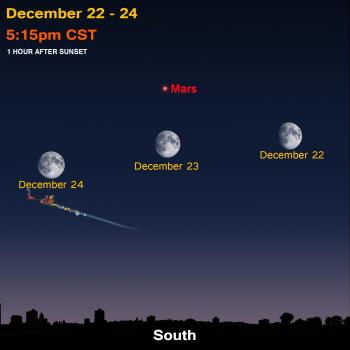 Mars fades a bit this December, but still shines as one of the brightest stars, except for Sirius. Gaze easily at its bright orange-red light in the south sky after sunset. The Moon swings by the red planet for the holidays from December 22-24. Remember, NASA’s Perseverance rover will land on Mars in mid-February 2021!