Four to Mars This July

At first, we saw Mars as a god. In the 17th century, a few adventures were penned about going there. By the late 19th century, astronomers thought they saw canals—signs of life—on the red planet. Fantastical stories sprang up—War of the Worlds being one of the most famous.

Finally, after many failed missions, in 1965 America’s Mariner 4 did it! It was the first spacecraft to fly by Mars and send back the detailed images. Granted, they were pretty bad compared to today, but Mars has been beckoning ever since; humans have sent 48 spaceships to Mars. Many have failed, but our collective batting average is improving.

This summer, it will be Mars-mania! Four missions to Mars are planned to launch in July 2020. Five space agencies are involved to lead this scientific assault on the red planet. Before we take a quick look at these voyages, let’s find out why this July?

Every 2.2 years, Earth and Mars are aligned close enough in their orbits to open what rocket engineers call a “launch window.” The last window was May 2018 when one spacecraft set sail for Mars — NASA’s Insight lander. Insight is digging deeper into Mars than any other spacecraft. It joins seven other missions currently active at the red planet.

Mars is a ways away, but when the two planets are on the same side of the Sun, the distance is much shorter. In October 2020, they will be only 38 million miles apart—but to maximize the best trajectory, space crafts set sail about three months earlier. They will then land about four months after their close approach in October.  This means these four Martian endeavors will arrive in February and March of 2021.

Let’s take a closer look at these new scientific ventures to Mars.

The Mars 2020 Rover will be NASA’s fifth “Mars car,” if all goes well. A first will be a tiny helicopter, or drone. The Mars Helicopter will scout ahead of a planetary surface rover to provide aerial images of the terrain to make better science decisions for the rover. The Martian air is extremely thin, so many tests took place in near vacuum environments to get this robot ready for launch. It weighs four pounds and will fly at about 2,000 revolutions per minute (rpm). The rover itself looks like much like Curiosity rover, which has been roaming Mars since 2012.

China landed a robot on the Moon’s dark side last year and hopes they can follow that up with a successful trip to Mars. Their probe plans on orbiting the red planet and deploying a rover on the surface.

This mission started in 2016 with a successful orbiter and a lander, which unfortunately failed. The ExoMars Trace Gas Orbiter recently studied the impact of the recent planet-encompassing dust storm on water in the atmosphere. It has also measured a surprising lack of methane, one of the signatures scientists look for as potential signs of life. The 2020 mission will send a Russian lander and a European rover to two Martian locations rich in ancient organic material. The rover is called Rosalind Franklin after the scientist who helped solve the structure of DNA back in 1953.

This is the first mission beyond Earth orbit for the United Arab Emirates. The goal is to map out the first global image of the air encircling Mars. It will try to deduce the history of the Martian thicker atmosphere and why most of it escaped into space.

Spinning in the Solar System

Why does the Earth spin? That’s a common question here at the Planetarium. What do you think the answer is?

Gravity? Nope. Gravity is the reason we don’t go flying off as the Earth spins. We spin about 800 miles per hour here in Wisconsin, but our planet is almost 8,000 miles in diameter and weighs 6 x 10^24 kilograms (kg), or 13 trillion-trillion pounds. So gravity keeps us well-grounded.

Another force? Something that’s pulling or pushing on our planet? No, that’s not the answer. The Sun’s immense mass warps spacetime into a gravity well that keeps the Earth in orbit, but that doesn’t cause our world to spin.

The Moon’s gravitational force does affect the Earth’s spin, but its gravity didn't cause it. The Moon actually slows our rotation down. Back in the time of the dinosaurs, Earth spun once every 23 hours. In the future -- 150 million years from now -- Earth's day will be 25 hours long. Billions of years from now, our world will have slowed down to 50 hours per day.

We experience this Moon “tug” every 18 months or so when we add a leap second! The next one might be added on June 30, 2020. There is a complicated formula to determine their dates, but Earth's rotation speed has slight, unpredictable variations that can cause the date to change. 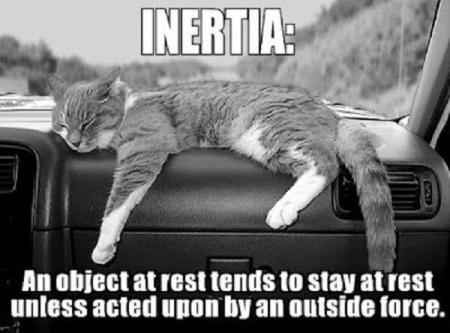 So what makes the Earth spin? Inertia! You’ve probably joked about inertia, like in the cat picture.  Inertia is Isaac Newton’s first law of motion, which states, “An object at rest stays at rest and an object in motion stays in motion with the same speed and in the same direction unless acted upon by an external force.” In other words: Objects keep doing what they are doing whether they’re in motion or not.

Angular momentum is like inertia for rotating objects. The Earth was born spinning. Our entire solar system was born spinning. The Sun and all the planets originated from a huge nebula of gas and dust  that began rotating as it slowly collapsed upon itself due to gravity. The Earth would keep spinning at its same rate forever if there was no outside force acting on it.

But as we saw earlier, the Moon’s gravity slows the Earth’s rotation. But the total angular momentum in any closed system must remain constant. This means Earth returns a force that causes the Moon to spiral away from the Earth, about 1.5 inches per year. The Earth also slows down the Moon’s rotation since the Moon is tidally locked by gravity to the Earth. Yes, the Moon is rotating. It rotates once 27.3 days now—just like its orbital time. These times will stay locked far into the future, meaning we will always see the same face of the Moon.

This fatal future makes the mind spin. Time to head back to the present day and maybe just watch all the planets spin in their present speeds! 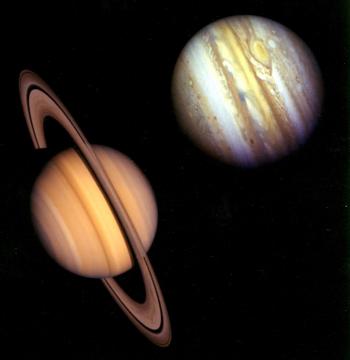 While there are many great cosmic events for 2020, Jupiter and Saturn’s Great Conjunction tops the list. These two giant gas worlds line up somewhat close once every 20 years. But shortly after sunset on December 21, Jupiter and Saturn will be so close their light will appear as one in the sky. In fact, both planets will be in the same view of a high-powered telescope! These “wandering stars” haven’t been this close in the night sky since 1623!

Jupiter and Saturn start 2020 in the morning sky, stay up most of the night during summer, move even closer through autumn, and then merge as one at the start of winter. Track these two jewels all year long!

January 5: Earth at perihelion, closest point to the Sun

January 10-11: Penumbral Lunar Eclipse (Not visible in Wisconsin, most of North America)

May 31: Venus sets 30 minutes after sunset

July 4:  Earth at aphelion, the farthest point from the Sun

July 13: Jupiter at opposition, opposite the Sun, up all night 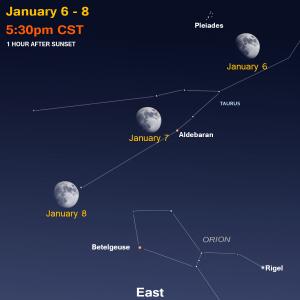 The bright stars of Orion, Taurus, and the beautiful Pleiades star cluster can be seen in the east right after sunset. Notice the red-orange colors of Aldebaran in Taurus and Betelgeuse in Orion. Rigel will have a very slight blue color. 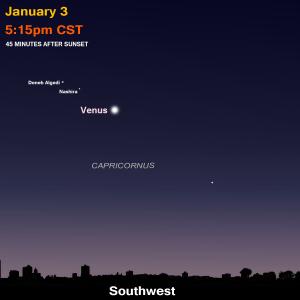 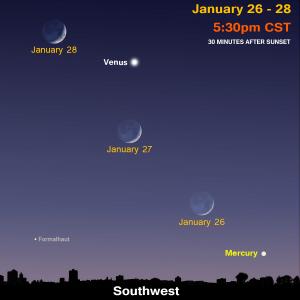 Venus climbs higher and higher in the southwest after sunset. Its brilliance makes it very easy to see. Watch for the Moon near little Mercury on January 26 and then glide by Venus on January 27-28. 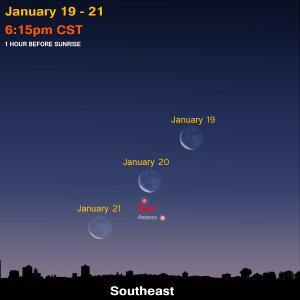 Mars rises three hours before the Sun and shines with the red star Antares in the southeast morning sky. Antares will be a little brighter than the red planet and twinkle much more. The Moon swings by from January 19-21.

Jupiter is behind the Sun most of the month. It’s possible you might see Jupiter just before sunrise at the end of January. By mid- to late February, spotting the largest planet will be no problem.

Saturn is in conjunction with (behind) the Sun on January 13. This is when the Earth passes it on the solar system racetrack. Like Jupiter, Saturn becomes visible towards the end of February in the morning sky.