“The light from a galaxy a billion light-years away, for instance, will take a billion years to reach us. It’s an amazing thing. The history is there for us to see. It’s not mushed up like the geologic record of Earth.”
- Margaret Geller, American Astrophysicist

Back to the Beginning 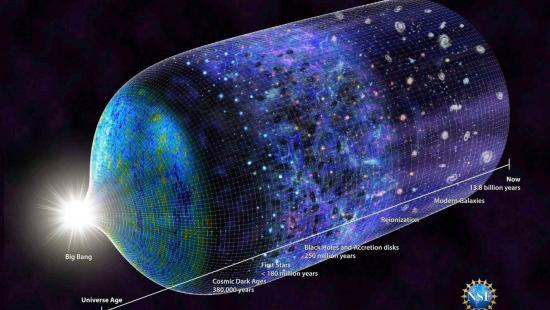 Astronomy is a little like geology. They both look back into time, hunting for fossils that tell us how we got here. Let’s take a trip back to the beginning of time. We’ll start with the first life fossils.

The oldest evidence for life on Earth comes from Western Australia. Lime-secreting cyanobacteria built up rocks mounds called stromatolites. They have been dated back in time to 3.5 billion years ago, the oldest life relics on Earth. 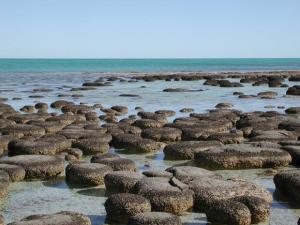 The oldest known rocks were found in Canada, on the Hudson Bay in Northern Quebec. Geologists found an expanse of bedrock called the Nuvvuagittuq Greenstone Belt. Here, rocks dating back 4.28 billion years were detected. They first formed on a very young Earth, which formed 4.6 billion years ago.

In space, we can look back even further in time, before the Earth and life even came to be. Since stars and galaxies are so far, it takes a long time for their light to reach us; so we don’t see them as they are today, but as they were, millions and billions of years ago.

Around 9 billion years back in time, we detected Icarus, the farthest singular star our telescopes have ever seen. Tremendous telescopes would normally never see this star. But astronomers took advantage of gravitational lensing. This is where gravity from very massive objects bends spacetime and, therefore, amplifies the light from behind them. We see Icarus when the universe was still relatively young. 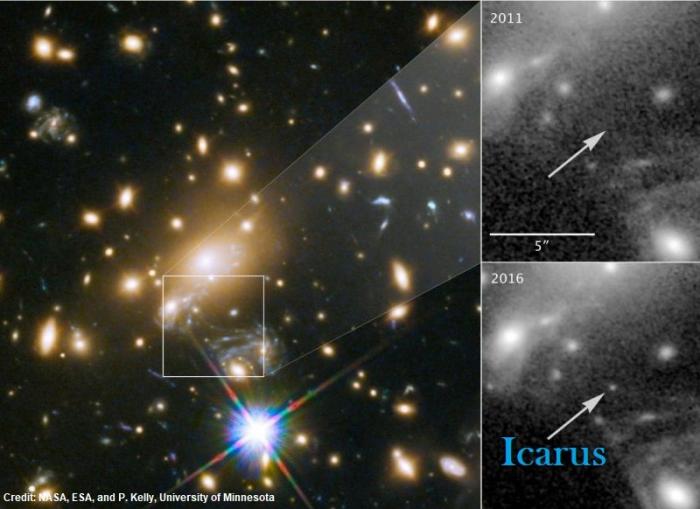 Uncovering the farthest known galaxy—a smaller with only one billion stars (our Milky Way has 200 billion)—was not easy. Again, we utilized a huge gravity well in space to magnify this more-distant galaxy. Astronomers also combined the power of the great Hubble and Spitzer space telescopes. 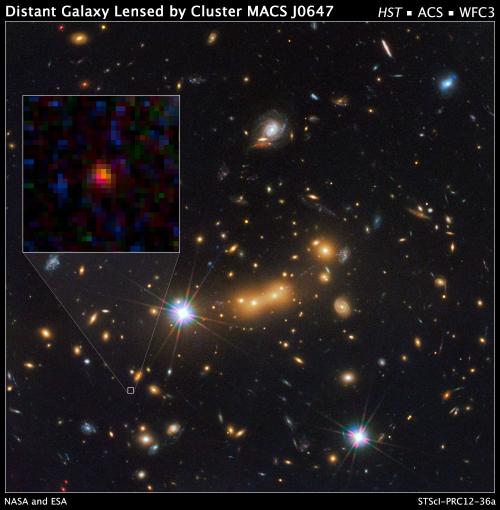 The galaxy has been named MACS0647-JD and is located about 13.3 billion light years away. There is no fun nickname yet, so for now, I’ll call it the diminutive red glob. Its enormous distance means we are seeing a very young galaxy, born only 420 million years after the start of it all—the Big Bang.

Today, of course, this galaxy would be very old, and many of the stars would be long gone. Material from the death of these stars was used in the formation of the next generation of stars. It is the ultimate recycling program.

Looking at a very distant star or galaxy is like looking at a picture of a young Albert Einstein. Einstein is young, but the picture itself is now very old. Einstein left us in 1955, but his work on gravity keeps being used by many scientists today. 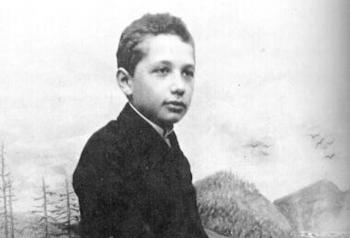 The youngest picture of the universe is the Cosmic Microwave Background or CMB. It’s a map of the universe when it was just 378,000 years old. The splotchy colors you see reveal tiny temperature differences. Blue areas are about 1/10,000 degrees hotter than the red regions. 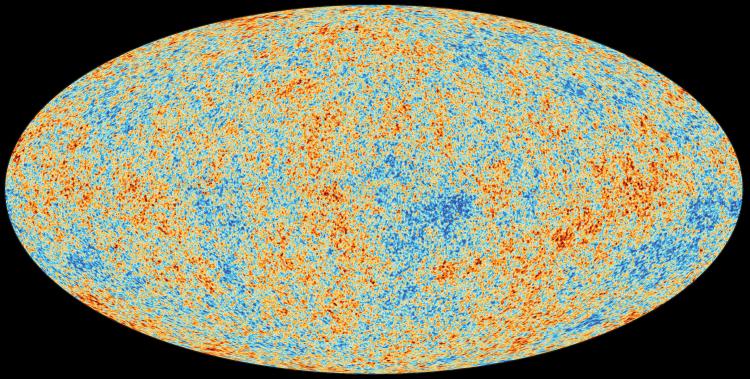 The CMB is the invisible leftover glow from when the universe first became transparent. It denoted a time when the universe had expanded enough that light could race across the cosmos in every direction. Our telescopes detect this faint radiation all around us. In fact, two percent of the fuzz on your TV set comes from the cosmic microwave background. 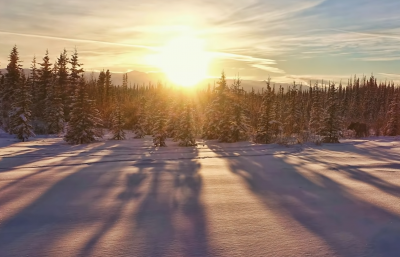 On the winter solstice, December 21, the sun returned. Each day since, daylight hours have been increasing and the sun is climbing a little higher in the sky. So why does it stay so cold? Or, when does it finally get warmer (at least for us living in the northern hemisphere)?

Since the summer solstice, the northern hemisphere of the Earth has been receiving less and less sunlight or energy. Our planet's momentum has been swinging toward the cold for so long that it just can't stop on a dime and say, "Okay, it's the December solstice, time to warm up." There is a delay, so the Earth’s northern part keeps getting colder.

A way to understand the lag effect is a hot whistling tea kettle. When you pull it off the stove, the whistling will continue for a little bit, even though you removed it from the heat source.

So January 25 may be really cold this year, but celebrate anyway. The average temperature starts to go up! Though, of course, it will be a few more months before spring truly arrives, and probably another month before it’s warm enough for a cookout. 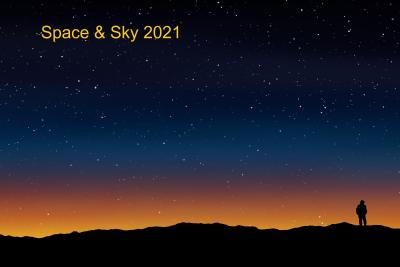 A rover landing on Mars tops the list for sky and space events in 2021. Perseverance left Earth on July 30. NASA hopes to land it safely on Thursday, February 18.

Wisconsinites will witness three eclipses in 2021. First, a partially eclipse moon can be seen just before sunrise on May 26. Then, another small one occurs on June 10, this time a solar eclipse. The sun will rise partially eclipsed by the moon for a short 28 minutes. Finally, a total lunar eclipse almost ( 97%) takes place in the middle of the night on November 19. 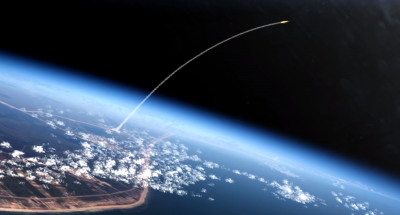 February 6: 50th Anniversary of the First Golf Shot on the moon—Alan Shepard, Apollo 14

March 26: Venus at superior conjunction—behind the sun as viewed from Earth

May 5: 60th Anniversary of First American Person in Space—Alan Shepard

May 28: Venus and Mercury close in evening sky

July 5: Earth at aphelion, the farthest point from the sun, 94.5 million miles

September 22: Fall arrives with the autumnal equinox at 2:21 p.m. CDT

November: Launch of NASA’s Artemis I to moon, test mission, no astronauts 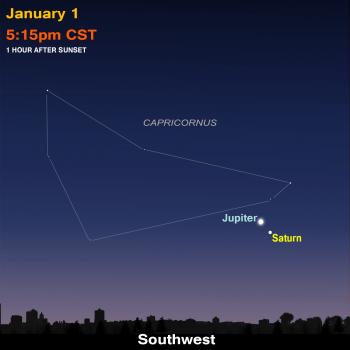 Jupiter and Saturn are in superior conjunction, or invisible behind the sun at the end of month. You can still catch them in the early evening at the start of January. By late February, you can observe these giant worlds in the morning skies. 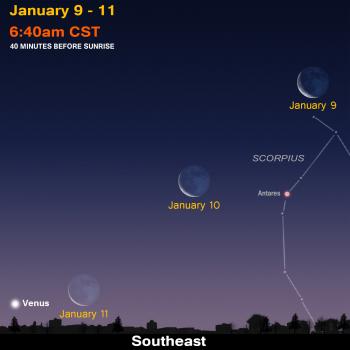 Venus keeps getting a little lower in the morning sky. It’s so bright, though, you should have no trouble viewing it if you have a clear path to the southeast sky. Watch for a waning crescent Moon near this hot world from January 9-11. 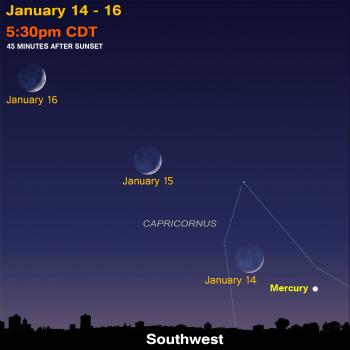 Tough-to-spot Mercury might be within reach in mid-January. A waxing crescent Moon shines near the smallest planet on January 14. 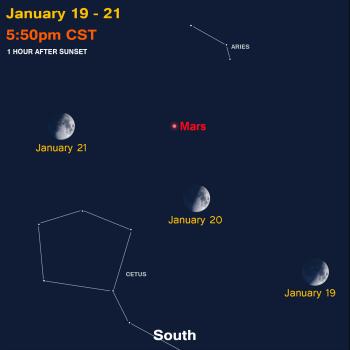 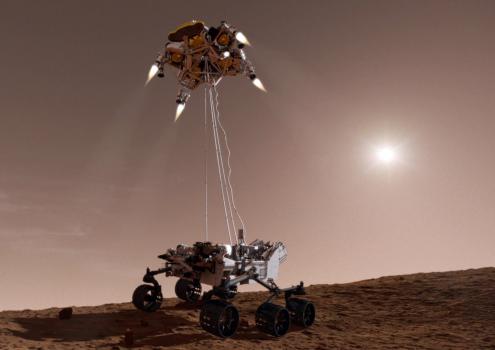 Mars mixes with the first quarter Moon high in the south after sunset from January 19-21. Remember, we land the Perseverance rover on the red planet in mid-February. It left in late July 2020, a seven-month journey!

See the Universe through a telescope!