Neil deGrasse Tyson often uses humor in his astronomy posts, lectures, musings, and videos — he makes the universe come alive. One of his favorites is: “A photon checks into a hotel. The bellhop asks, ‘Sir, do you have any luggage?’ The photon responds, ‘No, I'm traveling light.’" 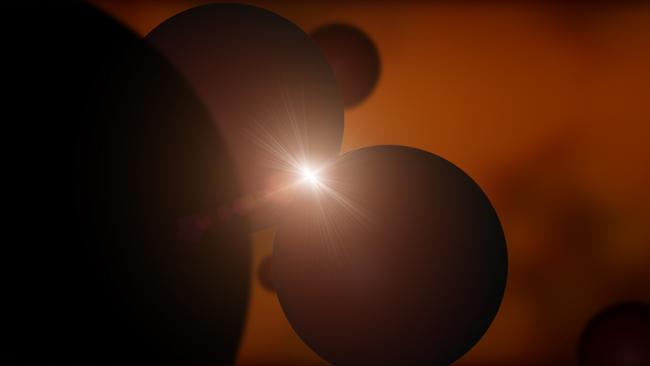 Hearing this someone might wonder, what is a photon exactly? A photon is light. It is produced from an atom. An electron gets energized and moves from its ground state to a higher one; when it falls back down, poof! A photon—energy—light—is created.

Of course, photons are generated constantly and in unbelievable numbers. The sun produces a trillion, trillion, trillion, billion photons every second (that’s a 1 with 45 zeros after it). Photons bombard us humans, too—over 500 million of them strike our eyes every second! They crash into us at the speed of light. No worries, though; photons have no mass — they’re weightless.

Since photons come from atoms, we have to do one more joke: “Why can’t you trust an atom? They make up everything.” 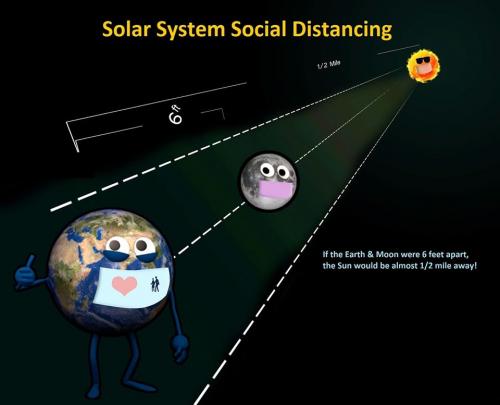 One little joke about a photon and look where it led you—if you are still reading. ☺ As science educators here at the Planetarium, we sometimes try to blend a little humor into our shows and newsletters! Not easy to do, but I did say we “try.”

Here at the Planetarium, we created this Earth-Moon-Sun social-distancing cartoon. In part, it was to have a little fun amongst the worrisome pandemic... Make people relax, maybe—if only for a moment. We also wanted to demonstrate the unfathomable distance difference between the sun and moon from Earth. Maybe someone seeing will realize that if the sun is 400 times further away than the moon, it must be 400 times bigger because they appear the same size in the sky.

I belong to a Facebook group called Astronomy Cartoons. It’s a fun and quick escape. I often laugh. I also find myself learning. 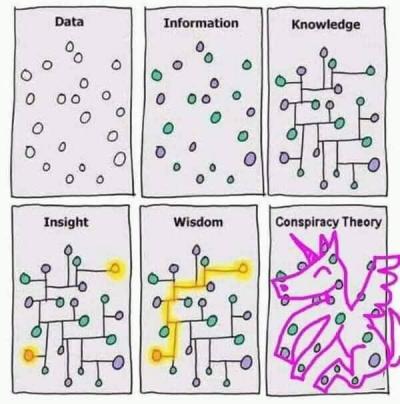 This illustrated cartoon about conspiracy theories made me laugh out loud. The scientific method is often misunderstood. It takes a lot of work, exploring, investigating, observing, measuring carefully, and recording data precisely as possible. In short, science collects the evidence and tries to find the causes and effects. Like the cartoon, scientists connect the dots to explain what is happening. If another scientist can replicate the connections, then a new discovery may be on the horizon. Conspiracy theories connect the dots, too, but let’s just say… It’s not science.

Some of you might recognize this one about the start of the universe from Bill Watterson’s Calvin and Hobbes.

This jovial reference to the Big Bang is used by many cosmologists and astronomers at the start of their lectures. Scientists love it because the start of the universe was neither large nor loud; it was infinitely small and dense and there was no space that existed to carry any sound. 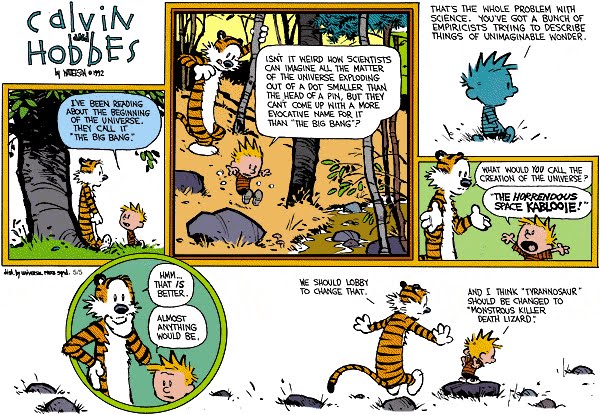 In fact, “Big Bang” was coined by an astronomer who didn’t believe the universe sprang into existence this way. His name was Fred Hoyle, and he derided this theory that all the matter in the universe was created in one miniscule, yet powerful, beginning. Hoyle believed in the "steady-state" theory that says the universe didn’t start from anything but has always been here. 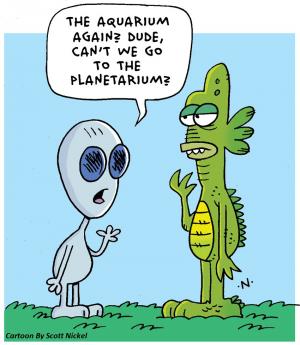 I recall a teacher back in college who would always do one joke per class. As a young student, many times I just rolled my eyes. Other times I laughed. But overall, I appreciated the simple idea of making learning fun. Threading a bit of light-heartedness in a complex subject helps understanding. It can reignite curiosity when class gets boring. Humor is a great way to teach (with the right balance, of course).

Not only do we witness humor in classrooms and learning, we hear it many times a day in conversations with co-workers, family, and friends. Truly, laughter is medicine. Maybe it’s the best, as people say. It can get us through a tough day or even help with a sad situation. It helps humans connect and realize the many things we all share.

Wander too close to a black hole and yes, gravity wins. Anything that crosses the invisible boundary called the event horizon is lost into the oblivion of the black hole. It is the ultimate point of no return. 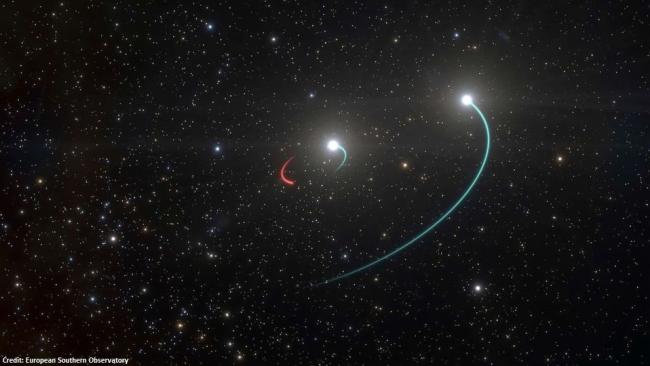 Are we in jeopardy of this intense gravity? Back in May 2020, a black hole was discovered only 1,000 light-years from Earth—the nearest one yet! Astronomers noticed two visible stars orbiting a dense gravity well which led to its unmasking. This might seem like a scary find, but a black hole’s gravity is not dangerous to us unless the distance is reduced substantially.

If our sun was somehow squeezed small enough to become a black hole, it would be about four miles across. However, it would not swallow the Earth or affect any other planet in the solar system, because the Sun’s mass would not change.  In addition, the Earth did not change its distance from the sun. 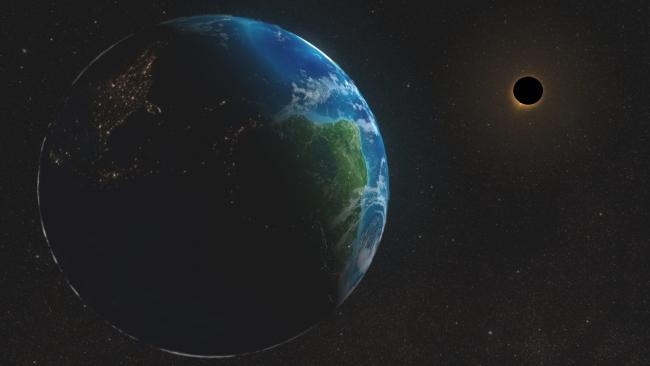 The force of gravity depends on the mass of two objects divided by their distance squared. This new black hole (even though it’s 4.2 times more massive than the Sun) is more than 63 million times farther. We’re safe!

Look out! Soon the nights will become longer than the days. The autumnal equinox is around the corner for people north of the equator. Autumn officially arrives on September 22 at 8:30 a.m. CDT, to be precise. That’s when the sun shines directly over the Earth’s equator and everyone experiences 12 hours of day and night. It also means the north pole starts six months of perpetual darkness. Here in Wisconsin, our nighttime hours keep increasing until the winter solstice, when the sun is below the horizon for 15 hours.

People living south of the equator will soon witness the start of spring. Then, the south pole is tilted toward the Sun and experiences six months of perpetual sunlight. 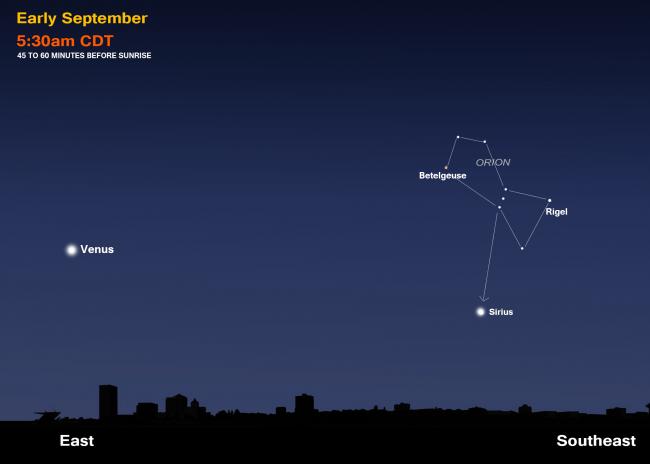 Early risers can catch the return of Venus, Orion, and the night’s brightest star Sirius. 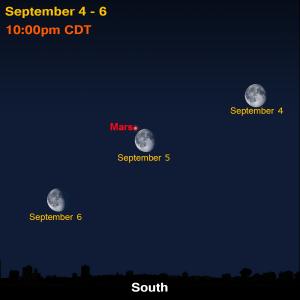 Mars rises just after 9:30 p.m. CDT at the start of September and by 7:30 p.m. at its close. Watch the Moon pass the red planet from September 4-6. On the night of 5th, a Saturday, Mars will be about the width of the Moon (half a degree) away from the Moon. 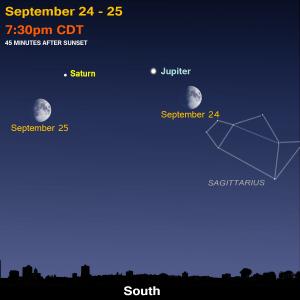 The Moon, Jupiter, and Saturn make a tantalizing trio on the evening nights of September 24-25. Watch the two gas giants get even closer all autumn. Heads up: On the first day of winter, December 21, they will appear as one in the sky—their closest approach since the year 1623. 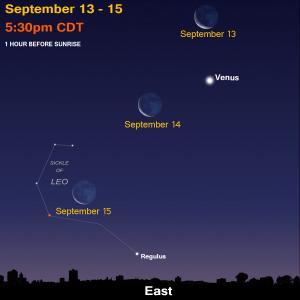 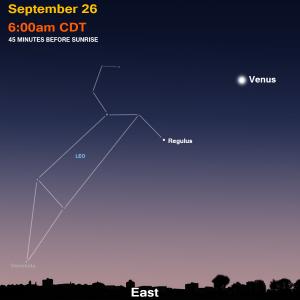 Venus is spectacular in the east before sunrise. The Moon joins Venus from September 13-14. Toward the end of the month, look for the hottest planet to near the bright star Regulus in Leo the Lion.