The Spencer Lake site was excavated in 1936 by W. C. McKern, Milwaukee Public Museum Curator of Anthropology at that time. The site is an ancient (AD 1100–1400) burial mound located near Spencer Lake in Burnett County in northwest Wisconsin. At the bottom of the mound, an intact horse skull was discovered, a startling find as it was believed that horses had gone extinct in North America around 10 million years ago and not reintroduced until the arrival of the Spanish. Two students, upon hearing of the discovery, confessed to placing the skull at the bottom of a pit they had dug into the mound, but McKern and his crew were positive that there was no disturbance of the soils around it.

The controversy lasted until 2001 when a group studying the question of pre-Columbian horses received permission from the Museum to take a small sample of the horse skull for radiocarbon dating. It proved to be modern. 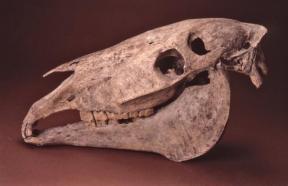