In 1926, Dr. Sidney Gullick, a missionary and educator who had lived and worked in Japan since the 1890s, created an exchange program between the United States and Japan to promote peace, friendship, and understanding. Children in almost every state raised money to send American dolls to many schools in Japan. Once the Japanese children received the dolls, they in turn raised money and sent dolls back to the United States. Kasumi Tsukuba, or Miss Ibaraki (the prefecture where she is from), was the doll sent to Wisconsin in 1927 and is now a part of Milwaukee Public Museum's permanent history collection. She arrived in the state with a chest of clothes and a parasol, along with roughly 50 other accessories. In 2006, Miss Ibaraki was flown back to Japan and returned to the company that made her in 1927, the Yoshitoku Company, where she underwent restoration. 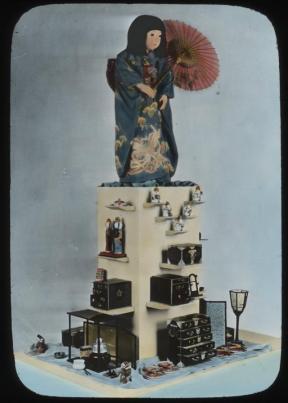