These playing cards are from the Apache, an American Indian tribe living in Arizona. Apache playing cards are thought to be influenced by the Spanish, however the cards' decorations are distinctly of the traditional Apache artistic style. Made of rawhide and decorated with a variety of pictorial designs, the cards represent numbers or face card values. Playing cards had widespread use by the Apache during the late 19th and early 20th centuries, and were even traded for by non-Apache groups. There are not many complete card sets, such as this one, that exist today. These cards a part of a larger collection donated by G. E. Copeland of Milwaukee in 1922. 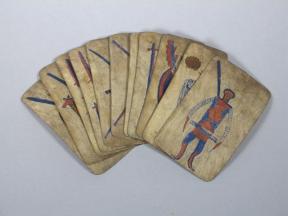