The focus of The Third Planet is the concept of plate tectonics, a now well-known concept that, at the time of the exhibit hall's construction, was quite revolutionary. 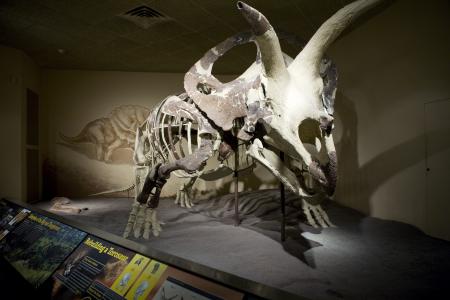 In fact, this hall was the first in North America to use this paradigm as a central theme for the presentation of earth science to the public.

The exhibit begins with a film introducing the basic concept of plate tectonics and the effect drifting continents have had in shaping earth history and the evolution of life on earth. Visitors ascend through a limestone cavern and learn what processes have shaped the earth's surface.

The local geologic past of southeastern Wisconsin is depicted in the Silurian reef diorama: A  reconstruction of how this area would have appeared over 400 million years ago when it was covered by a shallow sea. Much later in our geologic past, a walk-through glacier depicts another time in Wisconsin's geologic history. It includes a film describing the way glaciers form the landscape, as well as reconstructed skeletons, including a complete mastodon.

Though no remains exist in Wisconsin, the dinosaurs are well represented in a diorama, which at the time of installation, was the largest diorama in the North America and the first in the world to recreate life-sized models of dinosaurs in their natural habitat. The diorama is based on MPM's expeditions to Montana. All plants and animals reproduced in the diorama were found as fossils and provide a real depiction of the animals and plants that co-existed in that area over 60 million years ago. The addition of sounds and special lighting effects bring the diorama to life.