The European Village is an imaginative re-creation of carefully selected examples of homes and shops as they may have appeared about 1875 to 1925. 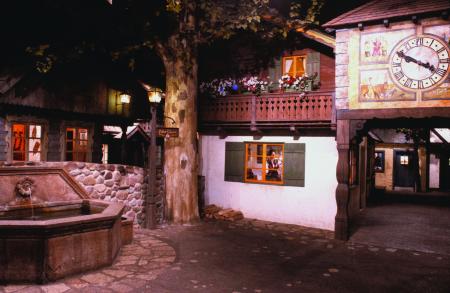 The Village provides a picture of daily life, skills and traditions that were characteristic of many Europeans who came to the United States at the time. This setting has been created to promote a better understanding of some of the diverse European heritages in the United States.
The theme expressed by the Village has been interpreted through the medium of folk culture. This was done first of all because the majority of the European immigrants to the United States came from small towns and villages rich in folk art and folklore. Secondly, many descendants of immigrants clearly identify themselves with their traditions by continuing and reviving the most visible characteristics such as folk art, costumes, food, music and dance. These expressions of heritage guided the choice of elements to be included in the Village. They illustrate and interpret the essence of the ethnic diversities and the features that bind them together.
The Village does not attempt to explain the influence these various European cultures have had on each other, but the visitor is encouraged to make comparisons and contrasts. If the representations of all the cultures in the Village have something in common, it is their simplicity of form and expressions, underlying a unique individuality. Thus, this European Village exhibit has taken unity in diversity as its theme and message.
The Village represents the buildings and other structures re-created to scale and furnished–of 33 cultures, including: Austrian, Belgian, Bulgarian/Romanian, Croatian, Czech, Danish, Dutch, English, Estonian, Finnish, French, German, Greek, Hungarian, Irish, Italian, Jewish, Latvian, Lithuanian, Norwegian, Polish, Portuguese, Russian, Scottish, Serbian, Slovak, Slovene, Spanish, Swedish, Swiss, Ukrainian, and Welsh.