Enter the Rainforest and you are immediately enveloped by a mountain of biological diversity. 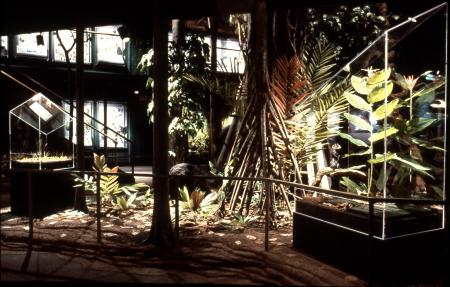 A vivid audio background with the chatter of monkeys, parrots, and other wildlife sets the stage as you gaze at huge transparent cubes filled with scores of colorful butterflies, beetles, toucans, macaws, tree frogs, jaguars, and an incredible variety of tropical plants. Displays are highlighted against a replica of a Costa Rican rainforest.

The centerpiece of the exhibit is a scaled, working waterfall patterned after one in Costa Rica. The backside of the waterfall houses a large learning center where visitors can watch specially designed video programs about tropical biology. There are a total of five video theaters covering a variety of themes.

The unparalleled exhibit is the result of five years of research, design, and construction. In March 1986, a field expedition team of 15 MPM biologists and artists traveled to the rainforest of Costa Rica for two weeks of collecting and research. With the help of biologists from the National Museum of Costa Rica, the expedition gathered materials to help bring a tropical rainforest to Milwaukee.

More than 400 impression molds of leaves, flowers, fruits, and tree bark were made. Several thousand insects were collected along with several hundred birds and mammals, following the strict international guidelines on collecting wildlife. Scientists and artists spent hours recording the sounds and sketching the beauty of the rain forest.

WHY A RAINFOREST SETTING FOR THE BIOLOGY HALL?

A rainforest contains the richest variety of terrestrial life on earth. About 1.7 million species have been formally described since the standard method of naming species was developed in 1753. Studies in the tropical rainforest, however, indicate that as many as 30 million species may currently exist which have never been seen, collected, or studied.

This forest of immense biological diversity is still a largely unexplored frontier and provides scientists with the unique challenge of studying the interrelationships of living creatures. Animals and plants in the tropical rainforest have developed special characteristics because of millions of years of close-knot living. Life in the forest is so interdependent that if an orchid would vanish, so could a bee; if the bee would vanish, so could the orchid.

Tropical rainforests are a result of hundreds of millions of years of evolution and are home to two-thirds of the world's organisms, yet millions of acres of rainforest are destroyed each year. Tens of thousands of native people who rely on rainforest for food and shelter are displaced, regional and global climates are seriously affected, and hundreds of previously undiscovered species are becoming extinct.

This is nature's fragile masterpiece known as the tropical rainforest. MPM's Rainforest allows visitors to stop, look, and understand.