“What then is time? If no one asks me, I know what it is. If I wish to explain it to him who asks, I do not know.”
- Saint Augustine

It is strange. In the past few months, you could step outside and easily observe that the star Betelgeuse (pronounced “betal-jooz”) is not as bright as it used to be. It fell out of the top 10 list of bright stars, and just recently, has dropped out of the top 20.

This changing light of Betelgeuse is not new. We have long known it’s a variable star, it just hasn’t been this extreme before. Before its recent dimming, Betelgeuse was ranked the 10th brightest star. In the past, its light has been as bright as Rigel, its partner on the other side of Orion’s belt and the seventh brightest star at night. Currently, it ranks as the 23rd brightest star. 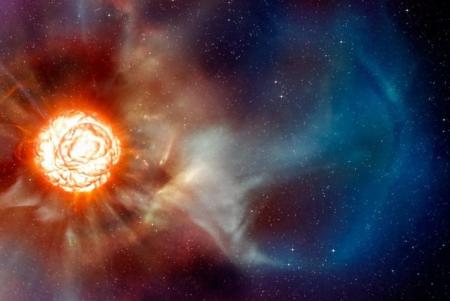 Betelgeuse is a red giant star near the end of its life. Astronomers know its nuclear fuel supply is running low. With no more fusion reactions at its dense iron core to hold it up, the star implodes, and then rebounds as a titanic supernova.

Before this colossal end, though, Betelgeuse, like all stars, goes through the convection process. Convection is a common process we experience every day: Hot gas rises, nearby colder gas descends. We see it with a boiling pot on the stove. We watch convection every time we blow on our coffee or tea if it’s too hot. Blowing away the hot gases at the top of your beverage lets the cooler air drop down and allows you to sip. 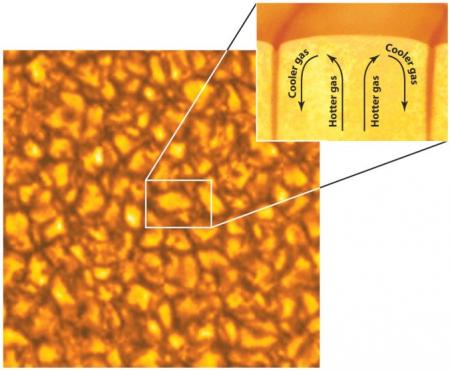 We can see our Sun’s convection cycle close up. The picture and animation above reveal dark areas called granules. This is how the Sun’s surface—the photosphere—actually appears in detailed images. The small dark regions are bigger than Wisconsin. Crazy hot gases below the surface are constantly rising and then sinking. When the slightly colder gases sink, they cause gases below to break apart into the jagged features we see all across the Sun. These convection cells are more pronounced on a mammoth star like Betelgeuse. Its reduced light could be caused by a huge amount of material sinking down from convection.

Another possibility is the shredding of the star. As a red giant star about to go supernova, Betelgeuse expands. This expansion is due to the fusing of heavier elements than hydrogen at its core. These more powerful nuclear reactions also cause the star to lose mass. Lower mass means lower gravity. Its outer edges leak out into space and escape. This growing material of gas and dust could be obscuring Betelgeuse’s light.

Is the dimming of Betelgeuse a sign of its ultimate doom? Will we see a supernova as bright as the full Moon in the sky tonight? Next week? Hopefully, it’s not in a few months. In late April and May, Betelgeuse and Orion start lining up behind the Sun and we can’t see them.

Though the dimming is still a mystery, most astronomers don’t predict the disaster for Betelgeuse anytime soon. They tend to predict it will still be thousands of years from now (which is soon in an astronomical sense). There are simply too many factors to predict an actual date. Plus, Betelgeuse is 700 light years away, so detailed analysis is not available.

When Betelgeuse finally meets its supernova end, people across the globe will see a spectacular sight. The star’s fiery finish will be as bright as the full Moon and last for months. Eventually, though, the expanding debris cloud will spread out and dim, and Betelgeuse will disappear permanently from our skies. Telescopes will still see the nebula cloud and its neutron “star” core. If the core were massive enough, it could collapse into a black hole. Predictions today say this will not be the fate of Betelgeuse.

Needless to say, Betelgeuse’s strange behavior of late is worth our attention, and not just for professional astronomers to investigate. Step outside and behold the changing red light of Betelgeuse!

Fireworks in the Sky 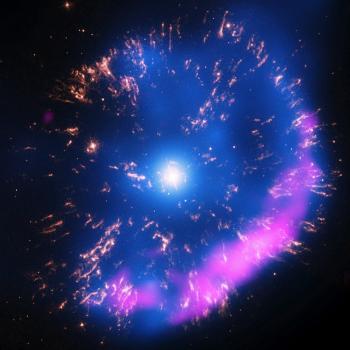 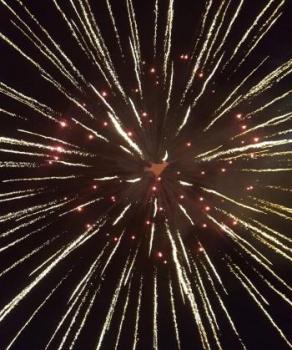 The two pictures above are both called fireworks. One is a cosmic nebula far away in space, the other is your typical celebration display here on Earth. Can you guess which is which?

The one on the left is from deep space. It is a combination photo of a stellar explosion called a nova. It was taken by three different telescopes across the spectrum: Chandra for x-ray light, Hubble for the visual part, and the Very Large Array (VLA) for radio energy.

The image on the right is from a fireworks show in La Crosse, Wisconsin. I took that photo. Long story, but I have been helping shoot off large fireworks displays since I was 12 years old.  Our group has a federal government license. I am fortunate to have very close access to pyrotechnic displays.

Though the pictures look similar, their causes are extremely different. The nova is nuclear and fireworks display is chemical. The nuclear is far stronger. Let's explore that one first.

The nuclear nova explosion that created the fireworks nebula is called GK Persei (also Nova Persei 1901). The nova blast appeared as a star in the Earth’s night sky way back in 1901. For a few days, it became one of the brightest stars and captured headlines. The cosmic eruption came from a thermonuclear explosion on the surface of a dead white dwarf star. Our Sun will turn into a white dwarf star in 5 billion years after it exhausts its nuclear fuel.

A white dwarf is small but very dense, meaning it has lots of gravity. If there’s an orbiting companion star nearby, the white dwarf will pull off hydrogen gas from this star onto its surface. If enough hydrogen is captured, then nuclear fusion reactions start up and the star detonates. A closer look reveals a series of nuclear processes where two hydrogen atoms collide to form a helium atom and release energy. We know this formula as E=mc2. It powers this nova blast and is the strongest force around.

A nova does not destroy the white dwarf completely. Only the outer layers are blown off into space. Still, this nova outburst can be seen across the galaxy. The resulting fireworks nebula is around 1,500 light years away in the constellation Perseus.

A nova is considered very small compared to a supernova. There are two types of supernovae—Type I and II. Type I is when a white dwarf star reaches an unstable limit as it steals from a nearby star and completely explodes. Type II is like what will happen to the star Betelgeuse someday soon. The massive star runs out of nuclear fuel and explodes as it collapses upon its extremely dense core. 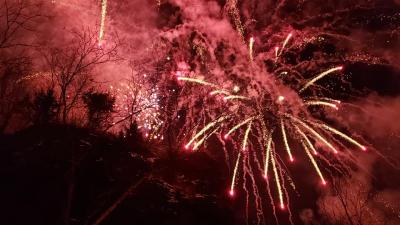 A typical fireworks explosion you see on July 4th or New Year’s Eve is chemical in nature. Chemicals in fireworks explode due to combustion. Combustion is a chemical reaction that involves oxygen mixing with various molecules. A candle flame glows because of combustion. Candles are made of paraffin, which is made from countless hydrocarbon molecules. When you provide heat from lighting the wick, the oxygen in the air starts to steal electrons from the tightly stored hydrocarbons in the paraffin. This turns the hydrocarbons into carbon dioxide and water. This conversion of molecules by rearranging electrons from one atom to another to form new molecules produces the heat and light. Mass is always conserved in a chemical reaction. (Well, almost. There is a very small loss of mass during a chemical reaction, but that’s another story.) 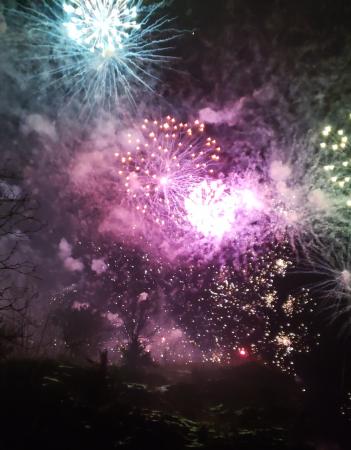 The firework’s shell (before it explodes) is a tightly wrapped cylinder or ball full of various molecules, or “metal salts.” Different combinations produce different colors. The reds come from a metal salt called strontium carbonate. The blues are produced by copper chloride.

It’s amazing that such different reactions can produce heat and light that look very similar.

Getting Leap Day right has been a difficult task. The story behind it is extraordinary.

Long ago, the Egyptians figured out the year was 365 days long by connecting the annual flooding of the Nile River and reappearance of the bright star Sirius in the morning sky. They came up with a calendar of 12 months with 30 days each, and added a special five-day period at the end of the year for religious celebrations.

The Egyptians were only off by a quarter of a day—less than one hundredth of one percent! However, their discrepancy is almost six hours a year, and that adds up quickly. Calendars soon got out of balance.

In 238 BCE, Egypt’s King Ptolemy III proposed adding a day by having a six-day religious festival every four years -- the first Leap Day! This idea met resistance and wasn’t adopted until 200 years later. When the Romans conquered Egypt, the Julian calendar, named after Julius Caesar, made Leap Day an official part of the calendar.

The story doesn’t end there, however. The Romans reasonably figured the Earth’s year was 365.25 days long but it’s not. It’s actually a bit less at 365.2422, which meant there were too many leap days happening. By 1582, the true first day of spring occurred on March 11 instead of March 21. The solution? Pope Gregory decreed that 10 days would be removed from October that year. The day after October 4 became October 15! Days and years were back in alignment with the new Gregorian Calendar.

To keep these two time units playing nice into the future, there are no Leap Days every turn of the century year except when that date is divisible equally by 400. This means we had a Leap Day in the year 2000, but will not have one in the year 2100. 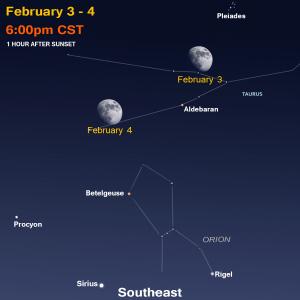 The bright stars of Orion, Taurus, and the beautiful Pleiades star cluster can be seen in the east right after sunset. Notice the red-orange colors of Aldebaran in Taurus and dimming Betelgeuse in Orion. Rigel will have a very slight blue color. 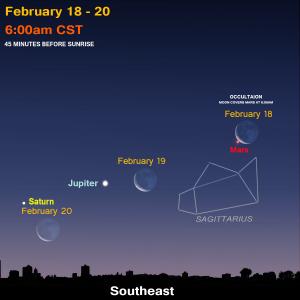 Mars brightens a little this February, but you still have to get up early to see our red neighbor. Try to head outside on the morning of Tuesday, February 18 and observe the Moon eclipse the red planet. When a planet is eclipsed by the Moon is called an occultation. Mars and the Moon will be low in the sky, and the impending sunrise will make it difficult to see, so binoculars or a telescope will definitely help.

Saturn also becomes visible in the morning sky. It will be hard to see at the start of February, but the ring jewel rises two hours before the Sun on Leap Day morning. 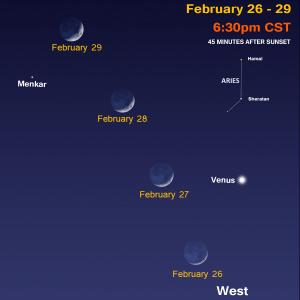 Venus climbs even higher this February in the southwest after sunset. The Moon wanders by, making great celestial pairings near the end of the month.

Mercury is visible in early February—far below Venus—in the West-Southwest evening sky. Look just above the horizon about 30 to 40 minutes after sunset.