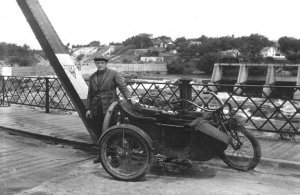 Huron Smith came to the Milwaukee Public Museum in 1917. He had received degrees from De Pauw and Cornell Universities and was an Assistant Curator of Botany at the Field Museum of Natural History, Chicago specializing in dendrology before coming to Milwaukee to head the Botany Department.

Encouraged by then-Museum director, Samuel Barrett and anthropologist Alanson Skinner, he conducted studies on the use of plants by Wisconsin Indians during the 1920s and early 1930s. This was a time when many of the elders of the tribes with plant usage knowledge were nearing the end of their lives and the information was not being passed down to younger members.

Smith's work came to a sudden end with his death in 1933 as the result of an automobile accident. At the time of his death, four manuscripts had been published (Smith 1923, 1928, 1932, 1933), one was in process and published in 1998 by Kindscher & Hurlburt, and field notes remained for a sixth on the Oneida.

Browse the Ethnobotany collection on our Archive >>