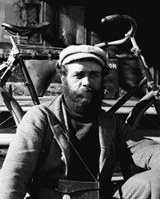 Sumner W. Matteson wearing his Denver Athletic Club jacket and sweater taken in Denver about 1900. On his Victor Safety No. 3 bike are his tool case and his Kodak No. 5 cartridge camera.

For the next several years, it appeared that Matteson would follow his father, uncle, and brothers into the world of banking. He clerked two years at the family bank in Decorah, followed by another three years in Great Falls, Montana at the bank where his older brother Herbert was head cashier. Yet in 1895, the year his father died, Matteson broke with family tradition and became the St. Paul agent for the Overman Wheel Company, makers of the popular Victor bicycle.

After only a year of selling Victor bicycles in St. Paul, Matteson moved to Colorado to manage the Overman operation in Denver. Besides selling Victor bicycles, the Denver Branch of the Overman Wheel Company also carried a complete line of Kodak cameras and Kodak supplies. Matteson soon combined the two facets of his business, taking his camera on his bicycle excursions.

By 1899, he was calling himself an "amateur photographer," so when the Overman Wheel Company pulled out of Denver in 1899, Matteson was already embarked on his new career as a "traveling correspondent."

From 1898 to 1908, Matteson crisscrossed North America taking photographs. Primarily a photojournalist, Matteson charmed his way into other people's work places and social celebrations. He produced some of the earliest photographic essays on the changing American West. Between 1898 and 1901, he photographed the elusive Ute Indians, the cliff dwellings of Mesa Verde, and the life and rites of Pueblo Indians in New Mexico and Arizona. In 1904, Matteson spent four months traveling the length of Cuba. In 1905 and 1906, he was in Montana to photograph the Fourth of July celebrations at the Ft. Belknap Reservation and the ranch life of the Flathead Indians. In 1907, Matteson spent 10 months in Mexico photographing old churches, Peons, ruins, and fiestas. During the Summer of 1908, he toured the Pacific Coast from San Francisco north to Seattle and Vancouver photographing fishermen and loggers.

In 1909, Matteson settled in Milwaukee -- perhaps because he had tired of traveling, perhaps because he needed a steady income -- and worked as a bookkeeper for the Milwaukee Coke and Gas Company then for the First National Bank. But he did not give up photography completely. He photographed Milwaukee. The Milwaukee River was one of his favorite settings: People skating, harvesting ice, swimming, and canoeing.

Early in 1920, Matteson returned to Mexico. By September of 1920, he was planning a long stay and was ready to renew his life as a full-time photographer. A month later, he was dead. He had climbed Mt. Popocatepetl with some American friends, and, after they had left, he stayed on to photograph some students who had come to climb. It appears that he stayed too long; he developed pulmonary edema. He was able to make it back to Mexico City where he died the next morning.

Matteson's photographs are transitional, as was the world in which he lived. Part romantic past and part realistic present, they are the travel records of an adventurer who saw the frontier become a settled society.

While there are landscapes and scenic photographs among Matteson's work, most of his photographs are of people. The wealthy and the poor, the famous and the nameless, people at work, people at play, men, women, children, Matteson found satisfaction in photographing them all -- people going about the business of life, of making a society.

The Museum has over 4,000 negatives purchased from the Matteson estate in 1922. Most of these negatives are in a 5x7 format and are on nitrate film. The major portfolios by location are: Hopi Indians in Arizona; Plains Indians at Ft. Belknap, MT; Cuba; Mexico; California; and Milwaukee, WI.

View this collection on our Archive.