This collection is comprised of a scrapbook and a complete female little-person's outfit associated with Deakin's Lilliputian Comic Opera Company (DLCOC ). These artifacts date to the early 1880s during the company's production of Jack the Giant Killer, a play that featured little people as regular sized people, and a tall man as a giant. The show was quite successful with high society and toured through the United States and Canada. DLCOC performed in dime theatres in the Milwaukee area. The clothing is an example of a small-size middle class woman's everyday outfit of the 1880s, and includes a dress, corset, camisole, bloomers, shoes, and gloves. The scrapbook features pictures of the company of actors (almost all of the known little people actors of the era) in their costumes. The Museum acquired the clothing and scrapbook in 1987. 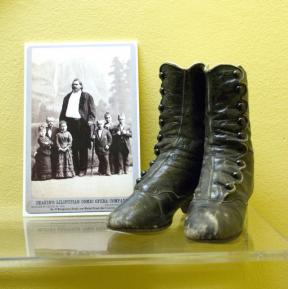